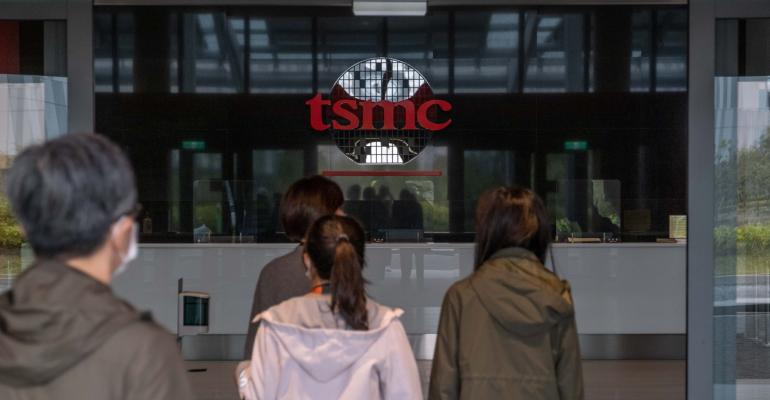 TSMC is navigating its biggest challenges in years: political tensions and a slowing economy that's weighing down the chip industry.

(Bloomberg) -- Taiwan Semiconductor Manufacturing Co. is bracing for weaker-than-expected sales by reducing spending, deepening concerns the technology industry’s slump is yet to bottom.

The chip giant signaled this quarter could mark its first revenue drop in four years. But executives forecast slight growth for the full year on an expected recovery in demand for server chips.

The company is betting on its technology and scale advantages to weather the worst of the slowdown. The US has tightened China chip trade controls, while rising interest rates, soaring inflation and concerns of a potential global recession have caused consumers to curb spending on smartphones and computers.

“Demand is softer than we thought three months ago,” Chief Executive Officer C.C. Wei said on a conference call. TSMC and its customers will be “more prudent” about their expectations for demand and supply over the coming months, he said.

The world’s biggest contract manufacturer of chips, which is the exclusive supplier of Apple Inc.’s Silicon chips for iPhones and Macs, may also have been affected by problems at the US tech giant’s assembly operations in China. Apple was forced to trim output estimates after Covid-related chaos at a plant in Zhengzhou exposed vulnerabilities in the company’s supply chain.

"Overseas capacity expansion will be front and center for now, especially in the US and Japan, as TSMC pushes to meet customers’ diversification requests and rises to the challenge of growing competition from Samsung and Intel. Rapidly rising depreciation and operation costs, coupled with increasing uncertainty for smartphone demand recovery, are capping its gross margin," says Bloomberg analyst Charles Shum.

First-quarter sales will be $16.7 billion to $17.5 billion, TSMC said, missing analysts’ average prediction for $17.9 billion. First-half sales will fall by mid- to high single-digit percentage, the company said, predicting a recovery in the second half that will mean slight growth for the whole of 2023.

“TSMC’s guidance for the first half is about in line with analyst expectations, while its forecast for the full year is better than feared,” said Jeff Pu, an analyst at Haitong International Securities. Growth in the second half will be supported by demand from customers such as Advanced Micro Devices Inc., Nvidia Corp., and Apple, he said.

Shares of Hsinchu-based TSMC, Taiwan’s most valuable company, fell 27% last year — after doubling during the pandemic — and are up about 8% this year. The company reported after the close of Taipei trading. Shares of ASML Holding NV, the world’s biggest chip-gear maker and a major supplier to TSMC, advanced about 1% in Amsterdam trading.

Some of the biggest Wall Street banks have turned cautious on TSMC. Last week, Goldman Sachs Group Inc. and UBS Group AG said they expect its sales to be little changed in 2023, with the latter cutting its price target on the stock. Analysts have cut their average target by 39% over the past 10 months to the lowest in two years, according to data compiled by Bloomberg.

The company and its customers still expect the long-term trend in electronics demand to keep going up. Last month, TSMC kicked off mass production of next generation chips and increased its investment in the US state of Arizona to $40 billion.

TSMC’s technology leadership gives it an advantage in pricing even as the broader industry languishes. Its gross margin — a measure of profitability — expanded to a record 62.2% last quarter from 52.7% a year earlier, also helped by favorable foreign exchange rates and efforts to curb costs. The company warned, however, that rising prices and its plans to ramp up production overseas could squeeze the metric.

Global policymakers are leery that much of their access to leading-edge chips hinges on Taiwan, an island that Beijing has threatened to invade. Key clients including Apple have called on TSMC to diversify its advanced chipmaking. The company is considering building a second plant in Japan, as well as an automotive chips factory in Europe, executives said.