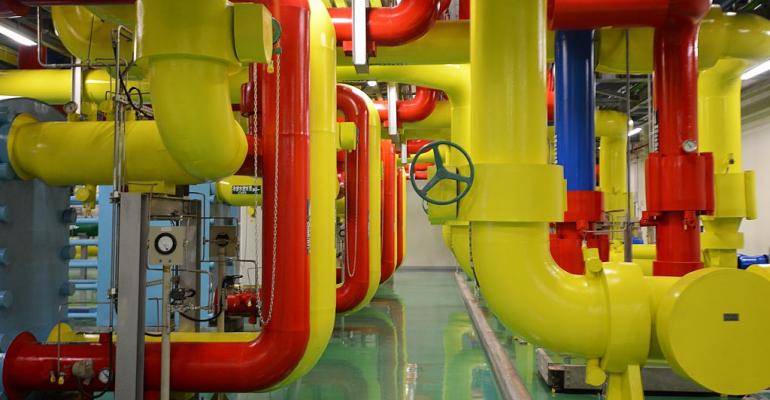 Water-scarce cities have to make trade-offs between conservation and economic development, and cash-rich Google is a big draw.

Nikitha Sattiraju (Bloomberg) -- In August 2019, the Arizona Municipal Water Users Association built a 16-foot pyramid of jugs in its main entrance in Phoenix. The goal was to show residents of this desert region how much water they each use a day—120 gallons—and to encourage conservation.

“We must continue to do our part every day,” executive director Warren Tenney wrote in a blog post. “Some of us are still high-end water users who could look for more ways to use water a bit more wisely.”

Related: Here’s How Much Water All US Data Centers Consume

A few weeks earlier in nearby Mesa, Google was finalizing plans for a giant data center among the cacti and tumbleweeds. The town is a founding member of the Arizona Municipal Water Users Association, but water conservation took a back seat in the deal it struck with the largest U.S. internet company. Google is guaranteed 1 million gallons a day to cool the data center, and up to 4 million gallons a day if it hits project milestones. If that was a pyramid of water jugs, it would tower thousands of feet into Arizona’s cloudless sky.

Alphabet Inc.’s Google is building more data centers across the U.S. to power online searches, web advertising and cloud services. The company has boasted for years that these huge computer-filled warehouses are energy efficient and environmentally friendly. But there’s a cost that the company tries to keep secret. These facilities use billions of gallons of water, sometimes in dry areas that are struggling to conserve this limited public resource.

“Data centers are expanding, they’re going everywhere. They need to be built in a way that ensures they are not taking critical resources away from water-scarce communities,” said Gary Cook, global climate campaigns director at Stand.earth, an environmental advocacy group.

Google considers its water use a proprietary trade secret and bars even public officials from disclosing the company’s consumption. But information has leaked out, sometimes through legal battles with local utilities and conservation groups. In 2019 alone, Google requested, or was granted, more than 2.3 billion gallons of water for data centers in three different states, according to public records posted online and legal filings.

Clashes over the company’s water use may increase as it chases Amazon.com Inc. and Microsoft Corp. in the booming cloud-computing market. Google has 21 data center locations currently. After pumping $13 billion into offices and data centers in 2019, it plans to spend another $10 billion across the U.S. this year.

“The race for data centers to keep up with it all is pretty frantic,” said Kevin Kent, chief executive officer of consulting firm Critical Facilities Efficiency Solutions. “They can’t always make the most environmentally best choices.”

Google often puts data centers close to large population hubs to help its web services respond quickly.  Sometimes that means building in hot and dry regions. The processing units inside heat up easily and water is needed to cool them down.

“We strive to build sustainability into everything we do,” said Gary Demasi, senior director of energy and location operations at Google. “We’re proud that our data centers are some of the most efficient in the world, and we have worked to reduce their environmental impact even as demand for our products has dramatically risen.”

In Red Oak, Texas, a town about 20 miles south of Dallas, Google wants as much as 1.46 billion gallons of water a year for a new data center by 2021, according to a legal filing. Ellis County, which includes Red Oak and roughly 20 other towns, will need almost 15 billion gallons this year for everything from irrigation to residential use, data from the Texas Water Development Board show.

Many parts of Texas are already seeing high water demand, according to Venki Uddameri, director of the water resources center at Texas Tech University. “With climate change, we are expected to have more prolonged droughts,” he said. “These kinds of water-intensive operations add to the local stress.”

Water-scarce cities have to make trade-offs between conservation and economic development, and cash-rich Google is a big draw. “It’s a constant battle in Texas because of wanting both,” said Uddameri.

In August, Google filed a petition with the Public Utility Commission of Texas to strip a local utility in Red Oak, Rockett Special Utility District, of its federal right to be the sole water supplier to the property. Google said it filed the petition after Rockett confirmed it doesn’t have the capacity to meet the company’s demands. If approved, the petition would let Google get water from another provider.

Rockett contested this in a legal response and said Google provided little information on how the water will be used, both in its application to the utility and in “vague” conversations involving company representatives. Despite that, Google made “incessant” requests for the utility to assess if it can meet the company’s water needs, Rockett said in legal filings.

Rockett brought a case against Texas’ public utility commissioners for refusing to dismiss Google’s petition despite being aware of the utility’s rights. Rockett has a loan guaranteed by the U.S. Department of Agriculture, giving it special federal protection — part of a long-running program to support rural water providers. When a Google entity, Alamo Mission LLC, found out about this, it ignored the protections and “intensified its efforts to diminish and alter the territory” that Rockett serves, the utility said in the legal filing. Alamo Misson is named as a defendant in the case. Lawyers for Rockett declined to comment on the ongoing case.

The planned data center in Red Oak would be Google’s second in Texas. It struck a deal with the city in July 2019. Red Oak officials told residents about Google’s plans ahead of time, according to Todd Fuller, the city manager. There wasn’t much concern about the impact the data center could have on local resources including water, according to Fuller. “Our water system is pretty robust,” he said, adding that the city doesn’t use its full water capacity.

Red Oak isn’t so laid back about water use on its website, though. On a page dedicated to water conservation, the city says it gets half its water supply from Dallas and encourages residents to reduce water use because Dallas’ six reservoirs are 18% depleted. Mandatory water restrictions will kick in if those sources become 35% depleted. Fuller did not respond to requests for comment on the matter.

Google said it doesn’t use all the water it requests, but the company must make sure enough is available for periods of high demand, or when the weather’s particularly hot. That’s necessary to keep internet services reliable, according to the company.

Google’s data center water use became a subject of controversy last year in Berkeley County, South Carolina. An environmental group opposed the company’s request for 1.5 million gallons of groundwater a day from what it said was a “historically threatened” source.

Google has been trying to secure the 1.5 million gallons—triple the daily amount it’s currently allowed in Berkeley County—since 2016. The Coastal Conservation League took issue with Google’s refusal to share information on how it will be using the extra water. Despite the opposition, the South Carolina Department of Health and Environmental Control granted Google’s request, triggering a backlash from some residents.

The conservation league called out the DHEC for giving Google so much water while asking a local public utility, Mount Pleasant Waterworks, to reduce its withdrawal from the aquifer by 57% over the next four years. The utility exceeded its previous peak use demand by 25% in May 2019, one of the driest months last year in Berkeley County, according to Clay Duffie, general manager of Mount Pleasant Waterworks.

“It’s unfair that the DHEC is asking us to reduce our water withdrawal while someone like Google can come in and ask for three times more than their original permit and get it,” Duffie said.

Google eventually backed off its groundwater request and reached an agreement with the league to only use it as a last resort. The deal still lets the company withdraw groundwater if there’s a shortfall, when conducting maintenance, or when demand exceeds available potable or storm water supplies during peak user activity.

The Arizona town of Mesa, where Google plans a 750,000 square-foot data center, gets half its water from the drought-prone Colorado River. A contingency plan was signed into law last year requiring states dependent on the river to take voluntary conservation measures. Still, Mesa officials say they remain confident about future supply while continuing to remind residents to limit their water consumption. “We do not have any immediate concerns,” said Kathy Macdonald, a water resources planning adviser with the city. In 2019, Mesa used 28 billion gallons of water, according to Macdonald. City officials expect that to reach 60 billion gallons a year by 2040, a demand Mesa is capable of meeting, she said.

Big companies like Google wouldn’t locate to the city if it couldn’t meet their water demands, Macdonald said. Mesa passed an ordinance in 2019 to ensure sustainable water use by large operations and fine them if they exceed their allowance.

Google has toiled for years to reduce the carbon footprint of data centers. Today, the facilities churn out a lot more computer power for every watt of energy used. In its 2019 environmental report, the company argued that reducing its energy use also makes it more water-efficient. “Generating electricity requires water, so the less energy we use to power our data centers, the less water we use as well,” it said.

However, data center experts say there’s usually a trade-off between water and energy use. “If the water consumption goes down, energy consumption goes up and vice versa,” said Otto Van Geet, a principal engineer at the National Renewable Energy Laboratory.

Google relies on “evaporative cooling,” which evaporates water to cool the air around the processing units stacked inside data centers, according to its environmental report. The most common systems, known as computer room air conditioners, are energy intensive. Evaporative cooling uses less energy, but the process requires more water. Operators will often embrace the thirstier approach because it’s less expensive, said Cook from Stand.earth.

“Water’s cheap. In many places, the energy costs are much higher” he added.

Google has paid more attention to water use in recent years. It relies on recycled water or seawater where it can to avoid using drinking water or draining local supplies. Google also says it saves water by recirculating it through cooling systems multiple times. In Mesa, the company is working with authorities on a water credits program, but said it’s too early to share more details.

From 2007 to 2012, Google used regular drinking water to cool its data center in Douglas County, just outside Atlanta. After realizing the water “didn’t need to be clean enough to drink,” the company shifted to recycled water to help conserve the nearby Chattahoochee River. It’s difficult to use similar approaches for other data center locations because the required technology isn’t always available, according to the company.

“The Chattahoochee provides drinking water, public greenspace and recreational activities for millions of people,” the company said in a blog post at the time. “We’re glad to do our part in creating an environmentally sustainable economy along the shores of the Hooch.”