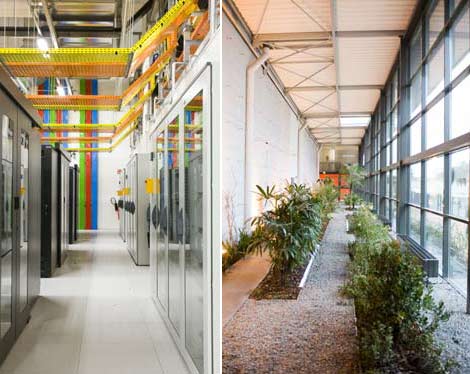 A growing number of data centers are redirecting the heat from their hot aisles to nearby homes, offices, greenhouses and even swimming pools. The ability to re-use excess heat from servers is being built into new data centers, helping to improve the energy efficiency profile of these facilities. We've pulled together some interesting examples of heat recycling below.

The latest example comes from Telecity, which is using waste heat from its new Condorcet data center in Paris to heat an on-site Climate Change Arboretum, where scientists will recreate the climatic conditions expected to prevail in France in 2050. Société Forestière and the French National Institute for Agricultural Research (INRA) will use the arboretum to grow and research plants from around the world with the aim of selecting those species most adaptable to changes in the prevailing climatic conditions.

Redirection of 'Hot' Air from the Aisle

Excess heat from servers at the new Telehouse Westdata center in the Docklands section of London will soon be used in nearby houses and businesses. The waste heat from the $180 million Telehouse colocation facility will be used in a district heat network, which is expected to produce up to nine megawatts of power for the local Dockland community.

An IBM data center in Switzerland is being used to heat a nearby swimming pool. Hot air generated by the Uitikon center will flow through heat exchangers to warm water that will be pumped into the nearby community pool. IBM says the volume of heat thrown off by GIB-Services’ data center is enough to warm 80 homes. Or one swimming pool, it would appear.

Treehugger.com reports that waste heat from a data center in Finland underneath Uspenski Cathedral (a popular tourist spot) will warm up water pipes and channel it to nearby homes for heating. The planned data center for information technology services firm Academica would be capable of providing enough heat to warm up 500 large private houses.

IBM and Syracuse University (New York)
Recycling Waste Heat in Nearby Buildings
A data center built by IBM and Syracuse University uses gas-powered micro-turbines to generate on-site power. During the winter, the 585 degree F (307 C) exhaust from the micro-turbines flows through heat exchangers to produce hot water, which is then piped to a nearby office building to be reused in the building’s heating system.

Notre Dame University (Indiana)
Data Center Heats A Greenhouse
The Notre Dame Center for Research Computing has placed a rack of high-performance computing (HPC) nodes at a local municipal greenhouse, the South Bend Greenhouse and Botanical Garden, to help heat the flowers and plants in the facility.

Quebecor (Canada)
Companies Reuse Data Center Waste Heat to Improve Energy Efficiency
Quebecor channels excess heat produced by servers at its data center in Winnipeg, Canada to the nearby offices of a local newspaper. The company ran a second duct out of the exhaust plenum to the intake duct of the editorial office upstairs. The process was controlled by pneumatic baffles that open and close depending on readings of thermometers within the ducts.