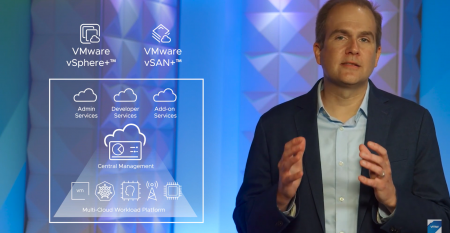 VMware Customers Could Bolt After Broadcom Acquisition
Jun 06, 2022
Industry analysts weigh in on what Broadcom's $61 billion VMware acquisition would mean for the virtualization...

Broadcom to Buy VMware for $61 Billion in Record Tech Deal
May 26, 2022
The deal follows Broadcom's acquisitions of CA Technologies in 2018, and Symantec Corp.’s enterprise security business in 2019.

Broadcom in Talks to Acquire Cloud Company VMware
May 23, 2022
A deal for VMware would rank among the biggest-ever acquisitions of a technology company.

Nvidia Aims vSphere-Integrated AI Software Suite at Enterprise Market
Aug 30, 2021
The AI leader has designed the software together with VMware to make AI easier for both data scientists and enterprise IT pros.

Vapor IO, VMware, and Zayo are Building 'Multi-Cloud Services Grid' for Edge-to-Edge Connectivity
Jun 09, 2021
The Open Grid Alliance's vision of an edge-first internet is becoming a reality with the announcement of Multi-Cloud Services...

Why You Still Need Virtualization with Kubernetes
Jun 03, 2021
The seemingly binary decision between less infrastructure and more infrastructure is a false choice.

VMware Names Company Veteran Raghu Raghuram Its Next CEO
May 12, 2021
Sanjay Poonen, who was reportedly vying for the job, is leaving the company.

Vapor IO and VMware's Open Grid Alliance Aims to 'Rearchitect the Internet'
May 04, 2021
A group of vendors has banded together to form a trade association of sorts to define a vision for a distributed, edge-first internet.

Dell Will Spin Off VMware, Unwind Part of Biggest Tech Deal
Apr 15, 2021
Its acquisition of former VMware parent EMC helped Dell branch out from its origins as a PC maker, but left the company saddled with debt.
Load More