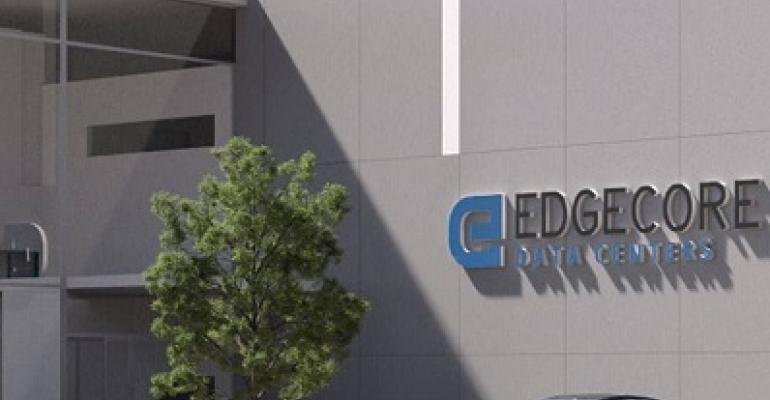 Denver-based EdgeCore Internet Real Estate was unveiled this week, announcing initial plans to invest $2 billion in the North American data center market, backed by the Singapore government’s global investment arm GIC and Canada's OPTrust pension fund. These same players have both the inclination and the means to double the initial investment if market demand is there.

He wasn’t very good at retirement, Ray said in an interview with Data Center Knowledge, saying that his goal now was "to quickly fill the spot DuPont Fabros has vacated in the wholesale data center space."

A seasoned data center executive, he is best known for spearheading Carlyle Group's CoreSite Realty data center initiative in 2001, leading the CoreSite IPO in 2010, and then delivering outstanding shareholder returns until retiring from his CEO post in 2016.

Joining Ray at EdgeCore is a handful of former CoreSite managers and executives, filling key C-Suite roles, from CFO to Chief Revenue Officer.

Ray's goal is to have three campuses under construction in early 2018, serving Phoenix, Dallas, and Reno, Nevada. "We are all production builders," he said about himself and his established competitors.

First up will be the 50-acre Mesa, Arizona, campus in the Phoenix metro master planned for seven data centers totaling 1.25 million square feet and 225MW of critical IT load. EdgeCore plans to break ground on the first 180,000-square foot two-story data center by the end of this quarter.

The powered shell will have 40MW utility power providing 32MW critical IT load, with a flexible design offering N, N+1, and 2N resiliency. The building is designed to achieve LEED Gold certification and meet or exceed Tier III standards. Customers will have renewable energy options at all three campuses. Ray said he intends to leverage best practices, including modular design, and a supply chain approach similar to CyrusOne’s to deliver high-speed, low-cost powered shells with a goal of offering 12-week turn-key data hall buildouts. Air-cooled chillers utilizing economization are expected to ensure a PUE below 1.25.

EdgeCore expects the Mesa powered shell to be close to completion by the end of the year. The ball is already rolling, with utility deposits made and shop drawings for the pre-cast structure approved for production, Ray said. EdgeCore is planning to use the same design on the 30 acres of land it has purchased in Richardson, Texas (the Dallas-Fort Worth metro), and a 56-acre site near Reno. Those two campuses are planned for 900,000 square feet and 1.08 million square feet of data centers respectively. EdgeCore will offer custom build-to-suit, turnkey, powered shell, and powered infrastructure options.

The company’s go-to-market plan is ambitious, even for an experienced team. In addition to the three campuses described above, its business plan anticipates acquiring land in three other Tier 1 markets. Ray was not at liberty to say which ones, but it would be surprising if Northern Virginia and Chicago were not on the shortlist.

He expects that having enterprise-quality wholesale product at scale in six different North American markets will give EdgeCore an advantage over many competitors. There are relatively few barriers to entry in most Tier 1 markets, Chicago and Silicon Valley being the notable exceptions. Building in Reno, a low-latency alternative to Silicon Valley, will help EdgeCore meet its condensed timeline to operate across six key markets.

Ray intends to offer a high-touch operating environment for EdgeCore wholesale offerings while keeping non-production costs low to offer competitive wholesale pricing. (This approach should sound familiar to former DuPont Fabros shareholders.) In the future, EdgeCore also intends to offer colocation and cabinet options for enterprise customers, which would make its portfolio more along the lines of CyrusOne's full-range solution approach.

Ray is one of a handful of executives who have successfully built a data center operation from the ground up that went on to become a successful publicly traded REIT. CoreSite's connectivity-focused retail colocation business model was slow to evolve, but that’s natural. These facilities grow organically over many years, and eventually the interconnection ecosystems evolve into competitive moats. Slow and steady wins that race.

EdgeCore is a different animal – more a hare than a turtle. Ray's plan is to have six data center campuses of 100MW to 200MW underway in North America by 2019. EdgeCore is also working without the safety net of anchor tenants lined up to de-risk each development, making it easier to meet its ambitious schedule. It will be crucial for investors to keep an eye on EdgeCore’s effect on supply-demand fundamentals and pricing in wholesale markets which never anticipated that these large campuses would pop up.

I expect this announcement will make the Q&A portions of upcoming Digital Realty, CyrusOne, and QTS Realty earnings calls much livelier. Perhaps there are even fewer barriers to entry into the wholesale data center business than most investors realized.