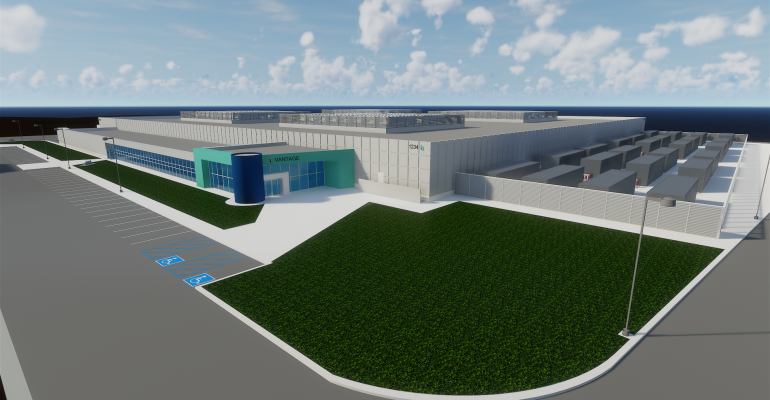 Vantage Data Centers
Rendering of one of the data centers on the future Vantage campus in Ashburn, Virginia
Business

Vantage had previously focused mainly on the Silicon Valley, having purchased a former Intel facility in Santa Clara back in 2010, which it has been developing in phases, creating what is now one of the Valley’s largest data center campuses. In 2016, Vantage secured land for a second Santa Clara campus, making it the largest wholesale data center provider in the region. The company also operates a data center campus in Quincy, Washington.

Related: Half a Million Square Feet of Amazon Data Center Space Under Construction in Virginia

The Vantage 42-acre Ashburn campus is currently planned for five buildings and 108MW of critical IT load at full build-out. It will require another $1 billion of invested capital to complete this campus. The initial phase consists of a 230,000-square foot facility providing 24MW of critical IT load and a central utility plant for the project.

Back in March 2017, Digital Bridge CEO Marc Ganzi said in an interview with Data Center Knowledge, "At the end of the day, Vantage will be able to expand if customers have confidence and want to follow Vantage into other markets to assist with future capacity needs."

He is based out of Northern Virginia and will immediately give Vantage boots on the ground in North America’s largest data center market. He is a familiar face to call on key hyper-scale customers, including Facebook, Apple, and Microsoft, that have accounted for much of the net absorption of super-wholesale data center space in Ashburn.

Choksi told Data Center Knowledge that, "The wholesale data center business is not for the faint of heart." He compared it to "elephant hunting" due to the lumpy nature of landing large-scale deployments. It can also become a dicey zero-sum game, "with a long sales cycle where operational expertise and trust come into play," Choksi said.

While Vantage does not comment on its existing customers, published reports over the years have mentioned several tenants in Santa Clara, including: Symantec, Cloudera, MarkLogic, Microsoft, Arista, and VMware. Choksi said that about 90 percent of his customers lease in both Silicon Valley and Northern Virginia. (They’re leasing from Vantage’s competitors in Virginia.) While Ashburn a clear priority, Choksi is "actively evaluating further expansions," noting that a Vantage pin in the middle of the US map would make sense for existing customers.

One of the trends over the past few years has been for hyper-scalers to buy land of their own in top-tier markets. Some market observers believe this is one of the larger risk factors threatening the colocation business model. However, Choksi believes that companies will continue to do both lease and build their own data centers depending upon: 1) time-to-market considerations; 2) cost of occupancy, which is always a factor; and 3) demand in a location by the hyper-scaler’s own customers (if demand is difficult to predict, leasing is more attractive).

Does supply create demand in top-tier data center markets? Five years ago, Choksi says, he thought that question was a joke, or perhaps a mantra of brokers hungry for inventory to lease.

However, the situation on the ground has changed significantly since late 2015. In fact, a lack of supply has been the biggest impediment to leasing in the four biggest US markets; Chicago, Dallas, Northern Virginia, and Silicon Valley have had limited inventory of multi-megawatt data halls available during the past two years.

One vivid example of the supply-creates-demand dynamic would be Atlanta metro. Choksi said he was "a bit surprised" to see how quickly Atlanta became a top-tier regional market.

During the past few months, announcements by Switch and CyrusOne, joining QTS Realty, T5, Ascent, and Digital Realty, have combined to put Atlanta on the map as a wholesale data center destination.

It is easy to forget that for several years prior to 2014 there was an oversupply of speculative wholesale data center space in Santa Clara. However, hyper-scale cloud customers needing to lease space to serve their own customers absorbed most available inventory by mid-2016.

Choksi believes it would take two to three years for a new competitor to enter the Santa Clara data center market, with availability of utility power being just one hurdle to overcome.

However, Ashburn is a very different market than Santa Clara. There are many highly qualified data center operators active in Northern Virginia that have relationships and a track record with major hyper-scale cloud, SaaS, and social media firms. There are relatively few barriers to entry.

The scale of the powered shells under construction in Ashburn, Manassas, and other Virginia submarkets is massive. It is now becoming more common to see 30MW-plus designs being built with variable power density and resiliency options and ability to be configured into smaller data halls or leased to a single hyper-scale user.

The combined Digital Realty and DuPont Fabros ACC campus offering is now a dominant presence in Ashburn and offers many options for both existing and new customers. It remains to be seen if adding Vantage to the mix in 2019 will noticeably change the leasing dynamics in a market that has absorbed over 100MW in the past two years.

The good news for Vantage is the firm only needs a relatively small piece of that pie to be successful.