This illustration depicts how an existing Sears Auto Center can be converted into a data center. Ubiquity Critical Environments is partnering with Schneider Electric to build a national chain of data centers in second-tier markets. (Image: Ubiquity)
Design 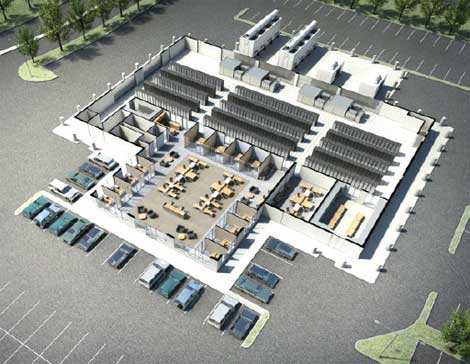 This illustration depicts how an existing Sears Auto Center might be converted into a data center.

One of America's retail pioneers may build a brand for the new economy, housing servers where it once changed your oil.

Ubiquity Critical Environments, the data center unit of Sears Holdings, is considering a concept to convert some of its Sears Auto Center stores into data centers. It is working with Schneider Electric, a leading provider of data center equipment and services, on a proposal to build and operate mission-critical facilities in a number of markets around the country.

The proposal marks an evolution of Ubiquity's mission to repurpose Sears' real estate holdings to capitalize on demand for data centers. Ubiquity was created by Sears to convert the retail icons of the 20th century into Internet infrastructure to power the 21st century digital economy. Farney initially explored converting old Sears and Kmart retail stores and warehouses into huge data centers. But it turned out that many of the most promising facilities were located near existing data center hubs, where Ubiquity would compete with existing providers.

Instead, Ubiquity has shifted its focus to smaller footprints in secondary markets. Farney says that Sears Auto Centers would be ideal for this strategy, especially the stand-alone centers.

"We have a unique asset, which is a lot of real estate that’s permitted and zoned so we can move quickly (if we take this beyond the concept stage)," said Farney.

The data center initiative could play a role in Sears strategy for its fleet of Sears Auto Centers. On Oct. 29, Sears said it would evaluate "strategic alternatives" for the auto centers, saying they offer "a unique national footprint that can be leveraged to create significant value." Much of the speculation has focused on a sale or spinoff of the auto center business.

“This concept is unrelated to our announcement from Oct. 29,” said Howard Riefs, spokesperson for Sears Holdings. “We continue to evaluate separating the Sears Auto Center business to allow it to pursue its own strategic opportunities, optimize its capital structure, attract talent, and allocate capital in a more focused manner while bringing Sears Holdings’ Business Unit structure to life outside of the Sears Holdings portfolio.” 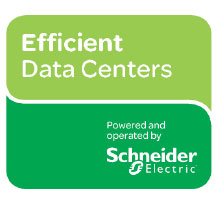 Ubiquity's concept would present a huge opportunity for Schneider Electric, which in recent years has been expanding its portfolio of services to address virtually every aspect of the data center business. Schneider would design, build, maintain and operate the data centers, which would be co-branded and jointly marketed by Ubiquity and Schneider. Each Ubiquity data center's branding would feature the motto "Efficient Data Centers: Powered and Operated by Schneider Electric."

“We’re bringing together many pieces to create a broader solution," said Mike Hagan, vice president of Schneider's Data Center Service Provider division. "We provided a fast way for Ubiquity to find all the resources they needed in a single partner. We can enter any space Ubiquity is targeting and add data center capacity in a modular fashion. This is not anything that’s new to us. We’re capable of engineering to any unique requirements."

Those capabilities were recently on display in a project in Seattle in which Schneider converted office space at Fisher Plaza into an 11,000 square foot data center for Tierpoint, including a seismic isolation system.

Farney believes the Ubiquity concept for the Sears Auto Centers would provide a winning template for data centers. While some auto centers are attached to mall-based retail stores, more than 50 are stand-alone facilities, often located on the perimeter of shopping malls. These sites are typically concrete buildings of between 25,000 and 50,000 square feet, with ceiling heights of at least 16 feet.

Ubiquity has proposed converting a number of these sites into data centers offering between 1.2 megawatts and 2.4 megawatts of IT capacity on a 10,000 square foot raised floor environment. The facilities would be engineered for at least 150 watts per square foot, supporting cabinets using 3kW to 10kW of power. Ubiquity and Schneider expect to build the data centers to meet Tier III standards and operate with high levels of energy efficiency, targeting a Power Usage Effectiveness of 1.3.
The fate of the Sears Auto Center portfolio has been the focus of speculation by securities analysts since Sears Holdings (SHLD) announced its strategic review two weeks ago. Analysts had thought a spinoff or sale would be a challenge, citing potential environmental concerns associated with automotive facilities. The Ubiquity/Schneider concept would provide a future path for at least a portion of the portfolio.

A key piece of Ubiquity's strategy would involve the use of modular designs to ensure a repeatable construction process that can bring capacity to market quickly. Farney is among the industry's most experienced executives in deploying modular data centers. He was part of the Microsoft team that in 2009 built a massive Chicago data center that housed servers in customized shipping containers.

The Sears Auto Center conversion concept would feature prefabricated modular "skids" of power equipment from Schneider Electric, which each support 600kW of data center capacity. Cooling would be provided by Schneider's EcoBreeze cooling systems, which can automatically switch between several cooling modes based upon local weather conditions, using free cooling on cool days and an on-board refrigerant cooling system on warmer days. This versatility allows EcoBreeze to be deployed in different parts of the country.

The EcoBreeze units could be housed outside the data center, while the power modules can either live inside or outside the facility. In outdoor implementations, the skid would be containerized. Schneider also offers StruxureWare software, which acts as a building management system (BMS) but can also monitor and manage IT equipment and provide DCIM and capacity management capabilities.

"We have several hundred kilowatts today in most of these locations," said Farney. "Some of the equipment in the auto center requires substantial power. Malls are built on a pretty robust feeder system, and there’s stranded power in many of these mall areas."

He acknowledges that not everyone may be ready for a data center next to the mall. "We have to make people comfortable with these data centers," said Farney. "The initial sites we’ve picked are far from the malls. It's really a stand-alone data center, with lots of land and setbacks to secure the facility, and it’s made of concrete."

Ubiquity would not be alone in contemplating secondary markets. As the major markets have become more crowded and competitive, a number of providers have begun building in smaller cities, most prominently 365 Main and Compass Datacenters. There are also a number of players that have succeeded with a regional focus.

But Farney believes there is still a major disconnect between supply-and-demand once you move beyond the major data center hubs. The growth of online video will further boost the demand for data storage located closer to the consumer.

"I think there’s a strong need for a data center product for second tier markets," said Farney. "They’ve clearly been neglected. We’re missing data centers in the heartland. We can keep doing what we’re doing, or we can put data centers closer to the people."

EDITOR'S NOTE: An earlier version of this story characterized the data center conversion plans as being firm. Sears Holdings now says the data center initiative is a proposal, and a separate issue from the strategic options being considered for the Sears Auto Center stores.