It's official: Facebook will build a massive data center in Altoona, Iowa. After a year of secret scouting missions, the social network today decloaked and confirmed its plans to invest $299.5 million to build the first phase of a three-building campus. 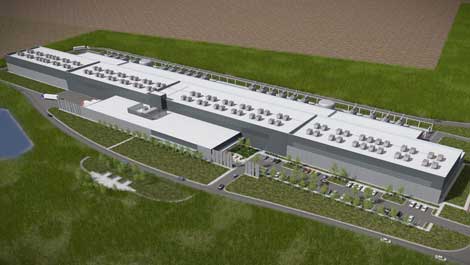 It's official: Facebook will build a massive data center in Altoona, Iowa. After a year of secret scouting missions, the social network today decloaked and confirmed its plans to invest $299.5 million to build the first phase of a three-building campus in Altoona, a suburb of Des Moines. Facebook says the 476,000 square foot building will be the world's longest data center, providing the company with a digital beachhead in the middle of the U.S.

"When complete, Altoona will be among the most advanced and energy efficient facilities of its kind," said Jay Parikh, VP of Infrastructure Engineering at Facebook, who announced the project in a blog post. "We’re excited to have found a new home in Iowa, which has an abundance of wind-generated power and is home to a great talent pool that will help build and operate the facility. We plan to break ground this summer and expect to begin serving user traffic in 2014."

Media reports have placed the value of the stealthy "Project Catapult" at $1.5 billion. Facebook isn't yet committing to that level of investment. But it plans to build a total of three data centers on its Altoona campus, which is nestled alongside Route 80 and has access to significant supplies of fiber and power.

"We've got 200 acres, so it's enough property to scale into three buildings if we need to," said Tom Furlong, Vice President of Site Operations at Facebook. "We have data centers on the West Coast in Oregon and on the East Coast in North Carolina, so this gives us something in the geographic center of the country. This location had fiber, power and a shovel-ready site. Iowa has really been actively looking for data centers."

“Today’s announcement further solidifies Iowa’s position as a destination for tech companies – from major data center operations like Facebook’s to the innovative start-ups we continue to see popping up around our state,” said Iowa Gov. Terry Branstad.

The data center would be Facebook’s fourth company-built project, with the others located in Oregon, North Carolina and Sweden. The facility will feature servers and storage using designs from the Open Compute Project, the open source hardware initiative organized by Facebook to share and improve its server and data center designs. Furlong said there will be some refinements of the data center designs, based upon efficiency data accumulated in monitoring operations at the facilities in Prineville and Forest City.

"Each of our projects is somewhat of an evolution," said Furlong. The Altoona campus will feature slightly larger data center buildings, which will accommodate different arrangements of some infrastructure components to improve the facility's overall efficiency, Furlong said.

Wind Power in the Mix

One new wrinkle in Iowa will be inclusion of wind power in the utility mix. Facebook isn't yet ready to announce details of its plans to tap wind power, but appears ready to make its first major foray into renewable energy (although the company has a 100 kilowatt solar array at its Prineville data center).

The environmental group Greenpeace, which rarely misses a chance to comment on a major data center project, chimed in on the importance of adding renewables to Facebook's energy sourcing.

“In Iowa, Facebook has chosen a location where it has great potential to power its newest data center with the wind energy that is booming there, but to do so it must show a willingness to work with Iowa’s major utility, MidAmerican Energy, to provide more clean energy to the grid," Greenpeace International Senior IT Analyst Gary Cook. "MidAmerican is still powering its grid with a mix of mostly dirty energy sources like coal and gas. We expect Facebook to meet the ambition it has expressed in its renewable energy goals by following the example Google has set in Oklahoma and North Carolina and demanding that MidAmerican provide significant new renewable energy to Iowa’s grid to meet the expected large electricity demand of Facebook’s data center."

Wind energy accounted for 25% of all the electricity generated in Iowa in 2012, leading the nation in percentage of total generation from wind energy.