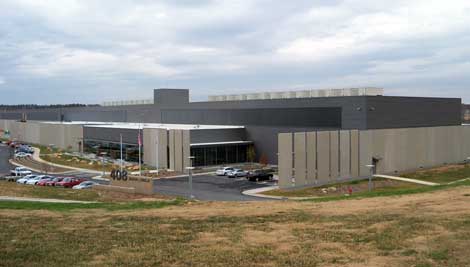 FOREST CITY, N.C. - You may never visit Rutherford County, North Carolina. But if you live on the East Coast, your data probably will.

Forest City is home to about 7,500 residents, as well as a major campus for Facebook. As a result, it has joined the ranks of rural towns that are populated by more servers than people.

Facebook has built two enormous data centers here to power its growing Internet infrastructure. The two-story structures each span more than 300,000 square feet. In an area dotted with modest restaurants and stores, the server farms resemble aircraft carriers dropped onto the landscape.

The company is investing about $450 million in these buildings, and outfitting them with the latest hardware and facility design innovations from the Facebook data center team and the Open Compute Project. Here's a quick look at the Forest City campus:

Each data center features four data halls packed with row upon row of cabinets housing Facebook's servers. This data hall ia in Facebook's first building (FRC1), which was filled within nine months of opening. Fresh air enters the building through the second floor "cooling penthouse" and then enters the first-floor data halls through openings in the ceiling above the center aisle. The screens hanging from the ceiling are diffusers, which help circulate the cool air so it reaches the outer edges of each row of cabinets. (Photo: Rich Miller) 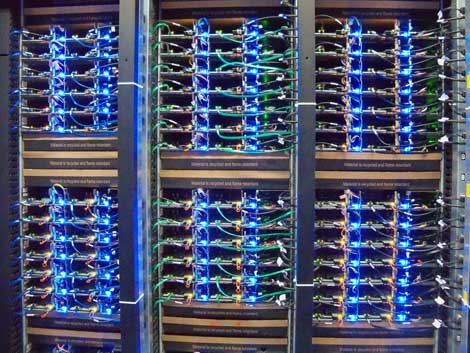 The data halls in FRC1 are packed with Facebook's "triplet" racks, which house server designs that contain two servers on each sled. Click the image to see a larger version. (Photo: Rich Miller) 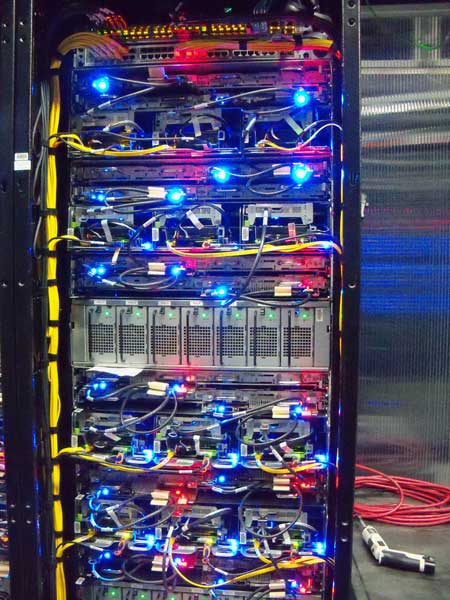 In the data halls at FRC2, Facebook is testing the Open Rack, a single cabinet designed for trays that are 21 inches wide, instead of the standard 19 inches. Each cabinet includes three "power zones" served by a tray of power supplies (which are now separate from the servers) that tie into a bus bar in the rear of the enclosure. Server trays house three servers, each 2U in height, which plug into the bus bar. The design also includes a storage tray filled with JBOD (Just a Bunch of Disks), which can be seen immediately below the power supplies. (Photo: Rich Miller) 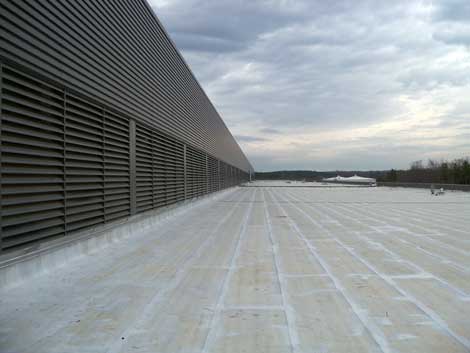 This vast roof provides a sense of the scale of the Facebook facilities in Rutherford County, each of which measure a quarter-mile from end to end. Click the image for a larger version.  (Photo: Rich Miller) 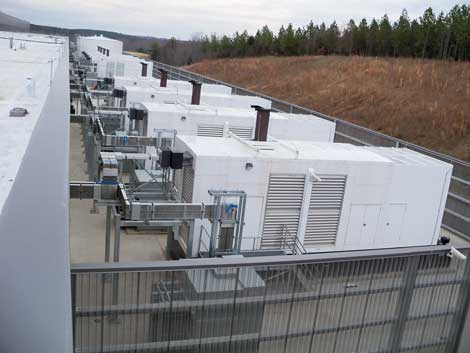 The equipment yard behind each data center houses 16 diesel backup generators. Two generators are dedicated to keeping components of the cooling system online, with the remainder protecting IT loads. The two large storage tanks (at the rear of the photo) are the midway point of the yard, with eight more gensets on the far side. (Photo: Rich Miller)