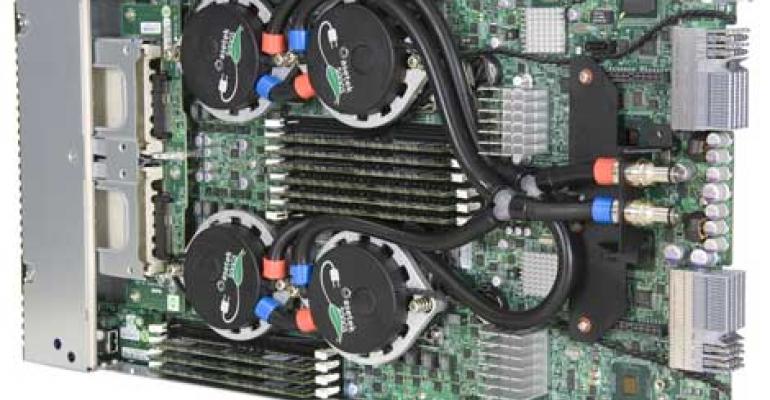 The U.S. Department of Defense (DoD) will soon begin cooling its servers with hot water. The DoD said this week that it will convert one of its data centers to use a liquid cooling system from Asetek, a move could clear the way for broader use of liquid cooling in high-density server deployments at the DoD. 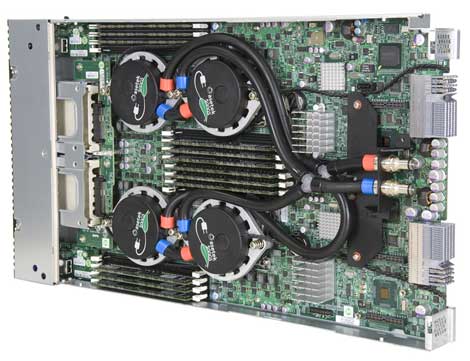 A server tray using Asetek's Rack CDU Liquid Cooling system, which is being implemented in a U.S. Department of Defense data center. The piping system connects to a cooling distribution unit. (Source: Asetek)

The U.S. Department of Defense (DoD) will soon begin cooling its servers with hot water. The DoD said this week that it will convert one of its data centers to use a liquid cooling system from Asetek Inc. The move could clear the way for broader use of liquid cooling in high-density server deployments at the DoD, which says it will carefully track the efficiency and cost savings from the project.

Asetek was selected for the $2 million project to retrofit of a major DoD data center with its direct-to-chip liquid-cooling technology called RackCDU (short for Rack Coolant Distribution Unit), which brings high-performance cooling directly to the hottest elements inside every server in a data cente, removing processor heat from servers without the use of traditional computer room air conditioners or water chillers.

The RackCDU solution uses hot water cooling, which allows it to work using only outside ambient air (free cooling). While most air cooling systems use chilled water at temperatures as low as 45 degrees, higher water temperatures are possible in tightly-designed and controlled environments that focus the cooling as close as possible to the heat-generating components. Turning off the chillers and CRAC units allows data center operators to lash the amount of power required to support their cooling system. (see Hot Water Cooling: Three Projects Making it Work for more examples of this approach).

“The Department of Defense has become very serious about improving data center efficiency, and they are seeking new approaches to address this mission-critical problem,” said Andre Eriksen, Asetek’s CEO and founder. “Hot water direct-to-chip liquid-cooling is a powerful approach that can capture more than 80% of the heat generated by a data center and remove it from the building, where it can be cooled for free by ambient air or even reused for building heating and hot water. No power what so ever goes in to actively chilling the water.”

Multiple federal mandates are driving the DoD to increase energy efficiency, increase the use of renewable energy and to consolidate data centers. Similar mandates affect data centers operated by other departments of the Federal government.

Liquid cooling has been used in government data centers that house supercomputers, such as those operated by the Department of Energy (such as Oak Ridge National Laboratory) and the National Security Agency (NSA). The DoD initiative extends liquid cooling to rack servers and blade servers as well.

The project will convert an existing air-cooled enterprise data center into a liquid-cooled data center, without disrupting operations during the transition, and with significant improvements in energy consumption, density (enabling consolidation within existing facilities), and creating opportunities to reuse energy by capoturing the waste heat from servers.

Asetek has been a leading supplier of liquid cooling solutions for high-performance gaming PCs and workstations, and recently announced its entry into the data center market.

In this video from SC12, Asetek founder & CEO André Eriksen describes the company's innovated hot water cooling technologies for HPC and Cloud computing in an interview with Rich Brueckner of InsideHPC.