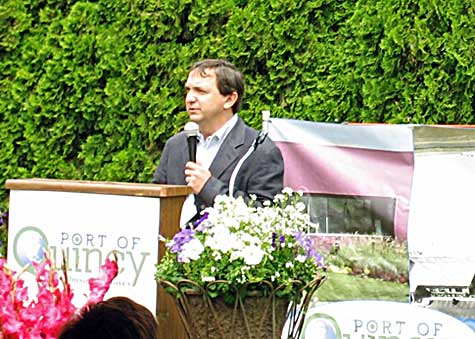 In confirming Timmons' departure, Microsoft made no mention of his destination. "Kevin Timmons, general manager of Datacenter Services, has decided to pursue other career opportunities and is no longer working at Microsoft," said Dayne Sampson, CVP of Global Foundation Services, Microsoft. "We appreciate the contributions he made to Microsoft during his time here."

But industry sources say Timmons is headed to Apple, whose top data center executive, Olivier Sanche, passed away suddenly last November. Dave Ohara, who has many sources at Microsoft and Apple from his time working at both companies, noted Timmons' career change.

"The position Kevin is going to fill is not known and is not the position vacated by the departed Olivier Sanche," Ohara writes on his blog. "Olivier's position has been filled by another data center operations executive."

Apple in Building Mode?
While Timmons' title and duties are not known, the hiring of one of the data center industry's master builders is bound to heighten speculation about Apple's cloud computing ambitions. In a report yesterday, Apple Insider noted that the company is posting positions for a team building "the future of cloud services at Apple," an effort it says will include some of the company's "most exciting new products and services." Earlier in the week reports emerged that Apple is planning more data centers in the U.S. and Europe.

Apple is widely presumed to be readying its iDataCenter to power a cloud-based “storage locker” that can house music, video and other media for iTunes users. For more details about the company's facilities, read The Apple Data Center FAQ.

Internet Scale on a Budget
Timmons has forged a reputation for building efficient Internet-scale data centers on a budget. At Microsoft, Timmons oversaw the deployment of massive new data centers in Dublin and Chicago shortly after his arrival in mid-2009, but then moved to streamline the company's data center design and cost structure. Timmons said his goal is for Microsoft’s data center network to be "incredibly scalable at awesome cost effectiveness," and said his team was on target to slash data center costs by 50 percent.

Some of Microsoft's innovations during Timmons' tenure are on display in its latest data center in Quincy, Washington, which is the culmination of years of design work at Microsoft Global Foundation Services, and offers dramatic reductions in cost and resources. The facility features a lightweight exterior (which Timmons likened to a "tractor shed") filled with highly-customizable containers packed with servers, storage and power and cooling infrastructure. The modules can be deployed as new capacity is needed, and configured with a mix-and-match approach that supports a variety of technologies and reliability levels.

Legacy at Yahoo
Timmons joined Microsoft in June, 2009. Prior to that he was vice president of operations at  Yahoo, where he oversaw the build-out of their data centers and infrastructure. Before that he was a director of operations at GeoCities, and also served as a senior software engineer at Marconi Dynamics.

While Timmons was at Yahoo, he oversaw the team that developed the company's "Computing Coop" design and led the site selection process that led Yahoo to build its flagship facility in Lockport, New York, where it runs on hydro-electric power and can use fresh air to cool servers.

Apple doesn't talk about its data centers. But if it is looking for an executive to "think different" about data centers, Apple may have found its man in Timmons.

"Challenge everything you know about a traditional data center," Timmons said in a March 2010 presentation at DataCenterDynamics New York. "From the walls to the roof to where it needs to be built, challenge everything."