VMware Wants to Be Your Single Platform for All Clouds

Kicks off VMworld by fleshing out its hybrid cloud vision

Following the Sunday kickoff of its VMworld conference in San Francisco, VMware started Monday by announcing a fleshed-out vision for hybrid cloud that unifies its many technologies and partnerships for infrastructure to run applications in enterprise data centers and public clouds.

Calling the vision simply VMware Hybrid Cloud Platform, the company said it was a single, uniform way to manage all your infrastructure, both in your own data center and in the cloud.

It is an evolution of the software defined data center idea, “and we think this is the right architecture for people going forward,” Kit Colbert, a VMware VP and cloud CTO, said on a call with reporters Thursday.

Underpinning the architecture is VMware Cloud Foundation, the software stack that integrates vSphere virtual compute, vSAN virtual storage, and NSX virtual network and can run on premises or in the cloud.

The hybrid cloud is managed across environments through tools in VMware’s vRealize suite, for which the company announced updates Monday. The updates in release 8.0 include improvements in vRealize Operations and vRealize Automation, such as machine learning-based troubleshooting, multi-cloud monitoring (AWS and Azure), automated workload provisioning, and integration with ServiceNow, Terraform, Ansible, Jenkins, Bamboo, and Git.

VMware also launched a new service, called CloudHealth Hybrid, which is a hybrid-cloud take on previously existing CloudHealth, designed to help users optimize costs and performance of their public cloud infrastructure. That functionality now extends across both public clouds and on-prem VMware environments.

On the public cloud side of this hybrid architecture today are Amazon Web Services, Microsoft Azure, Google Cloud Platform, and IBM Cloud.

VMware Cloud on AWS, the one in which VMware has invested more of its own time and resources than in any of the other joint services with cloud providers, is now available in 16 AWS availability regions around the world – four times the amount of locations one year ago, Colbert said.

VMware now offers the service – which is a VMware-operated cloud running on bare-metal servers inside Amazon data centers – in five regions in the US, one in Canada, one in South America, four in Europe, and five in Asia Pacific. 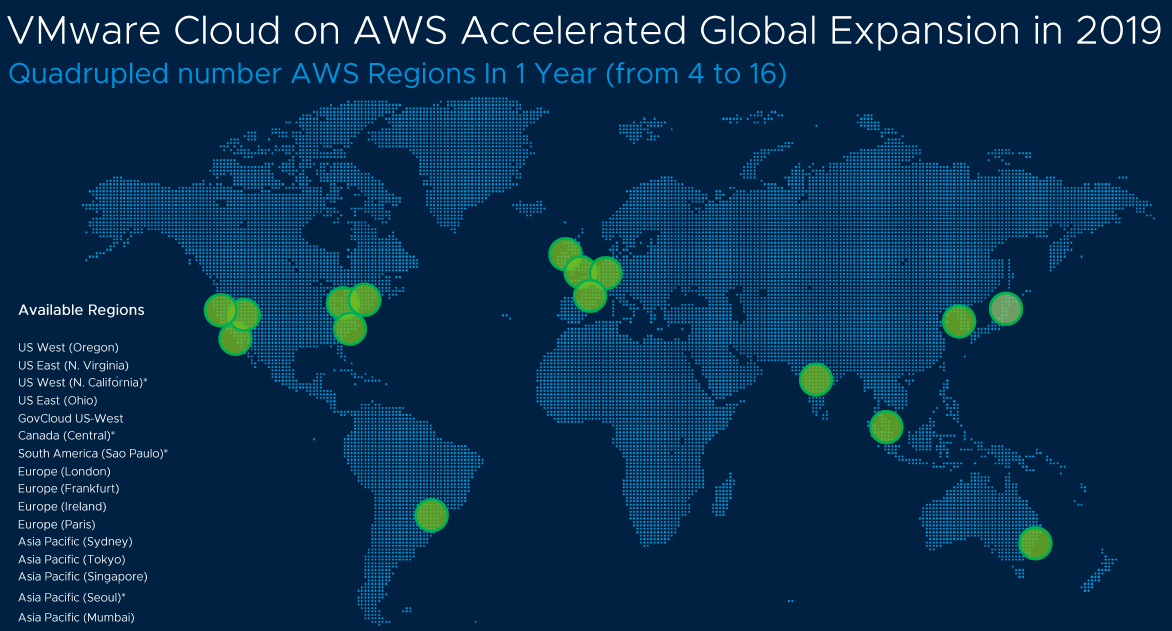 VMware Cloud on AWS availability regions as of August 2019

VMware claims to have trippled the number of customers using the service -- dropping some marquee enterprise-customer names, such as Accenture, ADP, Capgemini, Fujitsu, and Merck, among others -- and increased eightfold the total number of VMs running on its AWS cloud.

VMware Cloud on Dell EMC, the service where Dell installs the Dell EMC VxRail hyperconverged hardware with VMware Cloud Foundation in your data center or at an edge site, and VMware manages it for you as part of your hybrid cloud, charging you only for the capacity you use – similar to how companies consume public cloud services – is now generally available, the company announced. VMware and its parent company Dell Technologies announced the service’s beta launch earlier this year in Las Vegas, at Dell Technologies World.

This is the first product to come out of Project Dimension, the program VMware announced last year to deliver its software defined data center on premises as a service. According to Colbert, Dimension won’t be limited to hardware by VMware’s parent company.

The reason it launched on Dell hardware only was because it takes a massive integration effort, and it cannot be done quickly enough to launch with multiple vendors at once. “The level of integration that we’re doing here is much, much deeper than we’ve done before,” he said. “Over time you can expect to see us partnering with other hardware partners as well.”