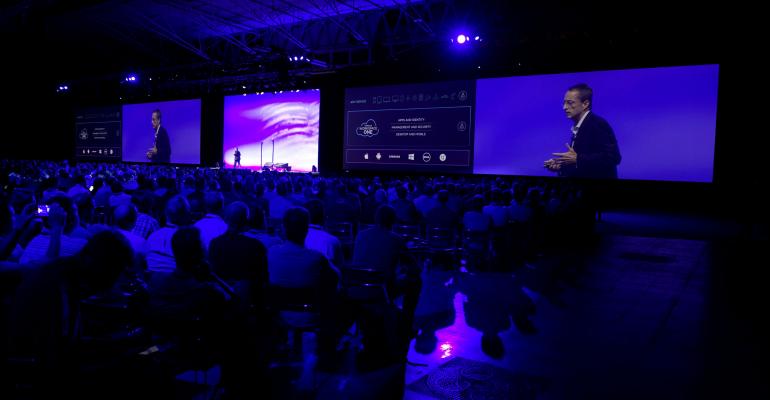 “This is the point in time when NSX-T becomes our lead platform for net new opportunities.”

VMware on Wednesday released a new version of its NSX-T Data Center software designed to simplify network virtualization, boost performance, and improve security in both private and public clouds.

Related: Service Meshes are Getting Hot in the Enterprise, and VMware Is Listening

While VMware continues to offer NSX-V for vSphere-only deployments, the company will steer new customers to use NSX-T, because most enterprises are moving toward mixed cloud environments, Tom McCafferty, VMware’s senior director of product marketing for NSX, told Data Center Knowledge.

“The significance of this announcement is that this is the point in time when NSX-T becomes our lead platform for net new opportunities,” he said. “We expect all greenfield business to be on NSX-T.”

Related: Why VMware is Expanding the Virtual Network Outside the Data Center

While previous versions of NSX-T Data Center focused on adding support for public clouds and platforms (such as support for containers running on bare metal), the latest release – NSX Data Center 2.4 – addresses ease of use, faster deployment through automation, and improved scalability and security.

“This whole release is about moving from the idea of NSX everywhere to NSX for everyone,” McCafferty explained. “We spent a lot of time making sure it runs on different platforms and making it available in every major public cloud. But what happens is you still have not shrunk the time to deploy or the ability to manage it. So, we are making sure everyone who has a hand in deploying things can use this. It’s got simplicity for the IT generalist, advanced details for the network architect, and visibility for everyone on our dashboards.”

VMware is one of the leaders in the growing software-defined networking market, where it competes primarily with Cisco Systems, Juniper Networks, and Nuage Networks.

As a result, vendors are focused on improving automation and operational simplicity as they help enterprises apply a consistent and uniform set of network and security policies across their private and public cloud deployments, he said.

“You will see intense competition among vendors,” Casemore said. “Customers will want support for cloud-native, containerized microservice environments, and multi-cloud environments. All the vendors, including VMware, have to be able to respond to that. It’s an active area of innovation.”

For example, Pluribus on Wednesday also released a new version of its SDN software. Version 5.0 of its Netvisor ONE OS supports distributed cloud edge compute sites and features greater scalability and improved automation, the company said.

VMware this week released NSX-T Data Center 2.4 and the latest version of NSX Cloud, which extends the capabilities of NSX to public clouds. Both are based on the same underlying technology.

In a hybrid cloud scenario, NSX-T Data Center and NSX Cloud work together and are managed through a single management console and a common API, providing enterprises consistent networking and security for applications running anywhere – on premises and in public clouds, a VMware spokesman said.

NSX-T Data Center is targeted at medium to large enterprises that have their own data centers but also have software developers that use public cloud and otherwise have significant presence in the public cloud, McCafferty said.

A new user interface allows users to provision networks themselves without having to wait for network engineers to do the configuration. That speeds the deployment of applications from days or weeks to minutes, McCafferty said.

“We are putting a layer on top for simplification. We are providing templates for simple installation and doing prescriptive guidance. We can predictively say, you probably want to do one of these three things. So, we can walk people through the installation and configuration. That was something that held SDN back, so it’s big progress.”

A network engineer who has access to advanced configuration and troubleshooting tools can still oversee the process on the backend, he said.

Furthermore, instead of waiting for network engineers to write policies using command lines, software developers in an enterprise can automatically deploy network and security policies by using human-readable commands using JSON. These simple, user-defined terms can then be re-used and applied consistently throughout the organization, the company said.

As for scalability, NSX-T adds support for IPv6 and can support tens of thousands of unique networks per NSX-T instance. The previous version of the software supported only thousands of networks, McCafferty said.

Casemore said increased scalability is an important feature in multi-cloud environments. “When you look at enterprises, they are looking at getting these software-driven goodies in terms of automation, operational simplicity and greater overall agility, but they don’t want to compromise on scale,” he said.