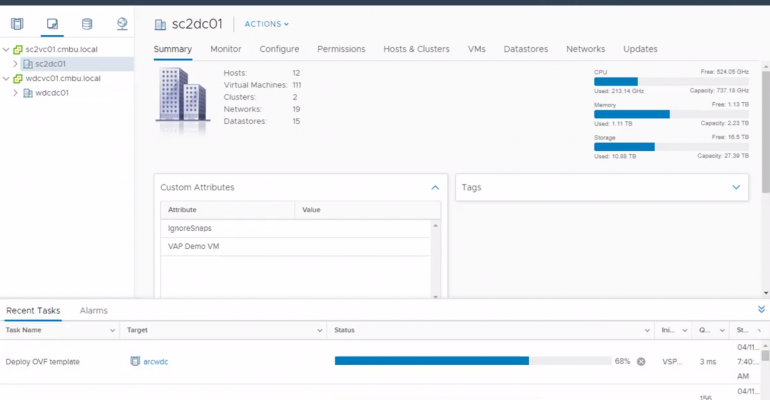 The biggest change is that it’s now sold as SaaS, but there’s a lot more in vROps 8.1.

VMware has moved vRealize, its suite of IT infrastructure operations tools, to the cloud.

The company announced this week availability of vRealize Operations version 8.1, sold through a SaaS (Software-as-a-Service) model. vROps is now a cloud-based overseer of workload performance.

Users with some infrastructure assets on Amazon Web Services will be able to integrate metrics served from AWS APIs with those from on-premises workloads, Gandhi told us.

With vROps 8.1, VMware aims to make its cloud-based operations center just as functional as it would be on-premises — a feature that in two short months has progressed from a nice convenience into a necessity, with companies relying on remote workers more than ever before during the Covid-19 pandemic.

“Everything that you can do around continuous performance optimization, workload balancing and optimization, as well as capacity and cost management, reclamation, show-back — all of those capabilities are available on both on-premises and SaaS,” said Gandhi.

Reclamation refers to a feature of capacity planning where underutilized and orphaned resources, especially storage (byproducts of relocating workloads and changing VM priorities) may be reclaimed and put back to use with more active resources.

“Show-back” refers to the vROps tools and resources that can report cost savings from a resource reclamation strategy to operators on a department-by-department basis.

The Next Version of Seamlessness

VMware is touting operational consistency between vROps on-premises and vROps Cloud, including for cloud-native applications.

“When a customer goes to the Workload Platform, they can start on-boarding the new constructs that vSphere 7 with Kubernetes has instituted, like supervisor clusters, namespaces, and pods,” Gandhi said. “VROps is able to auto-discover them and bring them into its inventory.”

In other words, the new vROps recognizes these new classes of workload in their new native context. But they’re located in a vCenter just like any other workload class, applying predictive analytics to determine capacity consumption and time remaining (an estimate of how long before resources attributed to a workload are consumed. This capability is “the bread-and-butter of what vROps does for capacity management,” she explained.

With vROps 8.1 installed, Kubernetes clusters appear in context on the expanded layout of vSphere’s Inventory Dashboard. They are auto-discovered, so there’s no need for a separate configuration file or manifest to formally declare their existence. An operator can now drill down from the abstract level of the cluster down to the components of physical infrastructure. Here, an operator can determine whether any operating issues or alerts have been discovered, and whether a cluster is performing according to established KPIs.

This does not mean vROps can be thought of as a container monitoring platform, Gandhi warned us. vROps is not an alternative to Prometheus, which provides metrics from deep inside containers. Rather, she advised, vROps’s metrics should be interpreted as relative measurements of workload performance as applications from a server-side perspective (as opposed to a client-side performance monitor, such as New Relic). “It is making sure the infrastructure that is supporting my container environment is healthy, up and running. But it’s not actually monitoring the guest container or the guest cluster itself.”

“The beauty of what vROps does is if the customer is running both virtual machines and Kubernetes workloads in the same vCenter deployment, it’s able to get that full inventory and provide that holistic view across the board,” she said.

Any tool that has visibility into an enterprise’s VM deployment platform must also have an agent residing on that platform. In vROps Cloud’s case, Gandhi explained, its operator installs a kind of reverse proxy agent. A secure connection is then established between this proxy and VMware vCenter, which feeds performance data to the cloud-based analytics engine.

Shouldn’t this connection introduce latency into the management process that wasn’t there before? Not significantly, she told us, since performance data is only being polled every five minutes.

The New Sense of Security

As enterprise data centers and colocation facilities adapt their shifts and reschedule workers amid the coronavirus pandemic, IT operations executives and managers appear to be flooding vendors such as VMware with requests for remote functionality. It just so happens that much of everyday management was already taking place at a distance. Now it needs to take place from home – with the same assurances as before.

“Employers across the globe are sending their employees who are typically working from office locations to the home,” noted Sanjay Uppal, senior VP and general manager of VMware’s VeloCloud business unit, during a press briefing last week. “And this is really driving demand through the roof.”

It’s a statement that brings home just how soon IT departments came to the realization that much of their expertise can be use just as effectively off-site as on.