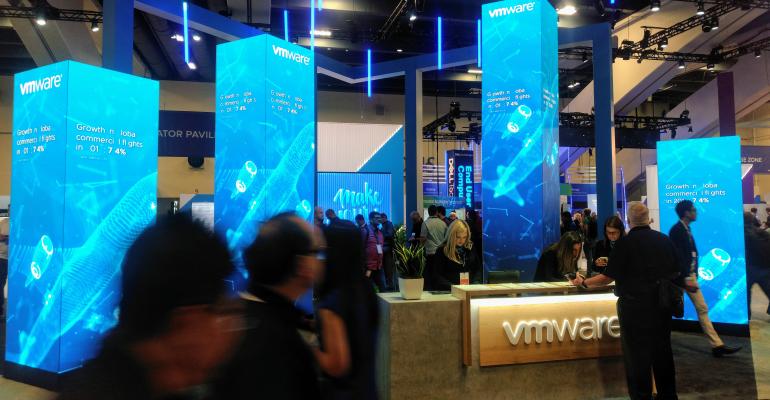 VMware has regrouped its multitude of public cloud-oriented application management services, pinching them down to two: Tanzu, for containerized apps deployment; and VMware Cloud Foundation, for extending network infrastructure into the public cloud.

What’s more, the VMware Cloud brand is being given new life: not as a public cloud-based extension to private platforms like it was before, but rather as a multi-cloud deployment and management gateway. It looks like a VMware-branded cloud, but it will act as a unified Cloud Console (below), providing equal visibility for distributed IT assets.

The company announced the changes Wednesday. 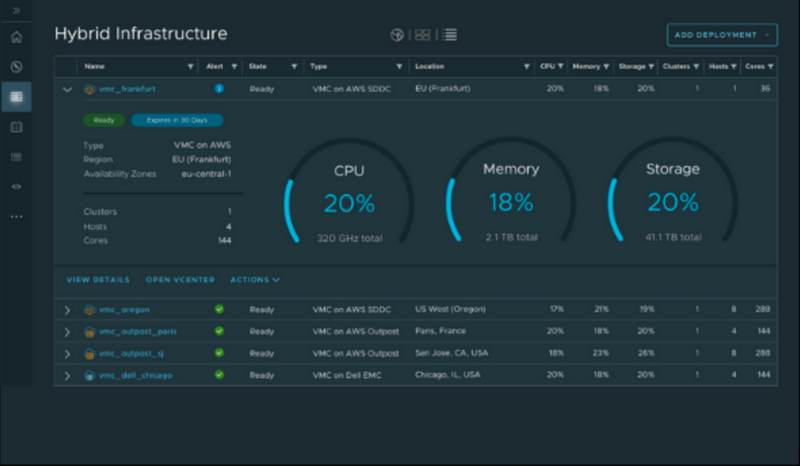 “What this provides our customers is really end-to-end visibility and control of their entire VMware cloud infrastructure estate across on-prem cloud and edge,” Mark Lohmeyer, VMware senior VP and general manager, explained during a press conference. Customer organizations that subscribe to VMware Cloud on AWS, on-premises, and/or through Dell EMC will be able to provision new services and manage resource consumption through this single console. Support for other cloud platforms (presumably Microsoft Azure and Google Cloud) are said to be forthcoming.

“Our multicloud strategy is a portfolio of modular cloud services that run our VMware Cloud Foundation infrastructure on any cloud as well as on the native public cloud infrastructure — whether it’s Azure, AWS, Google, etc.,” Raghu Raghuram, VMware’s COO for cloud products and services, said. “This foundation enables customers to run their traditional VM-based applications as well as modern, Kubernetes-based, container-based applications, in a consistent way, wherever they want.”

In an effort to converge VMware Cloud’s licensees and subscribers into a unified group, the company is launching what it’s calling the Cloud Universal subscription option. For customers who had already purchased long-term licensing options for on-premises cloud infrastructure, dating back to vSphere 4, VMware is now offering a way to convert their remaining time to Cloud Universal credits. This way, a VMware spokesperson confirmed to DCK, customers who have felt restricted to their on-premises environments can finally try broadly distributed computing without having to wait for their licenses to expire first.

Subscribers of on-prem VMware Cloud Foundation can convert the remaining value of their subscriptions to the new environment whenever they want to migrate those workloads to VMware Cloud on AWS or on Dell EMC, Lohmeyer said. “This gives them tremendous investment protection.”

VMware Cloud may not be as universal as VMware would like, at least not right out of the gate. Deployment options for AWS are available now. And Dell EMC’s fully managed on-premises service, offered in conjunction with VxRail hyperconverged servers, will also be open to VMware Cloud’s deployment portal. Nevertheless, VMware’s executives were eager to paint this newly converged portal as “everybody’s cloud,” or, as Raghuram put it, “one holistic environment where IT can control the costs.”

VMware’s goal is evidently to step out in front of cloud vendors’ multicloud options such as Google’s Anthos and AWS’ EKS Anywhere, to be the principal brand in a multi-branded universe.

But does this make VMware the customer’s single point of contact? In other words, who really “owns” this service, when VMware provides the gateway, but cloud providers like AWS own the infrastructure. If the cloud provider owns it, doesn’t VMware run the risk of losing the customer to the provider, especially if the provider has its own multicloud portal?

Raghuram didn’t appear to have a clear answer. If a customer can migrate its services from on-premises faster, and after doing so reduce its total cost of ownership, “why would you do anything different?” he asked. “That’s really the answer there. We’re faster, cheaper, better than any other mechanism.”

What happens when the cloud provider innovates its own services and infrastructure? Does it have to collaborate with VMware to make certain VMware Cloud follows the ball?

“We were very conscious right from the get-go to design it such that it would not get in the way, and in fact enhance our customers’ ability to use the innovations that are produced by the cloud providers,” Raghuram responded. “What we are providing is a platform that builds upon what they are doing as opposed to hiding what they’re doing.”

All that the Cloud Foundation stack requires, the COO continued, are the cloud provider’s core infrastructure building blocks. VMware’s own stack can support Kubernetes-based and VM-based applications on that fundamental layer. “These applications can connect into the cloud services as though they were living on the native environment,” he told us.

The new console will leverage Tanzu’s existing ability to connect to providers’ APIs, discover their services, and, in software developers’ terms, “consume” them, Raghuram said. “The net result is, if you’re a developer building on Tanzu and living on the cloud, you can get your job done faster than any other mechanism, as opposed to if you’re going to do it yourself on the native service. That’s a core attribute of what we’ve done, and that’s what makes this unique.”

VMware will also begin offering what it calls App Navigator, which it describes as a targeted service that helps customers assess and prioritize those applications they may need to “modernize” by rearchitecting them around containerization.

App Navigator and Cloud Console are publicly available starting today, as are Cloud Universal subscription options. AWS customers will be offered license convertibility options sometime before the end of April and Dell EMC managed cloud customers before the end of July.