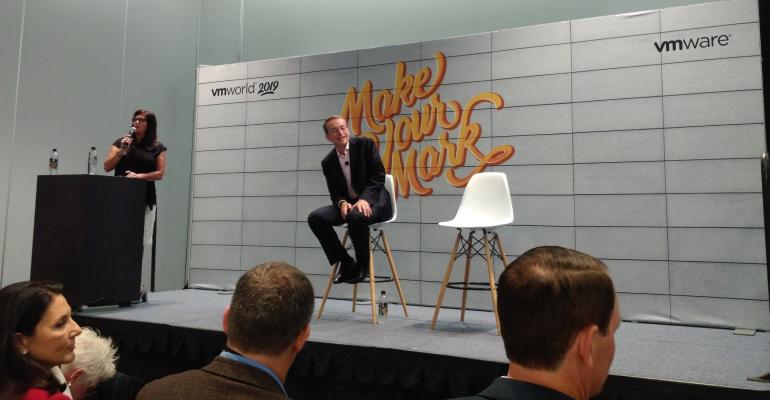 The company is rearchitecting vSphere into a Kubernetes-native platform, “a smooth onramp into the future.”

In case you were wondering how seriously VMware takes Kubernetes, the answer is seriously enough to rearchitect vSphere, the server virtualization platform that forever changed the world of enterprise computing and made VMware the force that it has been in the industry over the last ten years or so.

“This is maybe the most significant rearchitecting of vSphere and vCenter certainly in the last decade,” VMware CEO Pat Gelsinger said in a press conference during the event Monday. “How do we not just run a container on top of a VM, but how do we deeply integrate the Kubernetes constructs into VMware?”

Additionally, vSphere itself will be rebuilt on Kubernetes, he said. The effort to make vSphere a Kubernetes-native platform is called Project Pacific.

The mainstream arrival of Linux containers, often seen as an alternative to traditional hypervisor-based server virtualization, opened doors for many companies, old and new, to challenge VMware’s dominance in the data center market. Build an enterprise-hardened platform that will give companies an easy way to deploy and run containers on bare-metal infrastructure, and they will have no need for VMs.

Kubernetes provides a lot of the plumbing necessary to achieve that, and unlike VMware it’s open source. But Kubernetes is also complex, and most enterprises don’t have in-house experts to deploy it on their own. They want to modernize their existing applications, develop new modern ones, and run them on modern, cloud-native infrastructure.

By fusing vSphere and Kubernetes, VMware is pitching them a smooth transition from the current state to the state they’re aiming for while using the same familiar VMware infrastructure management tools. It will be “a smooth onramp into the future,” Gelsinger said. Besides, he added, you’d be hard-pressed to find a company running containers on bare metal anyway.

“How many enterprise deployments of containers are done on bare metal versus virtual machines? And the answer is, they’re all running on virtual machines,” he said. “That’s how Google runs ’em, and Amazon runs ‘em.”

One versus the other is “just a wrong way to think about it,” he added, since Kubernetes and VMware complement each other, the former dealing with operations and applications, while the latter deals with infrastructure issues, such as resource management, security, and optimization.

If you’re using PKS, the enterprise Kubernetes solution developed by Pivotal, the company VMware is in the process of acquiring, you’re already on the path toward using the upcoming Kubernetes-native version of vSphere, the company said.

VMware announced on Monday a tech preview of the first product based on its new Kubernetes strategy, Tanzu Mission Control, describing it as a “single point of control” for all Kubernetes clusters a user has, regardless of whether they’re running on vSphere, in the cloud, on a managed services provider’s infrastructure, or on top of Kubernetes.

VMware executives did not say when they expected to start shipping these products.

“We haven’t specifically talked about when we’re going to release Project Pacific,” said Rajiv Ramaswami, VMware’s COO for product and cloud services. “But expect it. It’s coming soon. We wouldn’t be talking about it otherwise.”