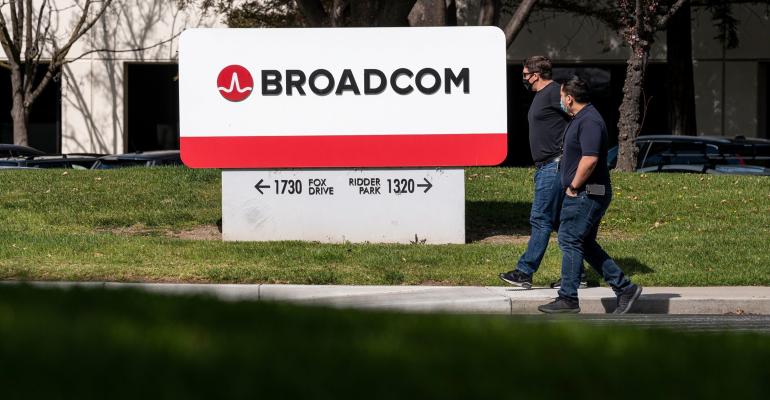 Revenue in the fiscal first quarter will be about $8.9 billion, Broadcom said in a statement Thursday, compared with an average analyst estimate of $8.8 billion. The company declined to give full-year guidance for fiscal 2023, citing economic conditions.

The shares rose as much as 3.6% to $550 in late trading after the earnings report was released. Though the stock was down 20% in 2022 through the close, that’s significantly better than the performance of most chip peers this year.

The forecast continues a run of Broadcom outperforming the broader chip industry. Chief Executive Officer Hock Tan’s choice of end markets — such as making key components for Apple Inc.’s iPhone and the chips used in Amazon.com Inc. data centers — has helped insulated the company from a sharp slowdown elsewhere.

Broadcom, based in San Jose, California, also has branched out into enterprise software by acquiring security and mainframe capabilities. And it’s trying to extend that diversification with a $61 billion purchase of VMware Inc. in a transaction announced in May. During Broadcom’s earnings call, Tan said that the company is making progress with regulators and still expects the merger to close in fiscal 2023.

Broadcom’s report was more positive than that of rival Marvell Technology Inc., which raised concerns about slowing demand from data center owners and a weak Chinese market.

During Broadcom’s call, the company said it expects the wireless unit, which has Apple as the top customer, to grow by a low-single-digit percentage in the first quarter.

Tan has predicted that the chip market overall will decelerate to historical growth rates of about 5% or less. That’s well below more than 20% that the company achieved in 2021 and 2022, but in line with what analysts are predicting for Broadcom for 2023.

Tan said that the server storage unit would see revenue grow by more than 50%, but that the company is seeing a slowdown in its industrial segment. He added that softness will be mostly apparent in China, where product consumption has ebbed. He added, though, that it’s unclear if the Covid lockdowns in the region will have an impact beyond the first quarter.