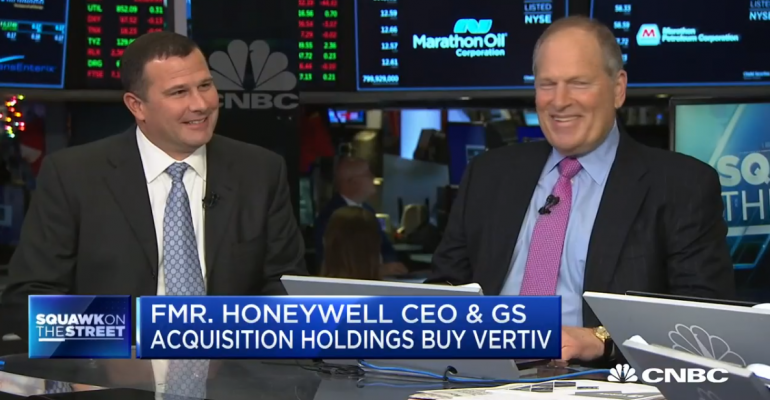 After four years of being privately held, the former Emerson Network Power business is once again trading on NYSE.

Public market investors can once again add Vertiv, one of the world's largest data center infrastructure equipment and services vendors, to their portfolios.

Its return to the stock market is a culmination of a process that started with Platinum selling a portion of its Vertiv stake to GS Acquisition Holdings, a holding company created by an unnamed Goldman Sachs affiliate and David Cote, former CEO and executive chairman of Honeywell. With the Platinum deal closed, GS Acquisition has changed its name to Vertiv Holdings.

Vertiv’s current management team is remaining in place, including Rob Johnson, its CEO since 2016. Cote, who is credited with spearheading a successful turnaround at formerly struggling Honeywell, is on board as Vertiv's executive chairman.

"Today marks an important milestone in Vertiv’s history, as we enter the public markets well positioned to create shareholder value and capture the growth opportunities we see on the horizon,” Johnson said in a statement. "Together we have positioned Vertiv for its next chapter, and I couldn’t ask for a better team to be with on this journey."

According to a filing with the Securities and Exchange Commission, the cash-and-stock merger was funded by $705 million that had been put in a trust fund after GS Acquisition's 2018 IPO, as well as $1.2 billion raised from global investors. The money was used to retire $1.5 billion of Vertiv's debt, with another $342 million going to Platinum and existing shareholders. Going into Monday's stock-market opening, Platinum had a 38 percent stake in Vertiv's common stock, the global investors 37 percent, and GS Acquisition the remaining 25 percent.

In recent years, Vertiv, known for being one of the largest vendors of data center power and cooling equipment, has been expanding in critical-infrastructure services and data center management software.

When the sale to GS was announced in December, Vertiv's VP and general manager Patrick Quirk told Data Center Knowledge that most of the company's revenue came from traditional enterprise customers, but that in 2019 it had seen a pick-up in sales to hyperscale data center operators like Facebook, Google, and Microsoft as it gained the ability to provide full data center solutions rather than individual products.

Steve Lalla, Vertiv's executive VP for services, told us at the time that by going public and shrinking its debt load would allow the company to make acquisitions to bolster its portfolio, most likely in the areas of edge data centers and software. He said the company would look at "places in our portfolio where we think we can do more [via acquisitions] versus doing it ourselves."

In a statement issued this week, Cote said, "Vertiv has a great position in a good industry with an excellent management team and solid strategy in place to continue building their leadership position in the market. As we've met with potential investors over the past few months and shared our story, it's clear there is an appetite in the market for a company like Vertiv that demonstrates superb leadership and growth capabilities on a global scale."