Edge data center startup Vapor IO has raised a Series C funding round led by the private equity firm Berkshire Partners • The startup has bought out the assets for an edge colocation business it’s been building together with partner and investor Crown Castle • Crown, the wireless-tower giant, will remain a Vapor partner • The startup has an ambitious goal to deploy more than 100 edge data center sites around the US by 2020

Vapor IO has raised a Series C funding round, the edge computing infrastructure startup announced Wednesday. Choosing not to go the typical venture-capital route followed by most startups trying to scale, Vapor sourced its latest round through private equity, bringing onboard Boston-based Berkshire Partners (not to be confused with Berkshire Hathaway), which led the round.

Austin-based Vapor did not disclose the size of the round, but Cole Crawford, its founder and CEO, said the private equity firm’s investments typically range between $50 million and $500 million, suggesting that its investment in Vapor was $50 million or more.

“This gives us the capital to go out and actually put money to work for our own technology, the intellectual property we’ve developed,” Crawford said in an interview with Data Center Knowledge. “We’re now an edge colocation company.”

Vapor announced that it would provide data center colocation services at sites connected to wireless towers – or edge sites – last year. It made the announcement together with Crown Castle, the American wireless tower giant that’s also an investor in Vapor.

Under the previous arrangement, Crown would provide the colocation services to clients using Vapor’s technology, with the startup acting essentially as a managed-service provider, Crawford explained. That arrangement has now changed, with Vapor buying out the assets built as part of the project (codenamed “Volutus”) and itself becoming the provider.

They saw overtime, however, that the customers would be more comfortable dealing with Vapor directly, he said. “They wanted one hand to hold.”

Vapor’s goals for its nascent colocation business are ambitious. The company is planning to build a nationwide platform consisting of multiple edge data center sites in each major metropolitan area in the US.

Together with Crown it has already built two sites in Chicago, with two more under development, Crawford said. The company expects to eventually build a total of five sites in Chicago. Next year, it is planning to deploy in 13 more locations across multiple cities, he said, expecting to reach more than 100 locations by 2020.

The model for each metro will be to build several locations and interconnect them in a way that creates a virtual data center spanning the entire metro, minimizing the latency on network connections between its clients’ servers and their end users. 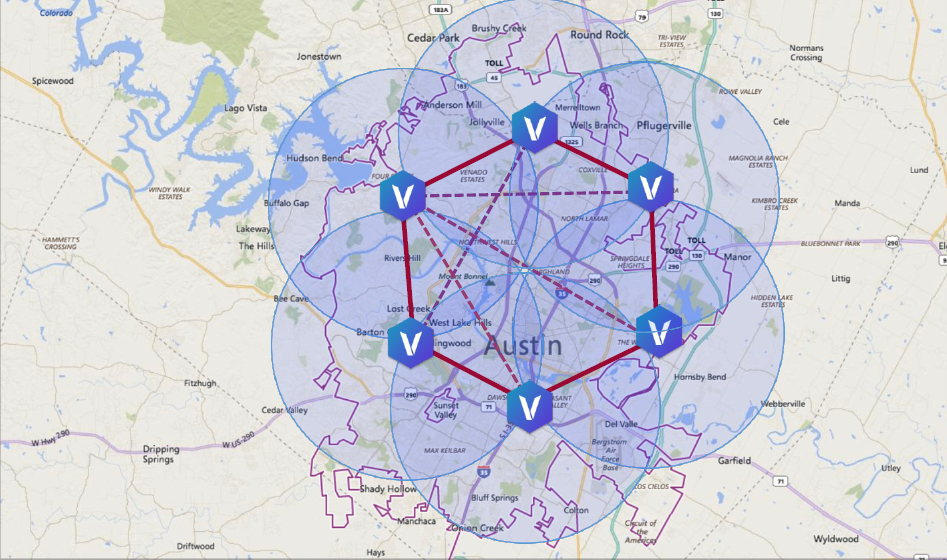 Like Equinix or Digital Realty Trust do in much larger facilities around the world, Vapor plans to sell colocation space at its edge sites, which will also serve as venues for network interconnection, or peering.

The services are targeted primarily at telecommunications companies, big digital content players, Internet of Things companies, autonomous-vehicle operators, and anyone else looking to reduce network latency and bandwidth costs by placing their computing infrastructure closer to end users.

This ambitious plan requires a lot of investment, which is why Vapor went the private-equity route for its latest funding round, Crawford said. “We knew that there was going to [have to] be more capital deployed. We needed to establish a relationship with financial partners that could grow with us.”

He declined to disclose the size of the stake in Vapor Berkshire now owns, but said Vapor is still in control. (“The company still owns itself.”) He also declined to say how much revenue the company was generating or whether it was profitable.

The startup’s current focus is not on the bottom line, the founder and CEO said. “Our focus is on technology enablement and customer enablement.”

Crown remains an investor in Vapor, and the two will continue working as partners. Vapor will continue using Crown’s sprawling tower real estate and fiber assets to build its platform, but Crawford also expects to strike partnerships with other major tower companies.

This article previously said Vapor would be providing colocation services at wireless tower sites. While that will be true for some sites, the company is also planning to provide the services in locations that are connected to wireless towers but aren't placed directly at the tower sites.
TAGS: Edge Computing Startups Deals Voice Update
0 comments
Hide comments
Recommended Reading