From bare metal cloud to network fabric, partners will serve whatever needs edge computing users have on Vapor sites.

The Austin-based edge data center startup Vapor IO is getting it's ducks in a row as it gets ready for a rapid roll out of its Kinetic Edge data centers after a couple of years of trials and planning. This week the company announced the formation of the Kinetic Edge Alliance, an assortment of edge computing-focused partners that will support Vapor's data centers with the infrastructure, tools, and expertise needed for successful edge deployments.

Vapor specializes in placing compact modular data centers physically close to cell tower locations to house edge computing infrastructure. For easy installation, the patented units are small but dense, with each able to support up to 150kW of gear inside a cylindrical enclosure that's nine feet in diameter. As a hedge against downtime, they're designed to be positioned around a city's core in such a way that each cell tower in the region can connect with at least two of the data centers.

The company has had two of these close-to-the-tower locations operational in Chicago for several months now, with a third going online within the next six weeks, and a forth by mid-year.

Its plans are nothing if not ambitious. By the end of the year, Vapor says, it will expand into five additional markets -- Pittsburgh, Atlanta, Dallas, Los Angeles, and Seattle -- with three edge data centers in each market. Within 18 months, the company plans to have edge computing sites placed in each of the top 30 US metro markets, which will give it access to nearly 50 percent of the US population. 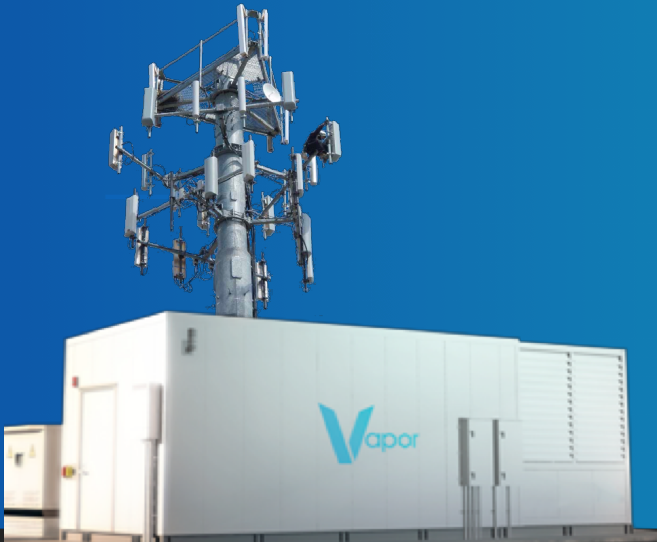 "We think this grows at an order of magnitude every 24 months," Cole Crawford, Vapor IO founder and CEO, told Data Center Knowledge. "We started with two, we're going well north of 20 or 30, and by 2021 or 2022, we should be in the hundreds of locations just in the United States."

The Kinetic Edge Alliance, which will join Vapor in its rush to the edge, fills in the gaps so that the Kinetic Edge as a brand has more to offer than cramped edge colocation space connected to cell towers. Including Vapor, the organization starts life composed of 12 partner companies that are divided into two groups -- deployment and technology.

The deployment partners appear to be the backbone of the alliance and will have technicians onsite at each Kinetic Edge location being deployed to turn these mini-data centers into full-service operations.

In other words, when the online switch is flicked for the first time at each location, Federated Wireless, one of the partners, will already be delivering 4G and 5G wireless services, Linode will offer instant access to its cloud infrastructure, and Packet will have servers installed and at the ready for providing bare metal cloud and edge computing infrastructure.

While Packet's involvement will undoubtedly be good for Packet (because it'll help expand its bare metal cloud), it might be a crucial element in the eventual success or failure of Vapor's Kinetic Edge.

Because edge computing specifically takes advantage of physical geographic locations, many edge use cases require users to maintain edge presences in hundreds of locations, an expensive proposition if done by renting colocation space and then provisioning and maintaining servers out-of-pocket. While Vapor is happy to rent rack space and let customers take the DIY approach, CAPEX may not be the best way to go at the edge.

Want to learn more about what Vapor IO and other early movers in edge computing are up to? Most importantly, are you wondering whether enterprise IT/data center leaders should even care about any of this? We at DCK think they should, but don’t take our word for it. At Data Center World Global in March, Vapor IO founder and CEO Cole Crawford, Packet CTO Ihab Tarazi, and StackPath founder and CEO Lance Crosby (founder of SoftLayer, sold to IBM for $2 billion) will join us for a panel to take a deep dive into the earliest deployments of edge computing infrastructure and to talk about what it all means for the future of enterprise technology. Register here

"They can use our servers and pay by the hour," Tarazi said, adding that Packet can take care of the tedious deployment details, creating something of a turnkey operation for edge computing power. This also includes accommodating customers that need special hardware, such as Nvidia GPUs or processor configurations that lie outside of plain-vanilla Intel configurations, including AMD and Arm silicon.

While the deployment partners supply an integral part of Vapor's edge data center infrastructure, the technology partners seem to have a role more in line with traditional tech partnerships.

"Technology partners might be deployment partners at some level," Crawford said, "but they are companies that we or one of our deployment partners are working with to create software solutions and API integrations for an easier, faster, better experience on the edge cloud consumption side of the equation."

Seagate, for example, can work either directly with a customer or through one of the deployment partners to meet specific storage needs, while Pluribus Networks can enable a customer to span multiple edge sites through the use of its network fabric for distributed cloud.

The list of technology partners is loosely focused on mobile and the Internet of Things. Hitachi Vantara is a wholly-owned Hitachi subsidiary which brings IoT expertise into play; Detecon International is a subsidiary of Deutsche Telekom with technology to help with the transition to 5G; and Alef Mobitech offers technology for deploying multi-access edge computing. The only outlier is New Continuum, which mainly offers a cross-connect to its West Chicago data center.

Crawford said that as the number of connected devices requiring instant feedback from their networks continues to grow, edge computing becomes more and more necessary.

"We're not going to solve this through through compression or algorithms," he said. "In physics, the speed of light remains constant, so if we're going to get to a sub-four millisecond decision being made for any autonomous robot, we're going to have to be within close proximity, given there's a constant speed of light that is in play."