Vantage Data Centers, in a company first, is expanding beyond North America. The company said it was planning to invest $2 billion across five markets in Europe, including a "crown jewel" 55MW greenfield campus under construction in Offenbach, Germany, just outside of Frankfurt.

The developer got the site through acquisition of the Luxembourg-based data center provider Etix Everywhere, a deal it disclosed as part of its European expansion announcement Monday. The former Etix site is strategically located within a kilometer of the 60MW Interxion campus (15 interconnected data centers), where DE-CIX, one of the world’s largest internet exchanges, has been located since 1998.

Vantage acquired Etix to expedite wholesale data center capacity delivery for hyperscale and enterprise customers looking to expand in Frankfurt. Terms of the deal were not disclosed. The build in Offenbach was originally announced in August 2018, as a joint venture between Etix, the local utility EVO, and Data Center Group, a data center design, build, and management firm.

Power availability in the greater Frankfurt metro was constrained, and the Etix acquisition was a way to solve that problem, Sureel Choksi, Vantage president and CEO, told DCK in an interview.

In addition to the acquisition of Etix, Vantage announced a plan to build four greenfield hyperscale data center campuses in Europe. Already underway, they are in: 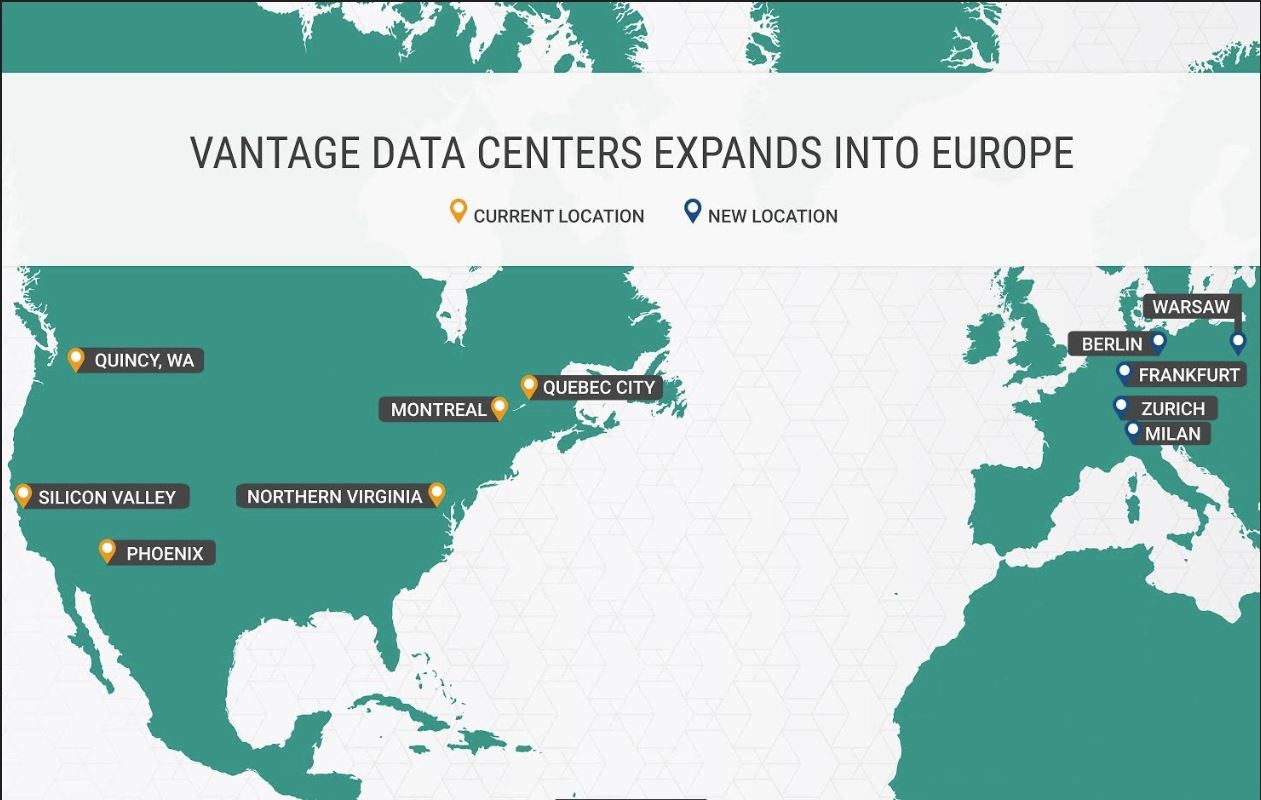 In January 2018, Vantage announced a purchase of a 50-acre site in Goodyear, Arizona (outside of Phoenix), but has yet to break ground there. The company said it was planning a 1 million-square foot, 160MW data center campus in Goodyear. It has been doing the pre-development work at the site to be able to quickly deliver a powered shell and initial data hall as soon as it signs an anchor tenant, Choksi said.

Choksi told us 2019 bookings in Northern Virginia were in the range of 80MW to 100MW.

At a recent investor conference, Marc Ganzi, CEO of both Digital Colony and Digital Bridge, highlighted Vantage’s strong US leasing performance compared with its much larger publicly traded peers.

Ganzi has been selected to replace Colony Capital’s current CEO, Tom Barrack, when he steps down next year, to lead the REIT’s pivot from a traditional real estate investor to one that’s focused on digital infrastructure, such as data centers, wireless towers, and fiber optic networks. 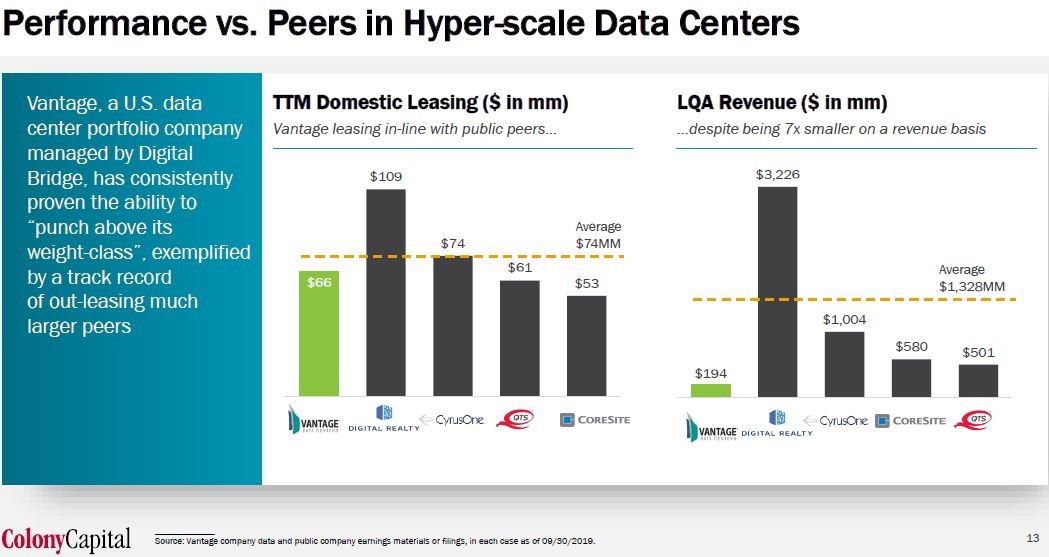 It appointed Michael Foust, co-founder and former CEO of Digital Realty Trust, one of the world’s two largest data center developers and operators, to chair the boards of both DataBank and Vantage.

In May last year, Digital Colony partnered with EQT Infrastructure to acquire the backbone network operator and data center colocation provider Zayo Group Holdings in an $8 billion deal expected to close by the second quarter of this year.

There is no shortage of major data center operators looking to expand in Frankfurt, including Equinix, CyrusOne, and Digital Realty, which last year announced a deal to acquire Interxion (the deal has yet to close).

“Vantage’s expansion into Europe is the company’s next step in becoming a premier, global hyperscale data center provider,” Ganzi said in a statement. “We are excited to support their team, their customers, and their growth plan, and fueling Vantage Europe’s rapid build-out.”

Vantage’s Etix includes several small data centers and high-performance computing sites located in secondary markets around Europe. Choksi said that these facilities would continue to operate under the Etix brand, as they are not a good fit for the Vantage wholesale and hyperscale data center strategy.

Etix, whose specialization has been building colocation facilities in underserved secondary and tertiary markets, has also built data centers in Africa and Latin America. It’s also claimed to have developed its own technology for remote data center monitoring and management.

It’s unclear what Vantage’s plans are for the Etix IP or its African and Latin American data centers. At this point, the wholesale data center provider doesn’t appear to have much interest in those assets, so it may eventually sell them.