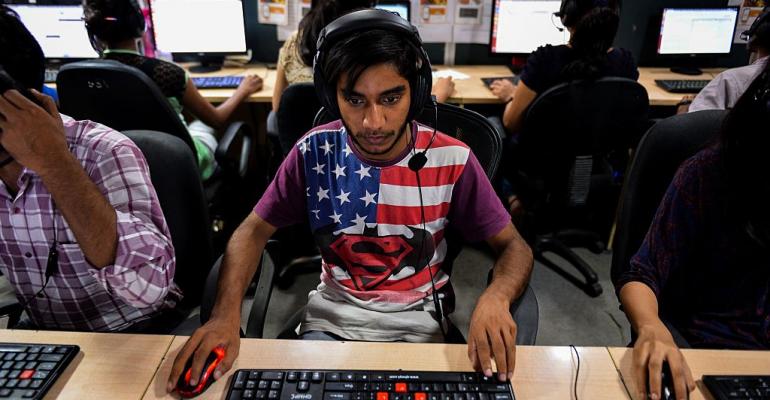 CHANDAN KHANNA/AFP via Getty Images
An Indian man works at a call center of TravelKhana in Noida.
Manage>Uptime

Global giants, including big banks, are calling on Indian states to classify outsourcing as "essential services" so staff can continue working from offices.

Saritha Rai and Anto Antony (Bloomberg) -- Companies in India are scrambling to ensure that the millions who staff the back offices of Wall Street banks and take on work outsourced by firms from airlines to insurers can keep going as the nation mandates increased work from home amid a spike in coronavirus cases.

UBS Group AG, Deutsche Bank AG and other global giants are working with industry trade group Nasscom to ensure Indian states classify such work as essential services so staff can continue to work from offices if required.

Infosys Ltd., Tata Consultancy Services Ltd. and other Indian firms that employ more than four million people in tech hubs such as Bengaluru, are also requesting that their clients relax non-disclosure and other privacy rules so that employees who must stay at home during the lockdown can still do their jobs.

“Moving millions of desktops to employees’ homes, configuring software to allow for slower bandwidth and ensuring cybersecurity - it’s a mind-boggling physical and logistical exercise that our companies are in the midst of right now,” Keshav Murugesh, chairman of Nasscom, said in a phone interview.

The move by Prime Minister Narendra Modi to impose a lockdown Sunday across most of India poses a significant challenge for banks such as JPMorgan Chase & Co. as well as India’s $181 billion outsourcing industry that handles everything from trade settlements to airline reservations for British Airways and insurance claims.

Nasscom is asking state governments to grant special exemptions for their industry to ensure some workers can go to the office, where they have access to essential databases and reliable high-speed internet -- which most workers lack at home. While many states, including Karnataka, where Bengaluru is based, and Mumbai’s state of Maharashtra have already granted data centers “special status,” it’s not across the board.

“Employee safety is paramount but we are also focused on keeping operations running without stoppages,” Murugesh said.

Privacy is also an issue, with the prospect of millions of workers processing sensitive data from home. Outsourced work from the world’s largest banks, insurers, airlines and retailers are governed by strict non-disclosure agreements. Many companies don’t allow employees to even carry their phones in the workplace for fear of compromising clients’ confidentiality clauses, and restrict access to certain areas to only those working on the project.

India’s data centers are vital for many global finance firms. Barclays Plc has more than 20,000 staff in India’s back offices, tending to all tech solutions globally. Deutsche Bank employs 10,000, while JPMorgan has about three times that many. Barclays has “significantly reduced” the number of staff working from its Indian offices, while most Deutsche Bank staff are also working from home, according to bank statements.

UBS says about 90% of its 6,000 employees in India are working from home. The Swiss bank has drawn up a list of 600 essential staff who can go to the office and will be offered meals, and transport in cars regularly cleaned with sanitizer, according to people familiar with the bank’s plans.

Mumbai-based Tata Consultancy, or TCS, has ordered 85% of its global staff to work from home, including the vast majority of its Indian employees, people familiar said.

“As part of the business continuity in this critical situation, we have enabled work from home for large number of TCS associates,” the company said in a statement, adding its teams are on “war footing,” to ensure smooth operations.

Bengaluru-based Infosys didn’t immediately respond to questions on the prevailing situation with clients and employees. Wipro Ltd. said its customers have been “supportive” of approving work from home arrangements.

The coronavirus contagion that has arrived in India’s big cities like Mumbai, Bengaluru and New Delhi is prompting a complete rethink on how work is executed, as experts warn that the densely-populated country of 1.3 billion people with limited health-care infrastructure could soon be hit by an avalanche of cases.

The recent spike prompted the Modi government to recommend sweeping lockdowns and transportation curbs. All passenger and commuter trains were suspended until at least March 31. By Monday, the country had reported 415 cases, including seven deaths. Many states began implementing curfew-like restrictions -- barring more than five people from assembling in public.

“In the longer term, a completely new outsourcing model has to evolve,” Murugesh said.

India’s federal structure of governance has thrown up its own share of complications for companies. While the central government can advise regional governments to classify information technology and back office work as “essential services” allowing them to be exempt from lockdowns, only regional governments can amend the rules to allow such an exemption.

Outsourced work such as the back-end of stock markets, airline bookings and medical insurance claims that can’t afford a “split-second latency” will need to be carried out from offices that already have the necessary infrastructure. Confidentiality concerns around work such as drug development and regulatory needs will also require employees to work from offices.

“Both the central government and many state governments Karnataka and Maharashtra have been extremely helpful in declaring our industry as essential services,” said Nasscom’s Murugesh, who is also the group chief executive officer of WNS Global Services.

Most IT services and back office services companies based in India have already received the required approvals to work from home, said Sangeeta Gupta, senior vice president and chief strategy officer at Nasscom. “The remainder should be hearing from their clients in the next couple of days,” she said.