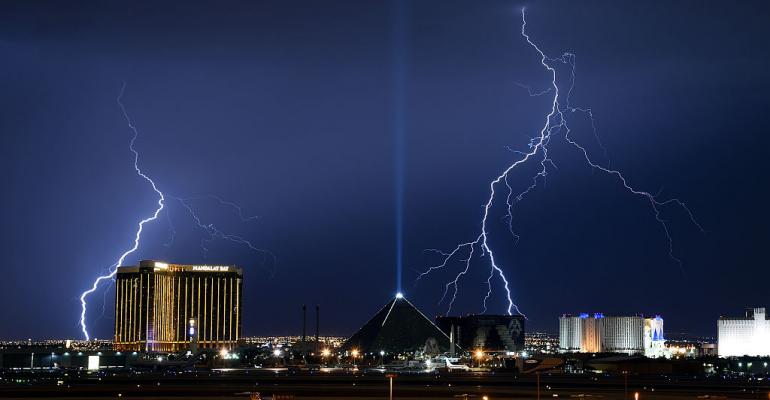 Natural disasters like hurricanes, floods, and wild fires are on the rise, all of them impacting the ability of data centers to stay online, but most organizations are not preparing their data centers for severe weather events.

That’s according to survey results The 451 Group’s Uptime Institute published earlier this year. This week, following release of a sobering UN climate change study and Hurricane Michael’s landfall on the Florida Panhandle, Uptime put out a report to remind data center operators of the growing impact it expects rising global temperatures will have on their professional lives.

Floods that inundated northern UK over the 2015 Christmas period, for example, brought down a Vodafone data center in Leeds. A lightning strike this year in San Antonio kicked a Microsoft Azure data center offline, causing one of the worst outages in the cloud provider’s history.

Water-supply shortages caused by drought could leave data center operators without the appropriate amount of water needed for their cooling systems, Uptime points out, while high risk of wild fire sometimes causes utilities to switch off power.

The recent survey by Uptime found that most data center operators either don’t expect to be impacted by climate change or simply ignore its potential impact. For example, 90 percent of organizations surveyed didn’t think they needed a plan to mitigate increased risk of flooding. About 70 percent weren’t preparing for severe weather events at all. Only 33 percent were re-evaluating their current data center infrastructure technologies, such as cooling systems, to improve reliability. Almost half were “ignoring the risk of climate change disruptions to their data centers,” Uptime said.

Just earlier this week, an international scientist panel put together by the United Nations published a report that predicts that society will likely suffer the worst consequences of climate change much sooner than previously thought. The atmosphere will warm up by 2.7 degrees Fahrenheit by 2040, if greenhouse gas emissions continue at their current rate, at which point we would see coral reefs die off en masse, while food shortages, and wildfires continue worsening, according to the panel scientists.

The Uptime paper also mentions the UK Climate Change Risk Assessment 2017 Evidence Report, which warns about the importance of assessing data centers and digital infrastructure to prepare for natural disasters in the coming years.

Uptime quotes Paul Barford, a University of Wisconsin-Madison professor and senior author of a recent study by UW-Madison and the University of Oregon, which predicts that rising sea levels could submerge critical communications infrastructure as soon as 15 years from now.

“Most of the damage that’s going to be done in the next 100 years will be done sooner than later,” Barford said. “That surprised us. The expectation was that we’d have 50 years to plan for it. We don’t have 50 years.”

The Uptime paper identifies three areas of focus for data center operators that want to be better prepared for extreme weather events: staffing, cooling, and fuel.

A survey of operators whose facilities were in the areas impacted by Superstorm Sandy in 2012 showed that nearly half of them thought having sufficient staff on-site or in hotels nearby was “critical to maintaining operations,” according to the institute.

Uptime is finding that many operators aren’t planning for increased heat and humidity when designing their data center cooling systems: “They are putting in cooling systems that may not be adequate to meet future needs.”

Additionally, many rely on cooling systems that need a lot of water. Those systems – for example evaporative adiabatic cooling – would be a problem if water becomes scarcer around the world, the report reads.

Keeping enough fuel on-site to keep backup generators running through a prolonged utility outage is not as simple as refueling the tanks when fuel level is low. For example, a facility’s basement in New York City was flooded after Superstorm Sandy. The basement happened to be where generator fuel for the data center in the building was kept.

In another Sandy example, a “bucket brigade” spent 48 hours carrying fuel up 18 stories in buckets to keep a data center online. “Thoughtful design of the fuel topology would have led to better operational sustainability,” according to Uptime.

Other factors, such as understanding fuel-supply provider agreements, also impact a facility’s ability to stay online during blackouts.