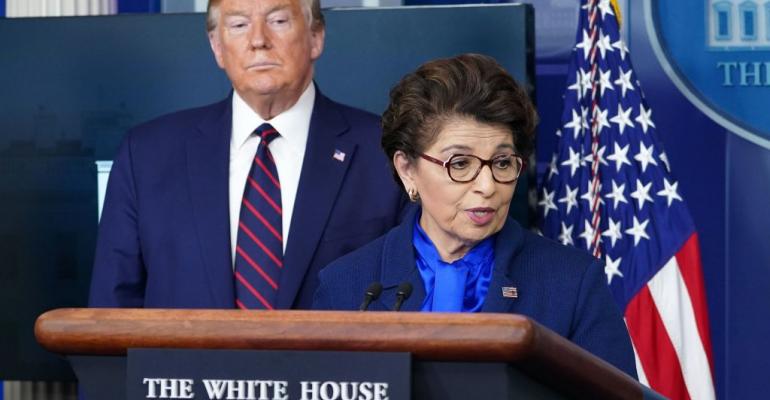 MANDEL NGAN/AFP via Getty Images
SBA Administrator Jovita Carranza speaks during the daily briefing on the novel coronavirus, COVID-19, at the White House on April 2, 2020.
Manage>Uptime

Banking representatives and an administration official said the E-Tran system used to process loans under the relief program was down for part of the day.

The system glitch is the latest hurdle in the rocky launch of the $349 billion Payroll Protection Program, which aims to issue loans meant to help small businesses as part of the $2 trillion stimulus package.

Related: Data Center Interconnection Platforms Pitch in to Help IT Scale During the Crisis

President Donald Trump acknowledged there were “minor glitches” in the SBA program during the daily White House coronavirus briefing on Monday, but added that the loan process is “very fast.”

“They were swamped. They were actually swamped,” he said.

The SBA had teed up about $43 billion in loans to disburse as of midday Monday, according to a person familiar with the matter.

Jim Engel, Chief Executive and president of Aquesta Bank in Cornelius, North Carolina, said he was notified about 1 p.m. New York time that E-Tran was down for a few hours. “The system is just inundated with users,” he said. A spokeswoman for Celtic Bank said the system was down in the morning and later was back up.

Houston-based Prosperity Bank said it couldn’t access the E-Tran platform Monday morning, and it finally came online after lunch, said vice president Cullen Zalman. The bank, which serves Texas and Oklahoma, also just today got some much-needed guidance on how to prepare loan documents, he said.

The president of the union representing SBA workers said he’s been hearing about “issues” with E-Tran since Friday.

The system is used by SBA-approved lenders to send applications to SBA to get a loan registered and receive a guarantee number. Non-SBA lenders use it to get registered to participate in the program.

“They can’t get into the system,” said Johnnie Green, national president of The American Federation of Government Employees Local 228, referring to lenders. According to Green, his union represents more than 1,000 SBA employees. Green said he was told by SBA employees that a fix was expected Monday, but he wasn’t sure whether the issue had been corrected.

Amazon Web Services, the largest provider of cloud computing services and a major seller of software to the federal government, was brought on last week as subcontractor by a company working to build a new software tool for banks participating in the SBA program, according to a person familiar with the matter. That project, designed to expedite lenders seeking to become registered to participate in the program, isn’t finished yet, the person said. A spokesman for AWS declined to comment.

Republican Senator Marco Rubio of Florida, chairman of the Senate Committee on Small Business and Entrepreneurship, said in a tweet Monday evening that the E-Tran system used by SBA lenders “remains a major problem” and that he’s asked SBA for its plan to improve access. “This MUST be corrected ASAP,” he said.

#PPP UPDATE 5/7: Access to the @SBAgov “E-Tran” system used by current SBA lenders remains a major problem. We have asked SBA for more information on who they are using & what their plan is for improving access to E-Tran. This MUST be corrected ASAP.

But the ability of lenders to connect with SBA on Monday -- both SBA-approved lenders trying to process loans and those trying to get registered to participate in the program -- seemed to be about the same as it was on Friday, said Paul Merski of the Independent Community Bankers of America.

The ICBA sent a letter to SBA and Treasury late Saturday night complaining about the technology and a “myriad of unanswered questions and lack of clear instruction on how to complete loans through the SBA.” The group made several recommendations, including enhancing SBA systems.

Merski said community lenders are still looking for guidance from SBA on how to complete some loans, including when a firm’s officers are also on a lender’s board or serve as a director.

The National Federation of Independent Business, the largest group representing small businesses in the country, is aware of loans being approved but doesn’t know of a member that has received cash yet from a loan, said Karen Harned, executive director of the NFIB Small Business Legal Center.

“I have no idea what to expect now on how long approvals are going to take and how long cash out the door is going take,” Harned said. “I just don’t know.”

Harned said another issue that continues to frustrate small businesses is some banks saying they won’t accept applications unless they already have a lending relationship with the borrower. That’s prompted backlash from Rubio and others over concerns that some firms could get shut out of the program, which was billed as helping all small businesses.

Rubio said in a statement on Saturday that, based on initial calculations, funding for the program could run out before June 30 and that Congress will need to appropriate more money. Both Trump and Treasury Secretary Steven Mnuchin have promised to ask Congress for more funding if needed.