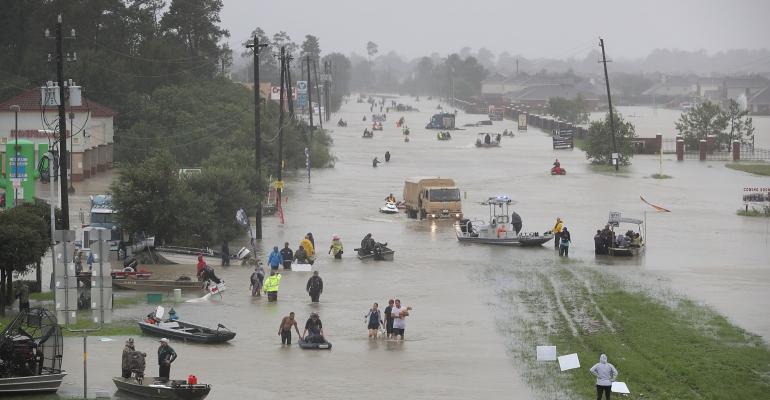 Joe Raedle/Getty Images
People walk down a flooded street as they evacuate their homes after the area was inundated with flooding from Hurricane Harvey on August 28, 2017 in Houston, Texas.
Manage>Uptime

Hurricane Harvey: Delivering Managed IT Services During a Catastrophe

It’s being called a 500-year storm and Houston, Texas-based Elevated Technologies finds itself smack in the middle of it.

As early as the middle of last week, the managed services provider (MSP) began reaching out to clients, preparing the organizations as much as humanly possible for the fury of Hurricane Harvey.

But despite the best-laid plans, the extent of damage to the state’s Gulf Coast still came as a shock.

“I don’t think anyone really anticipated the kind of flooding that Houston would be subject to,” he added. “The city is basically underwater.”

Task number one for the MSPs five-member team was ensuring customers’ data would survive.

“We started talking really on Wednesday when they projected where it would hit,” Rorie said. “First thing we did is make sure that all of our clients, all of their offsite backups were running successfully. We use Veeam and StorageCraft.”

As the storm neared landfall on Friday afternoon, the MSP began instructing clients to shut down on-premises servers before those employees left for the day.

The hope is that once the storm passes, many of those servers can quickly be powered up and the businesses can get up and running.

That’s assuming, of course, that the flooding is manageable and the boxes stay dry.

“Most of our clients, even in a single story building, the servers are elevated,” Rorie said. “We don’t anticipate any servers being flooded.”

But for some customers with 24/7/365 requirements, shutting down servers until the storm passes represents an unacceptable interruption to their businesses.

One of Elevated Technology’s customers is the Houston branch of a Dubai-based private jet-booking outfit that arranges global travel for top executives of major companies, like Nike.

“They were going to try to work through the storm,” Rorie said.

“They said, ‘we get what you’re trying to do for us but we’ll take a chance,’” the client said. “’We’re going to roll the dice because we want to turn out as much work as we possibly could.’”

A great many of the support tickets the MSP has received since the storm began involve folks seeking to solve VPN access problems so they can work from home.

It’s a problem with which Elevated Technology can empathize.

Despite being located on the fourth floor of an office building on the western side of the city, Rorie and all of his employees have still been forced to work remotely.

“I can get even get out of my own neighborhood,” he said. “I’m talking to you from my garage, looking at the water rising in the driveway.”

The company’s manpower took a further hit when one of the five employees lost power at his residence.

Some reports suggest that as many as 40 percent of small businesses in the Harvey’s path might never recover.

That could have long-lasting consequences for the revenues of firms like Elevated Technologies.

“That is a valid concern,” Rorie said.

But by far his greatest worry stems from uncertainty about how much longer the storm will last, and how much more damage it’ll wreak on his customers before it’s all over.

“There is so much more potential to do damage than has already been done,” Rorie said “Until the flooding subsides and clients get back to work, we won’t know the full extent. “My biggest fear is it doing much more damage (because) we’re going to have our hands full when everyone returns next week.”