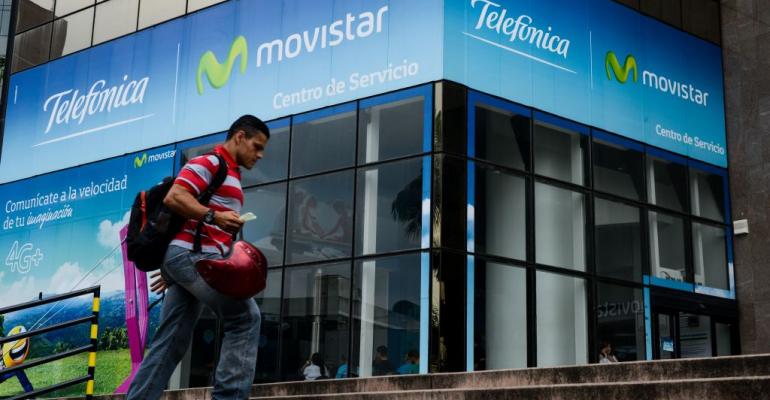 Hard-Knock Life Gets Harder in Venezuela With Internet Near Bust

Movistar said the surge in data use during Venezuelans’ first week of sheltering in place was equal to the entire jump for all of 2019.

Alex Vasquez and Patricia Laya (Bloomberg) -- Venezuela’s telecommunications network was far from robust before the nation went into lockdown over the spreading coronavirus. Now, with millions video chatting and streaming while stuck at home, it’s on the brink of collapse.

Telefonica SA subsidiary Movistar, the country’s biggest operator, said the surge in data use during Venezuelans’ first week of sheltering in place was equal to the entire jump for all of 2019. This despite the fact that the country has lost millions of users in recent years, according to regulator Conatel.

“All this in a network that was already operating at maximum capacity,” Jose Luis Rodriguez Zarco, president of Movistar Venezuela, said in a March 20 letter asking customers to use the network responsibly. “Our service is indispensable for critical sectors such as health care and the food industry.”

The socialist nation already has the slowest Internet speed in Latin America, according to the Speedtest Global Index. Experts say that years of under-investment and neglect, rolling blackouts and strict price controls have left Venezuela’s infrastructure years behind other nations in the region. Movistar plans cost on average the equivalent of between 15 cents to $1 per month.

Since the national quarantine began on March 17, each day has marked a new peak in data consumption, according to a person with direct knowledge of the private figures. During the first five days, Netflix streaming more than doubled, the person said, who isn’t authorized to speak publicly about the data. Use of Twitter, TikTok and WhatsApp surged about 40% each.

Besides making life under lockdown a whole lot more unbearable, the patchy Internet service threatens to further weigh on the economy.

“My Internet cuts off all the time -- I’m either late or I hear half of what’s being talked about” in conference calls, said Javier Valero, a 23-year-old lawyer in Caracas who has been working from home for the past two weeks. “It’s so slow it’s tragic.”

Fuel shortages are making the problem even worse. Mobile towers in Venezuela operate on diesel, while the closing of many gas stations makes it impossible for technicians to get out to fix failures at towers. Vandalism is also an issue as people strip valuable materials like copper that can be sold overseas, which has weakened the back up system for all operators, including state-owned Movilnet, the second-biggest.

“The telecommunications industry here is unstable, partly due to the difficulty of buying or replacing equipment,” said Jose Miguel de Viana, former president of Movilnet. “By forcing operators to cap rates, they’re unable to pay for the capacity needed to handle usage increases.”

In a recent announcement, President Nicolas Maduro ordered telecom companies to continue offering their services during the quarantine even if customers are unable to pay for it.

“During the next six months, it’s forbidden to cut off telecommunications services in the country,” Maduro said from the presidential palace on March 22. Venezuela has reported 107 cases of coronavirus with one death.

The order could force providers including AT&T Inc., which offers pay-TV service through its DirecTV division, to operate at a loss. It could also impact privately-owned Digitel, which reported that mobile data consumption increased 40% in the first week of quarantine, according to a statement.

On Wednesday, the nation’s Science Ministry said the Simon Bolivar satellite it launched in 2008 to widen Internet access to the country’s more rural areas has stopped working. Some states have reported trouble tuning into local TV channels since it fell out of orbit weeks ago.

“Service comes and goes, during the day it’s very slow, which makes any kind of video conferences for work difficult,” Mary Elizabeth Baez, a 23-year-old engineer, said. “And not to mention video apps like Netflix. Only after 11 p.m. does it get a little better.”