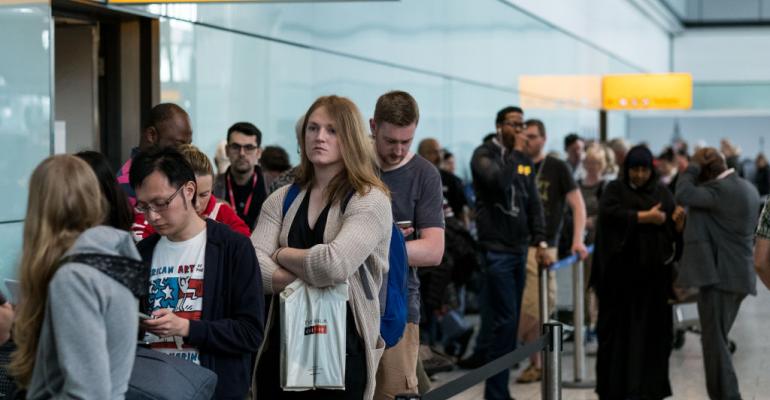 Jack Taylor/Getty Images
People queue to speak to British Airways representatives at Heathrow Airport Terminal 5 on May 28, 2017 in London, England. Thousands of passengers had their travel disrupted after a BA IT failure caused the airline to cancel most of its services.
Manage>Uptime

Executives have pointed to a UPS failure, but the exact cause of the incident, which stranded 75,000 passengers, remains a secret.

CBRE said it has settled a lawsuit with British Airways, which sued the commercial real estate giant in relation to a data center outage over a holiday weekend in 2017. The airline was forced to ground hundreds of flights when its CBRE-managed Heathrow data center lost power, and the head of its owner IAG later said the outage caused it £80 million in losses.

BA filed the lawsuit last year. The companies did not disclose the terms of the settlement, but part of it appears to be that CBRE will continue providing services to BA in some capacity.

“BA and CBRE are pleased to have reached agreement (with no admission of liability) and continue to work together,” a CBRE spokesperson said in a statement issued Monday.

Various statements by officials about the BA data center outage, which stranded at least 75,000 passengers in May 2017, point to a problem with one of the facility’s uninterruptible power supplies. What caused the UPS problem, however, is unclear.

IAG officials have said that the facility had lost power for a short period of time, but the real damage was done when power was turned back on in an unorderly manner, causing a power surge. Willie Walsh, IAG’s chief executive, told reporters in Mexico that an engineer at the data center had disconnected a power supply, causing a surge when it was reconnected. CBRE has denied this explanation.

Reports point to BA’s Boadicea House data center as the primary site that failed that May. It’s unclear why the failover to the airline’s other data center in the area didn’t work. One clue may be in an email to staff from IAG’s head of group IT, which was leaked to the UK’s Press Association and said that someone had overridden a UPS, resulting in “total immediate loss of power to the facility, bypassing the backup generators and batteries. This in turn meant that the controlled contingency migration to other facilities could not be applied.”