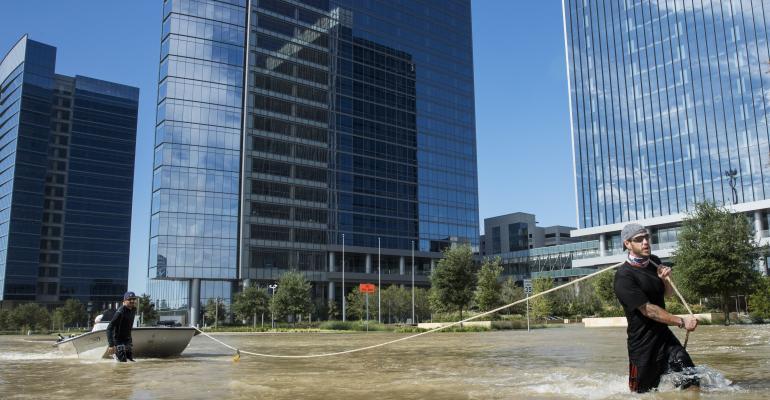 Erich Schlegel/Getty Images
Rescuers from Odessa, Texas make their way along Eldridge Parkway in the Energy Corridor of west Houston on August 30, 2017 in Houston, Texas.
Uncategorized

After Days at Work, Houston Data Center Staff Finally Went Home - As Hurricane Harvey was preparing to slam Houston and the surrounding areas last Friday, data center operators with facilities in the region staffed up, with the knowledge that the staff may be unable to leave work for an undetermined number of days. As had been feared, Harvey’s landfall, followed by unprecedented, devastating flooding in Houston, resulted in submerged roads, leaving most of them stranded at work.

Four Providers’ Houston Data Centers Online, but Access Roads Flooded - The hurricane (which experts have referred to as unprecedented) and subsequent flooding left more than 100,000 residents and businesses without electricity as of Monday morning, but Equinix, CyrusOne, Data Foundry, and Digital Realty Trust data centers in Houston did not lose utility power. Staff at the facilities were safe, according to sources.

VMware Pitches Hyper-Converged Infrastructure for Edge Computing - For companies looking to deploy edge computing, be it computers in retail stores, in remote offices, or on factory floors, VMware has a new hyper-converged cluster powered by vSAN, its answer to hyper-converged infrastructure leaders like Nutanix and Hewlett Packard Enterprise-owned SimpliVity.

You Can Now Spin Up VMware Servers in Amazon Data Centers - Ever wish you could just run VMware on Amazon’s cloud? Now you can, but not on the entire AWS cloud, just in one availability region hosted in Amazon data centers in Oregon.

HPE and VMware Team Up on Composable Infrastructure, Hybrid Cloud - This is all about the hybrid cloud of course, which providers have come to see as the brass ring for attracting enterprise clients. The solution promises to simplify transformations to a hybrid infrastructure by enabling single-click deployment of traditional and private cloud workloads and allows infrastructure to be dynamically reallocated in minutes.