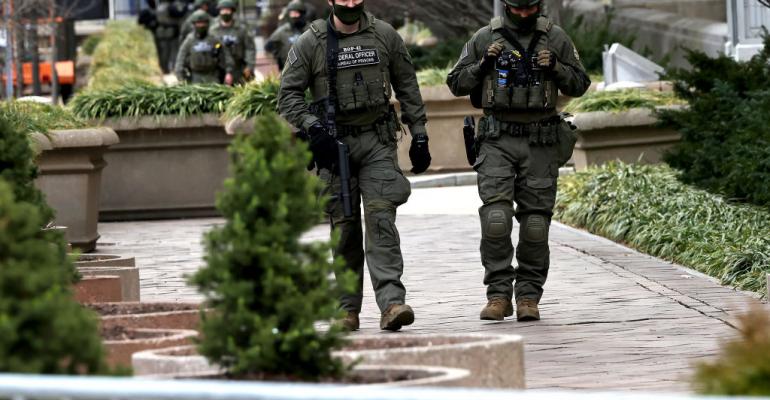 Michael M. Santiago/Getty Images
Federal law enforcement officers patrol the grounds of the Department of Justice on January 17, 2021 in Washington, DC, as preparations are made for Joe Biden's presidential inauguration.
Uncategorized

Microsoft’s Tiny Data Center Liquid Cooling Experiment Is a Big Deal - It’s even bigger than that time its researchers sunk a submarine-like data center in the ocean.

Cisco’s Plan for Delivering the Data Center (and More) as a Service - The networking giant is joining HPE and Dell in the pursuit of cloudifying the experience of consuming data center tech.

Equinix Expanding Capabilities of Its Open Source Bare Metal Automation Platform Tinkerbell - More enterprises are said to be taking interest in the platform now that it's been open sourced as a Cloud Native Computing Foundation project.

HPE OneView: An Overview of the Popular IT Management Platform - The platform is designed to turn servers, storage, and networking equipment in your data center into software-defined infrastructure.

Open19, the LinkedIn-Born Data Center Standard, Kicks Off a Second Act - The project has joined the Linux Foundation, with a version 2 in the works, which will increase power density and bandwidth, add liquid cooling options.

One Year After Bankruptcy, INAP Stable, Focused on Growth, Says CEO - Mike Sicoli joined INAP to fix it. He says the company is now steady, prepared for the “street warfare” for share of the booming digital infrastructure market.