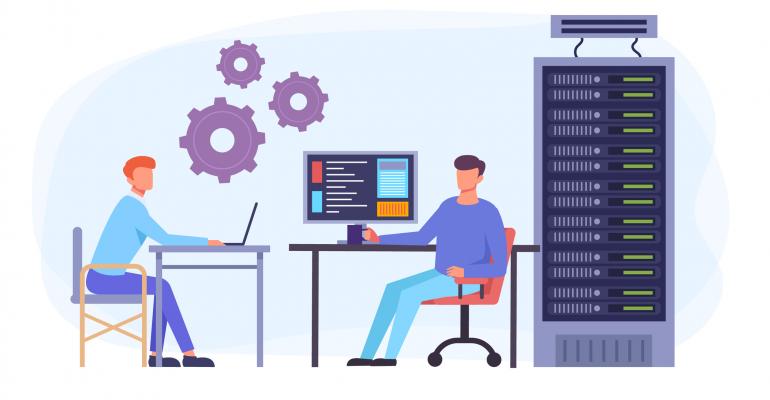 Switch and Elliott Investment Management, the data center provider’s largest Class A shareholder, are taking a close look at the company’s financial structure, exploring a REIT conversion as one of the potential outcomes of the review.

Elliott, a well-known activist investor, holds 11 percent of Switch Class A shares. As part of the process being kicked off, Switch plans to add Elliott portfolio manager Jason Genrich to its board of directors. He will be one of four Switch directors on the REIT committee evaluating the conversion.

All three operators that reported this week had a solid quarter, with healthy revenue growth. (Numbers in the chart below)

Iron Mountain’s numbers in the chart below reflect the entirety of its business, which in addition to a growing data center operation also includes the document storage and management services the now seven-decades-old company is best known for. (Iron Mountain is celebrating its 70th anniversary this month.)

A couple notes on the Switch numbers in the chart:

Dropbox announced that the energy used by storage servers in its data centers is now “covered by 100% renewable electricity.”

It’s unclear whether that 100% is achieved through offsets, renewable energy credits, purchases of energy that powers facilities directly on the local grids, or a combination of all three. (A combination is the most likely scenario.)

Vantage Data Centers has set a goal to fully eliminate carbon emissions that result from its operations by 2030. It plans to get there by working with utilities, investing in technology, and collaborating with its data center tenants.

The company acknowledged that it may not be possible to go fully carbon-free within the timeframe it’s committed to and that it will likely have to use carbon offsets to fill the gap.

I Squared Capital has agreed to acquire Kio Networks, which it described as the largest data center provider in Mexico.

The sale price was not disclosed, but Bloomberg reported last year that Kio, backed by Tresalia Capital, was exploring a potential sale that could fetch as much as $1 billion.

Kio is a major data center provider to the Mexican government. Its reliance on that relationship as a business was cited as a factor working against Tresalia’s efforts to sell. Moody’s last year explained its B2 rating of Kio’s stock (a rating reserved for risky, junk stocks) by the provider’s “weak liquidity and revenue concentration in Mexico, with a particularly large exposure to the government of Mexico and to some large contracts.”

MDC, which describes itself as an “independent platform and wholesale colocation provider,” said it will start by building 20MW data centers in Mumbai, Delhi, Chennai, Bangalore, Hyderabad, and Kolkata. The company said it has signed MOUs for data center development in three of those markets with the respective state governments.

In its announcement, MDC said that besides India’s growing digitization, data center demand in the market could be further spurred by enactment of the Personal Data Protection Bill that’s been under consideration since 2019. If enacted, the bill would require all “sensitive personal data” of Indian citizens to be stored in India.

Other Great Reads (and a Podcast) on DCK This Week

VPS CEO Dean Nelson on Flipping Data Centers’ Wasteful Status Quo - The former infrastructure head at eBay and Uber talks about his first year on the vendor side, VPS’s technology vision, zero carbon, and more on The Data Center Podcast.

SolarWinds CEO Talks Securing IT in the Wake of Sunburst - Lessons learned from the pandemic and the aftermath of the Sunburst cyberattack puts the IT trends report issued by SolarWinds in a special context.

Inside the Famed Black Hat NOC - Network operations center managers Bart Stump and Neil Wyler (aka Grifter) again head up the show network, but with a new hybrid twist.

A Look Into an XR Future With IFTF's Toshi Anderson Hoo - AR/VR technology is on its way to becoming bigger than gaming. Get a feel for what work may be like a few years from now at Data Center World.