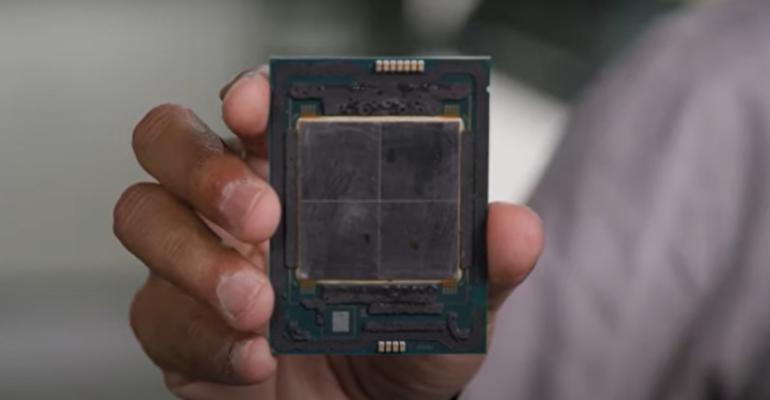 On Thursday, a few weeks after its CEO Pat Gelsinger pledged to continue pursuing Moore’s Law “until the periodic table is exhausted,” the company previewed upcoming data center and consumer-device hardware it’s been designing in its pursuit.

As Raja Koduri, Intel senior VP and general manager of its Accelerated Computing Systems and Graphics Group, put it, Intel has had “almost a decade-long problem. We were behind on throughput compute density and support for high-bandwidth memories.”

He didn’t name the company Intel’s been behind of in this area, but it was clearly Nvidia, which largely owes its massive lead in the AI accelerator market to this throughput advantage of its data center GPUs.

Google to Spend $1B to Triple Its Ohio Data Center Capacity

Google said Thursday that it’s planning to spend $1 billion to triple the capacity of its data center campus in New Albany, Ohio. Its initial investment in the campus was $600 million, the company said when it broke ground in New Albany in 2019.

New Albany, a Columbus suburb, has grown into a major hyperscale data center hotspot. Facebook and AWS have built data centers there, and so have specialist developers, such as Compass Datacenters and Stack Infrastructure.

Orlando’s Orange County Convention Center this week hosted the first live and in-person data center industry conference since the start of the pandemic, and the event was a success. The Data Center World 2021 expo floor was full of vendor booths and conference attendees checking out the wares, keynotes were well attended, people mingled in the hallways, and the atmosphere, save for face masks and pervasive hand sanitizer dispensers, felt about as Data Center World used to feel pre-2020.

There were keynotes on the future of virtual, augmented, and other “realities” in the workplace (by Toshi Anderson Hoo, director of Institute for the Future think tank’s Emerging Media Lab), the state of play in quantum computing (by Celia Merzbacher, executive director of SRI International’s Quantum Economic Development Consortium, or QED-C), the state of play in cybersecurity (by JetBlue CISO Timothy Rohrbacher), and what businesses can learn from sports teams about applying data analytics to measure performance (by Christina Chase, lecturer and managing director of MIT Sports Lab).

One of the new things at the show this year was a noticeable presence of data center market analysts from Omdia, the large technology market research organization the event’s organizer, Informa Tech, formed last year to unify four of its research brands: Ovum, IHS Markit Technology, Tractica, and Heavy Reading.

Back in May, the City Council of Mesa, Arizona, voted to approve a massive Facebook data center construction project in the town. The project drew controversy because of the water the future facility would need to draw for cooling in a place that struggles with drought.

This week, Facebook announced a commitment to become “water positive,” or restore more water than it consumes globally by 2030. It plans to achieve the goal by funding water restoration projects in water-stressed regions and by improving water efficiency at its facilities.

Total water withdrawal to cool Facebook data center campuses in the US (including an “East Coast Leased Data Center Facility”) was 3 million cubic meters (790 million gallons) in 2020, according to the company’s 2020 sustainability report.

Facebook said its data centers’ Water Usage Effectiveness ratio in 2020 was 0.30, while the industry average WUE that year was 1.80. WUE is defined as liters of water used to cool 1kWh of IT load.

Facebook also uses water to maintain a certain level of humidity inside its data centers required for the IT equipment to function for the duration of its warranty. The company recently made a big efficiency improvement in this area.