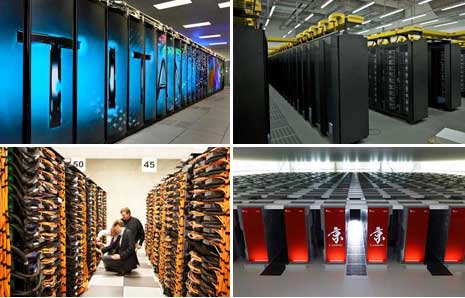 The twice-a-year list of the Top 500 supercomputers documents the most powerful systems on the planet. Many of these supercomputers are striking not just for their processing power, but for their design and appearance as well. Here's a look at the top finishers in the latest Top 500 list, which was released earlier today at the SC12 supercomputing conference in Salt Lake City, Utah.

The new champion of the Top 500 is Titan, a Cray XK7 system installed at Oak Ridge National Laboratory in Tennessee, which achieved 17.59 Petaflops (quadrillions of calculations per second) on the Linpack benchmark. Titan has 560,640 processors, including 261,632 NVIDIA K20x accelerator cores. The 200-cabinet Cray supercomputer has a second life, having ruled the Top 500 as Jaguar. The system has been overhauled with faster hardware and networking system, and taken on a new name to reflect its super-charged capabilities. Titan has been accelerated by a hybrid computing architecture teaming traditional central processing units (CPUs) from AMD with the high-speed graphics processing units (GPUs) from NVIDIA to create a faster and more efficient machine. Each of Titan’s 200 cabinets will require up to 54 kilowatts of power, an intense high-density load. The system is cooled with an advanced cooling system developed by Cray, which uses both water and refrigerants. The ECOPhlex (short for PHase-change Liquid Exchange) cooling system uses two cooling loops, one filled with a refrigerant (R-134a ), and the other with chilled water. 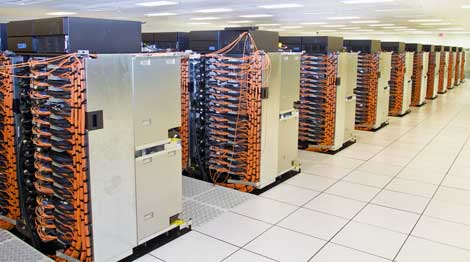 Sequoia, the LLNL system that was named the most powerful supercomputer in the world Monday in the top 500 list. (Photo: IBM)

Falling to the second position is Sequoia, the champ in the June 2012 Top 500, a Blue Gene/Q supercomputer built on IBM Power architecture at the Department of Energy's Lawrence Livermore National Laboratory in Californa. Sequoia consists of 96 racks; 98,304 compute nodes, 1.6 million cores and 1.6 petabytes of memory, and reached 16.32 Petaflops  on the Linpack benchmark. The National Nuclear Security Administration uses Sequoia to research the safety, security and reliability of the United States’ nuclear deterrent – replacing the need for underground testing. The Blue Gene/Q Sequoia is eight times more powerful than its predecessor BlueGene/L technology. 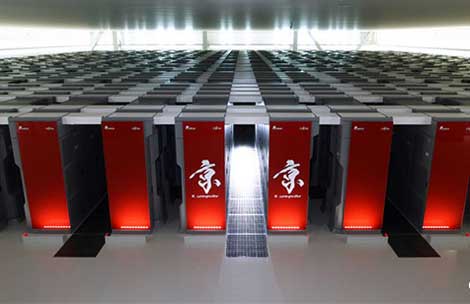 The “K” supercomputer, a two-time Top 500 champion, is now the No. 3 system.  Installed at the RIKEN Advanced Institute for Computational Science (AICS) in Kobe, Japan, the K Computer it achieved an impressive 10.51 Petaflop/s on the Linpack benchmark using 705,024 SPARC64 processing cores. The K Computer is  joint project by Fujitsu and the RIKEN center, and was the first supercomputer to achieve a performance level of 10 Petaflop/s, or 10 quadrillion calculations per second. The K computer had taken the No. 1 position in both June 2011 and November 2011. 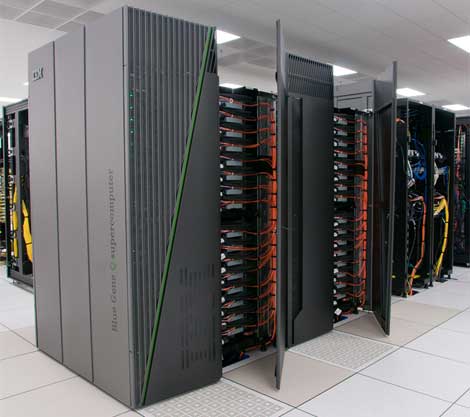 Mira, a Blue Gene/Q-based system housed at Argonne National Laboratory (ANL) is now the fourth-fastest system in the world. Mira is being used to significantly advance science and industry. Mira has 48 racks and 786,432 processors, and weigh 104 tons. It is 20 times faster and five times more energy-efficient than Argonne's current system, Intrepid.  Under the umbrella of Argonne’s Early Science Program, Mira will be assisting research in earthquake modeling, quantum mechanics, the effect of clouds on the climate, and materials science. Any researcher in the world can apply for time on Mira to run programs for their experiments. 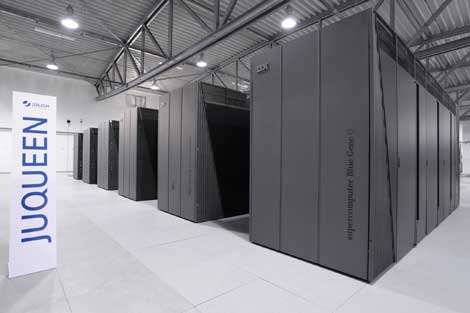 In the fifth position on the Top 500 is JuQueen, the newest system at the Forschungszentrum Juelich (FZJ) supercomputing center in Germany, whose JuGENE system previously held a spot in the top 10. The structure of the Blue Gene/Q is similar to that of the Blue Gene/P with increased performance metrics and on-board water cooling. In September, 16 additional Blue Gene/Q racks were installed in JuQueen.  The last step of the JUQUEEN reconfiguration is planned for early 2013. Four more Blue Gene/Q racks (GCS/NIC) and new storage hardware and software will be installed.