We continue our illustrated review of the top finishers in the latest Top 500 list, which was released Sunday, Nov. 14 ahead of the SC10 conference. See part one for images of the five most powerful machines. We continue at number six. 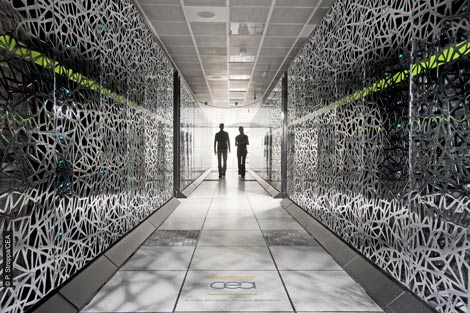 Tera-100 is now Europe's most powerful supercomputer. The  system resides at the Commissariat a l'Energie Atomique (CEA), where it supports the French nuclear weapons simulation program. era 100 consists of 4,300 bullx S Series servers, which were introduced by Bull in April 2010. It features 140,000 Intel Xeon 7500 processing cores, 300TB of central memory and a total storage capacity of over 20PB.

When the Roadrunner system at Los Alamos first appeared at the top of the June 2008 TOP500 list, it was the world’s first supercomputer to achieve a top performance of more than 1 petaflop/s (1015 floating point operations per second). It has now slipped to seventh place in the latest survey.

Kraken, an upgraded Cray XT5 system at the National Institute for Computational Sciences (NICS), claimed the No. 8 position with a performance of 831 teraflops. Kraken is used to enhance the efficiency of biofuels, develop more effective climate and weather modeling, and analyze disorders that throw the heart out of rhythm. The NICS is a partnership between the University of Tennessee and Oak Ridge National Lab.

Clocking in at number nine is the Jugene supercomputer is housed at the Juelich Supercomputing Centre built on IBM BlueGene/p technology. With its 72,000 processors, Jugene is used for very compute-intensive simulations in materials science, environmental research and particle physics.

The new supercomputer named "Cielo," the Spanish word for sky, will support all three national laboratories at the National Nuclear Security Administration (NNSA), including Los Alamos, Sandia, and Livermore. Cielo is the next generation capability class platform for the Advanced Simulation and Computing (ASC) program. We haven't yet located images of Cielo, which was installed in third quarter of 2010, with additional capability planned for 2011 (if anyone at Los Alamos has images available, please contact us). Cielo’s architecture is based on Cray’s next generation “Baker” architecture with AMD’s new Magny-Cours processor, Cray’s “Gemini” high-speed interconnect and Compute Node Linux operating system.