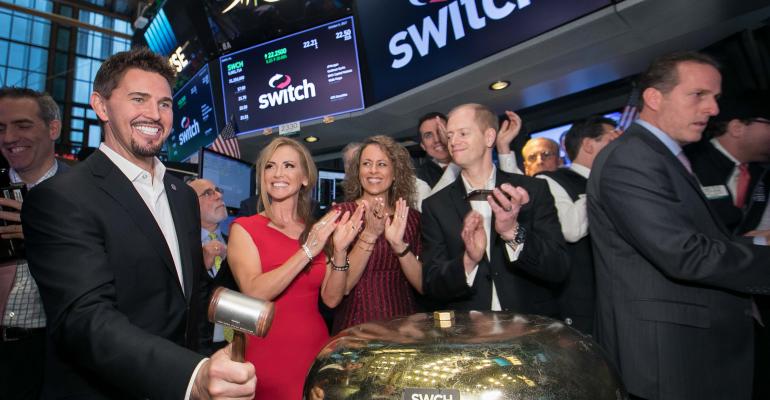 Switch Reports Another Weak Quarter, But Is There an Upside?

Las Vegas-based Switch, Inc. had operated for 17-years as a privately-held partnership prior to listing on the NYSE last October. The sizzle of a technology infrastructure company with tons of intellectual property, much of it around a proprietary modular data center design, initially attracted plenty of investor interest. But some block-and-tackle issues operating as a public company seem to have been a challenge out of the gate.

The obvious issue is that the tech industry growth story in general has slowed considerably since October 2017, disappointing investors and analysts. However, there is another crucial factor regarding Switch shares specifically: there is a lot more of them trading this week. If you don't closely follow this data center provider, this aspect of its corporate structure is easy to miss. Here is a brief explanation.

The Alchemy Behind "Redemption"

Switch has three classes of shares: 1) Class-C shares, which founder, chairman, and CEO Rob Roy owns in their entirety and which give him total voting control; 2) Switch, Ltd. partner units, which are basically equivalent to Class-B shares; and 3) The familiar Class-A common shares that trade on the NYSE. Once every quarter, holders of Class-B shares are allowed to convert them to Class-A, minting more Class-A shares.

On May 18, 13.4 million additional common shares were "redeemed" and began to trade publicly three days later. This is a huge percentage increase in the common share "float," allowing Switch, Ltd. partners to cash out if they choose to sell on the open market.

There will be redemption cycles in August and November, but the specific dates have not been public. The exact number of shares redeemed each quarter is also an unknown. It could be more or less than May’s 13.4 million. CFO Gabe Nacht has explained that Switch, Inc. has the right to purchase these shares for cash. However, the company believes having a larger float of publicly traded shares is a better option this quarter.

Additionally, Switch Class-A shares receive a small $0.06 annual dividend, which could add up over time as well. The Class-B and Class-C shares do not receive a dividend distribution.

Tale of the Tape: Lower Lows On Tuesday May 22, the share price closed at a new post-IPO low of $12.30 per share after hitting an intraday low of $12.15. The overhang of a larger supply of shares is likely part of the story.

Of course, there is the other side of the coin for investors to consider: the disappointing Q1 2018 earnings print and vanilla full-year 2018 guidance.

The first-quarter earnings print began with this quote from Roy: “Switch continues to execute on its market expansion strategy. We are excited about our growth prospects in 2018 in our Citadel and Pyramid Primes, and the continued growth in our Core Campus.”

Citadel refers to the immense Switch data center campus outside of Reno, Nevada, while Pyramid is the Grand Rapids, Michigan, campus. The Core Campus is the massive Las Vegas property with over 2 million square feet, developed over the past 17 years. The future Atlanta Prime is called The Keep, and land development is underway for a 2019 planned opening. But the actual results reported last quarter were less than impressive. In a nutshell, revenue growth was under 10 percent, adjusted EBITDA declined by a small amount from last year, with EBITDA margins dropping 480 basis points to 48 percent from 52.8 percent for the same period in 2017.

Earlier this month, Switch pre-announced a 15MW lease in Reno and Las Vegas to an international streaming media company and other major leases in Las Vegas and Grand Rapids. During the earnings call, management explained that the 15MW deployment would be 1MW initially, and then ramp 1MW every two months going forward. This might have disappointed some investors who thought it was a single hyperscale deployment to be booked sooner.

Could the Glass be Half-Full?

Switch’s full-year 2018 revenue guidance of $423 million to $440 million represents 14 percent growth at the mid-point. This was a considerable improvement over Q1 results and implies a stronger second half of 2018.

On May 17, Switch CFO Gabe Nacht participated in a conference Q&A with JP Morgan analyst Richard Choe. There was a lot of additional color shared, which helped to put Switch Q1 results in perspective. Here are some highlights:

Switch has a unique business model serving the entire US from four regional Primes campuses located in Las Vegas, Tahoe/Reno, Grand Rapids, and next year Atlanta. However, the telecom purchasing cooperative can be utilized by customers at any location, not just Switch campuses. The immediate economics and potential upside for Switch are hard to discern from filings.

Notably, Switch maintains the same pricing to customers regardless of geographic location. The logic is customers are getting the exact same product design, resiliency, and flexibility to increase power density in each location. This is unusual. It will be interesting to see how that pricing model works in Atlanta, a more competitive, top-tier data center market.

Switch can densify the power significantly at its 100 percent occupied data centers. Nacht used LV7 as an example, where an additional 40MW of 100MW is available. This could be a high-margin opportunity for Switch if customers refresh with higher-density racks.

Meanwhile, there are also some concerns, including: slower growth, transparency, corporate governance, and the Class-B share quarterly redemption cycle weighing on the share price. That said, Switch trading near $12.00 per share could be an attractive speculative buy for long-term investors. There are a lot of things that Switch is doing right too, so the glass could very well be half-full.