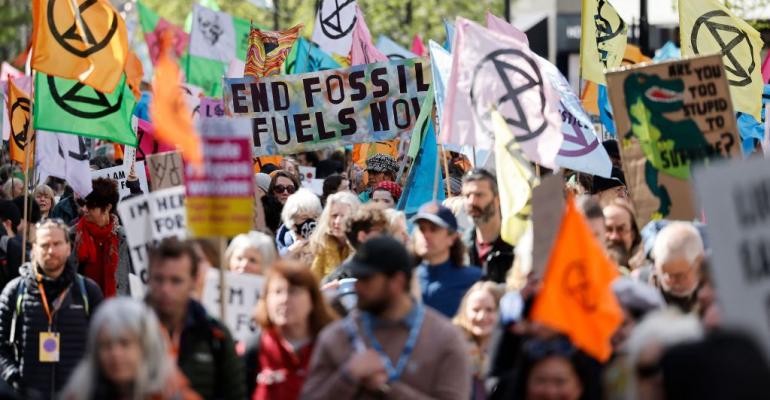 Getty Images
Activists march along Oxford Street during a demonstration by the climate change protest group Extinction Rebellion in London on April 9, 2022.
Sustainability

NIMBYs Against Data Centers: A Problem That Requires Diplomacy

“The top line issue is that the data center industry is not well-understood,” suggests Data Center Coalition’s Josh Levi.

A strange trend has been manifesting across the industry. Data centers – usually thought of as quiet, clean neighbors that provide an economic boom to rural areas – are getting the kind of not-in-my-back-yard pushback usually reserved for shopping malls and homeless shelters.

What is going on?

Anti-data center campaigners – some of whom use Facebook to organize protests against data centers built by Meta – say they don’t have a problem with data centers as a concept, just the locations.

“I don’t object to data centers at all,” said Karen Sheehan, director of the Coalition to Protect Prince William County, adding that she had been the program manager for Time Warner Cable’s data center consolidation project from Virginia to Colorado. Northern Virginia has a 10,000-acre “overlay district” intended to host data centers, and it’s not full, she said.

Developers are attempting to site data centers outside of that overlay district because land is cheaper elsewhere, said Elena Schlossberg, executive director of the organization. Land costs more than $1 million an acre in the overlay area, and $25,000 per acre in the “rural crescent” area in Northern Virginia that’s seeing citizen pushback, she said.

The coalition is also concerned that local residents are on the hook to pay for the infrastructure that data centers require. “It goes into the grid, but for that bulk load customer need, you wouldn’t need that transmission line,” Schlossberg said.

Counties agree that they’re seeing more opposition to data center proposals, if only because these facilities are now so prevalent that people are more aware of them.

“When you reach a critical mass like we have, you can’t really hide who and what you are anymore,” said Buddy Rizer, executive director of economic development for Loudon County, who guided the growth of the local data center industry during his 15-year career. “We have a lot of data center buildings, and they’re big buildings.”

Altogether, Loudon County has about 26 million square feet of data center space among about 140 buildings, with more under development, he said.

What data centers are doing to respond

In response, data centers are working more closely with communities, publicizing what they’re doing to improve sustainability, and how they support the region in general. For example, in Loudon County, data centers have brought in thousands of jobs, as well as half a billion dollars in local tax revenue in the past year alone, Rizer said, noting that the local tax rate has dropped from $1.285 to $0.89.

Once data center developers have a site in mind, they need to put together a coalition in the community to help with the approval process, said Adam Waitkunas, president of Milldam Public Relations, a Boston-based company specializing in data centers.

Developers also need to be aware of the demographics of the community and pitch their proposal accordingly, Waitkunas said. “Research is key,” he noted. “A lot of smaller communities have figureheads who can help these companies navigate through the process.”

For example, affluent communities are going to be more concerned with maintaining open spaces and potential noise issues, and won’t necessarily be persuaded by talk of high-paying tech jobs, Waitkunas said. For noise pollution, for instance – an issue of increasing prominence, he said – operators should see what they can offer to overcome concerns, such as using liquid cooling systems rather than air cooling.

“There are definitely significant questions around the industry, and that has led to some of the pushback,” said Josh Levi, president of the Data Center Coalition, a trade association of data center owners and operators with 19 members. “It’s something that we as an industry are taking very seriously. My belief is that it is rooted in a need for education and outreach. The top line issue is that the data center industry is not well-understood.”

That’s not surprising, Levi said, because for security reasons, the industry tends to be pretty close-mouthed. “It doesn’t do a lot of advertising or have signs or tours to general stakeholders,” he said. “As a closed industry, that raises a lot of questions. What happens behind those walls? What impacts are there? What don’t we know? I have been very pleased to see the industry do more outreach.”

For example, some data centers are now putting up signs and logos where they didn’t exist before, and conducting tours of groups ranging from schoolchildren to senior citizens and policy makers, so they can see what’s inside, Levi said.

“It’s easy to look at the buildings and forget that it’s your neighbors working in there,” Rizer said.

Meeting with students also helps with one of the industry’s other big problems: recruitment. “We had data centers in Loudon County struggling to fill vacancies,” Levi said. “At the same time, students were driving by in buses every day and were told these are empty buildings with no employees inside.” In community colleges in the area, students can get a data center operator certificate in a year and a degree in two years, for jobs in an industry with a good compensation profile and career trajectory, he said.

Data centers are also promoting their philanthropic activity more – and associating it more closely with the big buildings. Last year, Loudon County held a COVID-19 vaccination clinic, and each data center sponsored a food truck, which provided more than 700 meals over the week-long period, Levi said.

The key problem is doing all this at scale. For example, two years ago in Ashburn, Virginia, the association held an event at a microbrewery that drew 200 people to hear a 30-minute presentation about the industry and then ask questions for another hour, ending with offers to provide tours. “Trying to get that done at scale is a very important goal for the industry,” Levi said. “We want to do everything we can to explain what these buildings are, the role they play in society, and their economic impact.”

Ultimately, it’s important to realize the community feedback is part of the process, Rizer said. “At the end of the day, we’ve approved 10 million square feet and only disallowed one project,” he said. “There’s talk, and there’s action. The county is just trying to take a very thoughtful look at where and how much we want to consider building in certain places.”