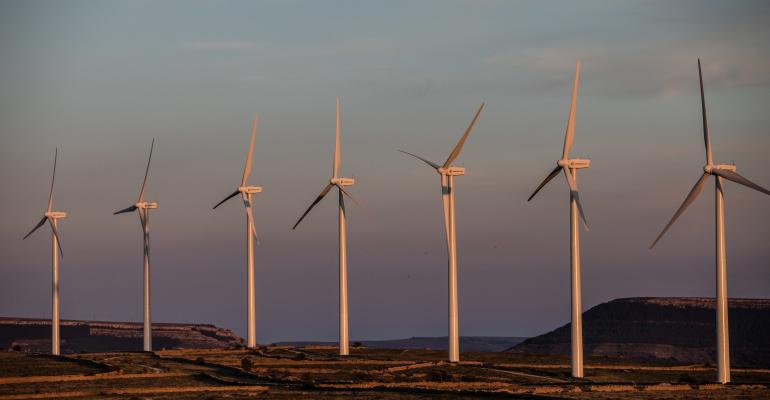 The first and most obvious application for Google’s AI is to better understand what the utility might expect from wind patterns in the future. This is fundamentally about averting risk.

(Bloomberg) -- Last week, French utility Engie SA announced that it will use Google’s AI-powered wind-prediction capabilities to optimize operations of its German wind assets. The pilot program is an extension of Google’s in-house work that it says allows it to capture higher revenues by scheduling hourly wind-power commitments to the grid up to one day in advance. A Google executive calls this offering “a trading recommendations tool,” which it is — but it is also a source of intriguing and important strategic questions for Google, Engie, and Big Tech in energy in general.

Google’s artificial intelligence sister company, DeepMind, continues to expand its scope, scale and capabilities. Essentially, feed DeepMind with a big and difficult set of problems to solve and it can often solve them. In 2020, for instance, DeepMind’s AlphaFold initiative determined the structures of proteins, a problem that a scientist in 1969 said would take longer than the age of the known universe if done by brute force.

At the same time, this remarkable capability is ancillary, at best, to Google parent company Alphabet Inc.’s key business of search, which generated more than $90 billion in operating income in 2021, while its cloud and “other bets” groups working on health and transportation and AI had negative operating income.

Perhaps underscoring that, less than a year after DeepMind announced its protein-folding success, it made AlphaFold free to the world. Better wind-prediction capabilities could mean almost nothing to Alphabet besides allowing it to sell more cloud services to utility customers.

For Engie, the first and most obvious application for Google’s AI is to better understand what the utility might expect from wind patterns in the future. This is fundamentally about averting risk. Predicting a day and a half out will allow Engie to plan for when wind is available and, just as important, to plan around when it is not. It should allow the utility to better schedule its other generators in order to meet demand when wind supply is low.

But there are other approaches that these capabilities could unlock for Engie as well. Knowing wind patterns 36 hours in advance could also let it take on more market risk. Engie could be more willing to make commitments about when wind projects will generate energy, and could do so further into the future than was possible before. The company could become more confident in playing in spot electricity markets at times when prices are very high. In theory, it could even use its wind assets in a purely “merchant” fashion — completely exposed to the market price of electricity, with all of the potential upsides to be captured and downsides to be planned for.

Anticipating what comes next for a DeepMind wind application requires us to ask several sets of questions. The first set is technical. To what extent can this technology improve? How much further out can its predictions reach in time, and how much more accurate can they become? Does Google’s set of predictions integrate well with a utility or independent power producer’s own planning and prediction systems?

These sorts of questions should be relatively easy to answer, company-to-company. Engineers meet engineers, software developers talk to each other, corporate risk offers get together and so on.

The second set of questions are power-market questions, and these are very different in nature. How open is a power market to merchant generation? How far ahead do grid operators schedule their power dispatch? Will state or national electricity regulators allow companies to take full merchant risk with variable renewable generation? These questions may take some time to answer.

A final set of questions concern regulation, policy and perhaps politics too. Will a state public service commission decide that DeepMind-based wind-prediction technology is impossible to evaluate and forbid its use? Will there be any political blowback to Big Tech having influence, however narrowly and technically defined, in power markets? There may not be clear answers to these questions, at least not at first. But they may not ultimately matter that much.

In his 2021 essay “Outgrowing Software,” independent analyst Benedict Evans says that “when software eats the world, the questions that matter stop being software questions.” That is, technology can enter a market like books, music, retail or movies — but eventually, the defining questions are those rooted in the incumbent industry. Take Netflix, for instance. It “used tech as a wedge to enter the TV industry,” Evans writes, but “all the questions that matter for its future are TV questions,” like what the lifespan of its shows will be and what will happen with sports rights.

I imagine that the same will hold true of artificial intelligence in energy. Better prediction should make for better-run markets. But at the same time, technology cannot change everything — and the most consequential questions that technology will need to answer will be the energy industry’s fundamental questions, not its own.