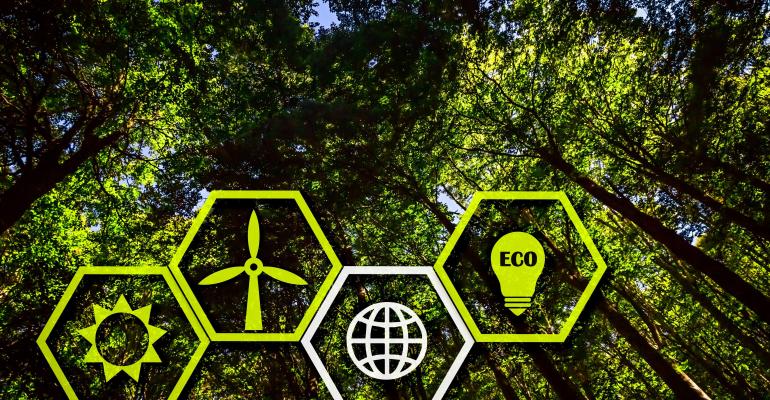 ‘Hating ESG’: Advocates Are Looking to Replace the Label

(Bloomberg) --A number of sustainable investing champions say it’s time for the “ESG” label to be shelved and replaced by something less likely to draw attacks from both the political right and left.
Robert Eccles, a professor who’s spent the past 12 years researching sustainability at Harvard Business School and now University of Oxford’s Said Business School, says the term “just doesn’t have value anymore. Let’s change the conversation.”

“I’m happy to not use the term ESG,” he said in an interview, referring to environmental, social and corporate governance issues. “People are so invested now in hating ESG for reasons that don’t really have much to do with ESG.”

Related: Whitepaper: Toward a Framework For Data Center Sustainability

ESG has this year become the subject of intense debate. As an acronym, it’s somehow morphed into a lightning rod for conservatives in the US, who use it to fire up attendees at Republican rallies. Florida Governor Ron DeSantis – a potential 2024 presidential candidate – wooed voters last month with a pledge to “protect” them from the ESG movement, which he claims threatens their economic freedom by putting “social causes” ahead of “the will of the people.”

Some former sustainable-investing executives have characterized ESG as little more than a glorified marketing exercise. Others have slammed it for appearing to have failed a number of litmus tests -- greenhouse gas emissions continue to rise, along with income inequality. Meanwhile, the finance industry has created a multitrillion dollar movement around ESG.

“It’s time for the industry to explain what ESG means and what it doesn’t mean, to maintain its credibility,” she said. Samuelrich, whose Boston-based firm oversees about $1 billion, says ESG is about using relevant material factors to measure how a company handles risks. “It isn’t ‘sustainable,’ ‘green’ or ‘making an impact.”’

Meanwhile, ESG continues to take up an ever bigger chunk of financial markets. McKinsey & Co. estimates that more than 90% of S&P 500 companies now publish ESG reports. And according to Bloomberg Intelligence, ESG will this year exceed $40 trillion worth of assets. The amount allocated to sustainable investment funds reached around $2.5 trillion at end of June, research firm Morningstar Inc. says. Such figures suggest ESG is too entrenched to simply switch off.

ESG’s defenders argue it’s still a fledgling movement and point out that regulations are already kicking in to fix obvious weaknesses. Sasja Beslik, a sustainable finance veteran who’s now the chief investment officer at NextGen ESG, says detractors “are simply too late to the party.”

“Regulation has in one way institutionalized ESG as a core element of responsibility for the financial industry,” he said. And though “there’s a lot of greenwashing for the moment,” it’s already clear that ESG regulations have “completely changed the game,” Beslik said.

ESG regulations are in many cases still being written. But once finalized, they should help fund managers and their clients identify and measure risks and opportunities -- such as how a hotter planet will affect industries like farming and insurance, how strikes will impact everything from aviation to garbage collection, and how dark secrets buried in a company’s supply chains can suddenly derail its fortunes. Without measuring such ESG exposures, companies and their investors may face considerable losses.

Europe will soon require close to 50,000 companies to disclose not just the ESG risks they face, but also the environmental and societal impact they have on their surroundings. Asset managers use that regulated information to shape their portfolios.

In the US, the Securities and Exchange Commission is responding to the reality of an overheating planet by asking corporations to report greenhouse gas emissions, including in some cases so-called Scope 3, the widest possible gauge of their carbon footprint. At a global level, there is fast emerging a standard for corporate sustainability reporting intended to make disclosures as consistent and transparent as financial reports are now, thanks to decades-old general accounting standards.

Sonali Siriwardena, partner and global head of ESG at Simmons & Simmons who advises some of the world’s biggest asset managers, says ESG “has not lost its purpose.”

“There are three different elements and you need to look at all three,” she said. “It’s about the long-term viability of the planet and the societies we live in” and ESG as an acronym “captures that.”

ESG was coined in 2004 by a United Nations team led by Paul Clements-Hunt, working with financial institutions. The big idea was that using ESG factors in financial analysis would help identify material risks, and opportunities to make money, from things like climate change. Doing so would also be compatible with fund managers’ fiduciary responsibilities.

Clements-Hunt, who is now a sustainability director at London law firm Mishcon de Reya, says the criticism of ESG comes from tensions created by the start of “a deeper shift in the global political economy.” After accusing the finance industry of using ESG as nothing more than a marketing gimmick, he urges caution on getting rid of the acronym altogether.

“ESG has become too deeply ingrained in the market system to be jettisoned easily for another three letter acronym,” he said. “We are at the very start of a massive adjustment, only just under way, as we steer a course toward regenerative capitalism. Whatever acronym we adopt the critical challenges will still be there.”

Oxford’s Eccles, who was also the founding chairman of the Sustainability Accounting Standards Board, defends the concept of ESG, even if he thinks the label has run its course.

Instead, he says he’s happy to talk about “material risk factors.”

“I know it’s a boring term, but it’s accurate,” he said. “We never have to say whether they’re an E, S or G issue. We can say we’re talking about carbon emissions or labor practices.”

In their report on the merits of ESG, analysts at McKinsey argue that while the acronym “may have lost some of its luster, its underlying proposition remains essential at the level of principle. Names will come and go...but we believe that the importance of the underlying ideas has not peaked.”