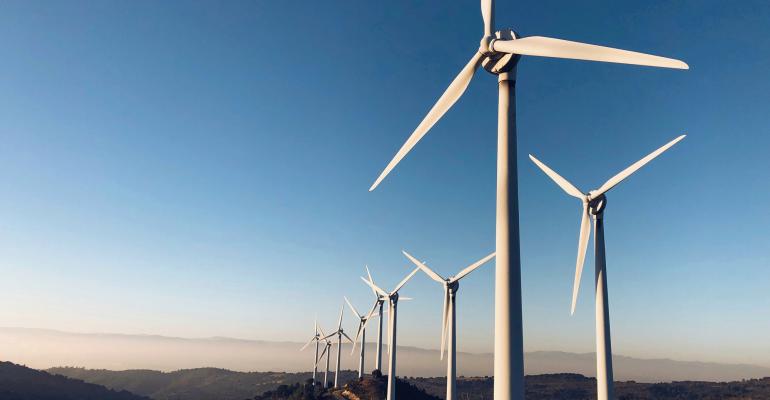 Google, Facebook and Microsoft are some of the world’s biggest supporters of clean energy. That’s not stopping the data center giants from pushing back on a huge wind and solar project.

(Bloomberg) --Google, Facebook and Microsoft Corp. — three of the world’s biggest corporate buyers of clean power — are sounding the alarm that a nearly $4 billion, Warren Buffett-backed renewable-energy project proposed in Iowa isn’t necessarily in the best interest of customers, including them.
If approved, it would be the largest complex of wind farms in the entire country when it comes online by the end of 2024, producing enough electricity for more than 700,000 homes. MidAmerican Energy, a utility owned by Buffett conglomerate Berkshire Hathaway Inc., has asked state regulators to approve terms including a guaranteed 11.25% rate of return before starting construction on a project it says will help in its efforts to trim carbon emissions by 75% compared to 2005 levels.

But the big-name tech giants that operate data centers in the state warn the project, dubbed Wind Prime, could drive up electricity costs. MidAmerican, they say, should consider alternatives. “We have concerns that the current Wind Prime proposal is not in the energy customers’ best interest,” Corina Standiford, a spokeswoman for Alphabet Inc.’s Google, said in an email.

The fight is an important one to watch because it demonstrates the increasing influence technology giants have on the energy transition. Tech companies have pushed utilities in other parts of the US to offer more clean energy options as they seek to clean up the sources of power for their energy-intensive operations. And since they buy so much power, the utilities often listen to them.

Tech companies fighting against or for green data centers?

“The scale that these companies are buying green power at is massive,” said Kyle Harrison, an analyst with BloombergNEF. As technology companies have become bigger and bigger consumers of renewable energy, they’ve also become more sensitive to its cost, he said.

Plus, companies pushing to decarbonize the grid are looking to be more strategic about when, how and where clean power sources are deployed. Google and Microsoft have committed to running their entire operations with carbon-free power round-the-clock by 2030. Facebook says its buys enough renewable energy to entirely power its operations around the globe.

MidAmerican, based in Des Moines, Iowa, proposed the project in January, laying out a sweeping plan for about 2,000 megawatts of wind power and 50 megawatts of solar generation. The company — which derives about 58% of its power in Iowa from wind and 42% from coal, nuclear and other sources — said Wind Prime is a key piece of the company’s goal to to reach net-zero emissions.

MidAmerican asked regulators to approve the project by the end of October so it could qualify for $1.8 billion in federal renewable energy credits.

Facebook, which also buys large amounts of power to run data centers in Iowa, referred to the proposed project in a joint regulatory filing with Google as an “exceedingly costly, massive increase in generation that MidAmerican has not demonstrated is necessary.” Last month, Microsoft filed its own petition with the Iowa Utilities Board saying it planned to join the tech-customer coalition.

Of course, the pushback from the tech giants doesn’t necessarily mean they won’t ultimately support it — or buy its power if it comes to fruition. Any multi-billion-dollar power-plant project is bound to trigger some back and forth, even heated debate, among customers, environmental and consumer groups and others. Regulators could approve MidAmerican’s proposed terms for the project, call for changes to them or reject it altogether.

Standiford, the Google spokeswoman, said the company is committed to run its Iowa data center — one of the company’s largest — on 100% carbon-free power and supports “new, cost-effective sources” of clean energy.

“We are actively working with regulators and MidAmerican to ensure the right investment for Iowa,” she said.