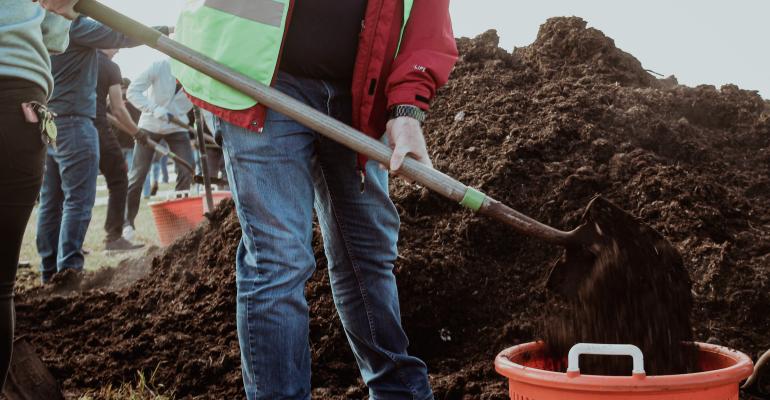 Last Thursday, volunteers from the data center community in northern Virginia gathered to support some of the area’s vital habitants: bees.

The bees, and other pollinators such as butterflies, will increase the yield of JK Community Farm’s operations by 20,000 pounds per year. That extra food goes to feed families facing food insecurity in Loudoun County, Kuhn said. The new raised beds planted by data center industry volunteers will produce 1,000 meals per year, according to Loudoun Now.

This was the first DC for Bees event held in the U.S. Host in Ireland, an organization promoting digital infrastructure coming from Ireland, runs the DC for Bees program and has held several events in Europe to help save Ireland’s declining bee population.

An estimated 70% of the world’s crops depend on bee pollination, says Host in Ireland on its site.

“The bees don't give a bollocks whether you work for Digital Realty or Equinix,” said Garry Connolly, president and founder of Host in Ireland, to Data Centre Magazine. “But, if you can get a gang of people together from all these data centre companies with a single sense of purpose, which is way bigger than the industry they're in itself, that can make a real impact.”

With 145 volunteers who constructed and filled the raised beds, along with $18,000 in donations, Kuhn is optimistic about the event’s success. “It’s nice to see the data center community come together to help families facing food insecurity, the environment, and local pollinators,” Kuhn told Data Center Knowledge.

The money raised will go toward obtaining more raised beds to attract even more pollinators.

Stack Infrastructure hosts more than 200,000 bees on the roof of its Milan data center. CyrusOne installed bee hotels and bee-friendly landscaping at its Dublin data center campus. Equinix’s Dublin campus hosts pollinators as part of Host in Ireland’s Orchards in the Community program. In Vienna, NTT has a green roof area at its Vienna 1 data center facility.

Data centers have a positive impact during a time when the industry comes under fire for its carbon footprint. Bloomberg recently released a scathing report of the usage of renewable energy credits to obscure true environmental impact. The report mentioned several data center industry giants including Microsoft (Azure), Equinix, and Digital Realty.

Data centers again came under fire in recent weeks. Prince William County’s Digital Gateway to expand land use regulations to include data center development drew loud critics from the local community. The Prince William County Board of Supervisors voted 5 -2 in favor of the Digital Gateway project, which is on land that is said to be the burial ground of enslaved Africans and their descendants and the indigenous inhabitants of the area. The land is also adjacent to a Civil War-era battleground, Manassas National Battlefield Park, which is now part of the U.S. National Park Service.