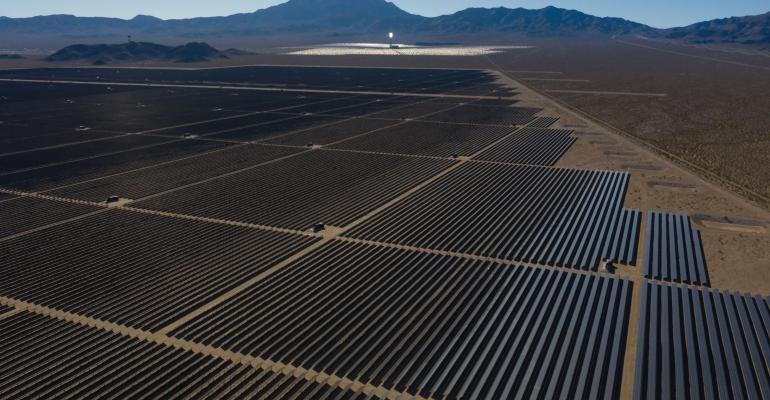 For a brief spell on a sunny afternoon, the state's renewable energy output met almost all of its electricity demand.

(Bloomberg) -- On the last day of April, California hit a milestone: For a brief spell during a sunny Saturday afternoon, renewable sources met 99.87% of electricity demand. Power systems outside the U.S. have reached this target before (Denmark with wind power and South Australia with solar alone last year). But California’s main grid, which serves 80% of the state, is far bigger than those examples. 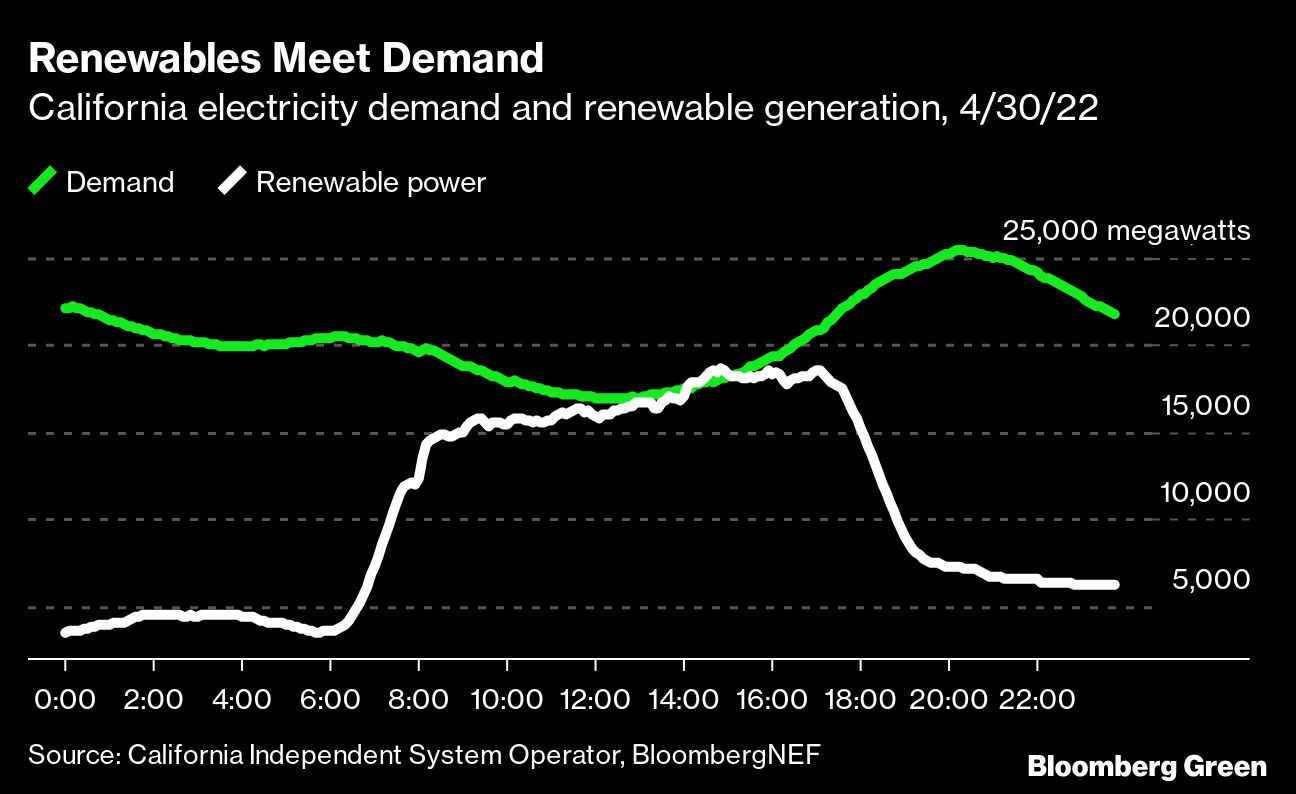 Related: HostDime Data Center in Northern Brazil Will Be Powered by Its Own Solar Farm

Last year, I described South Australia as a glimpse of the power industry’s future. We should think of California the same way but on a much larger scale. Its recent milestone points to a future full of zero-carbon power, with a great deal of variability; there will be new technologies and business models as well as room for further innovation.

The chart above doesn’t offer a big enough view of this future. There are more than two lines in the state power system, so to speak, and there is more going on than just renewable generation matching grid demand.

As well as wind and solar, California’s power system draws on natural gas, large hydropower plants, nuclear plants, electricity imported from neighboring states and batteries, which charge and discharge to maintain system stability. All of these technologies work in harmony to ensure the supply of electricity meets demand and that it is as reliable and low-emission as possible.

Now, if we zoom in on just wind, solar and batteries, the interplay among these three resources becomes clear. Batteries charge at night when demand is low and wind power is available; they discharge back to the grid as wind tapers, before solar begins ramping up. Then they charge throughout the sunny midday and discharge again as solar generation quickly falls off. Batteries play an integral role in maintaining grid stability.

However—and this is a big “however”—California’s battery capacity is not enough to absorb every wind and solar electron the state is capable of producing. In the same hour last week that renewables hit 99.87% of demand, more than 2,900 megawatts of solar energy were “curtailed,” meaning that output was deliberately reduced in order to balance the grid.

Curtailment is not a new function for the state’s grid operator, but it is used more and more frequently. Since 2014, the California Independent System Operator has curtailed more wind and solar power each year than in previous ones, following a seasonal pattern peaking in late spring. March 2022 set an all-time record, with curtailment that one month exceeding all of 2018. 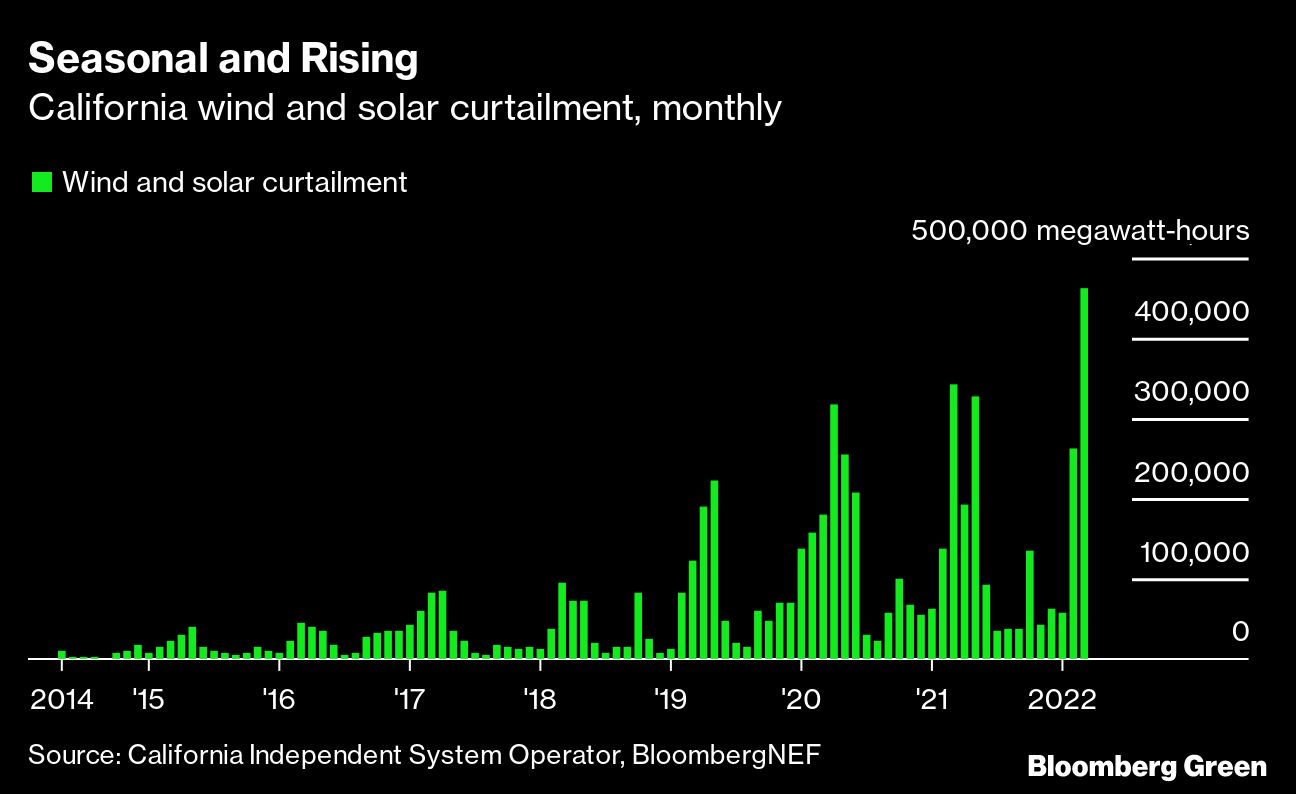 Curtailment is not a problem per se. In one sense it is a sign of a system that is properly functioning. But it is also a missed opportunity, at minimum. The electrons that are being curtailed, which have zero emissions and zero marginal cost, should ideally be flowing to companies and processes that can use them productively.

Decarbonizing California’s power system will require more batteries to maintain reliability. It will also require more of … everything, really. The state will need to ramp up clean power generation, and perhaps, as governor Gavin Newsom suggests, to keep its nuclear power online for longer. And in the near term, it will require more curtailment.

Ingenuity and invention are in order. As BloombergNEF highlighted in its latest Pioneers competition, there are technologies emerging for new and improved ways to produce net-zero power, to store energy for a long duration and to bolster the strength of the grid. These include small-scale nuclear reactors, advances in electric-vehicle charging and new software for grid operations.

Finally, it will require imagination to figure out what to do with excess energy. There are many more options than mining bitcoin—from creating hydrogen to running data centers to powering zero-carbon steel and aluminum production. The future of deeply decarbonized grids will combine technologies designed to generate round-the-clock, zero-emissions power with others that store power for weeks, make the grid run more flexibly, and soak up electrons as available.

We don’t know all of the technologies that will absorb extra electrons. But we don’t have to yet. That’s the job of inventors, entrepreneurs, and founders who look at tomorrow’s grid and see not just problems to solve, but value to be created.