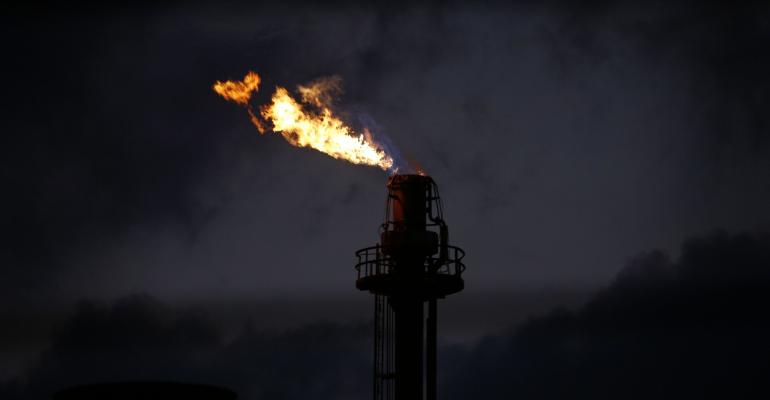 Microsoft, Amazon and the other cloud-services companies are increasingly responsible for the computing horsepower behind the oil giants’ efforts to find and extract more oil and natural gas; an awkward look for companies that have pledged to cut their own emissions.

There are other, quieter beneficiaries: Microsoft Corp., Amazon.com Inc. and the other cloud-services companies that are increasingly responsible for the computing horsepower behind the oil giants’ efforts to find and extract more oil and natural gas.

Among other things, Microsoft is making it possible for Exxon to analyze reams of oil field data. Amazon is helping drillers run simulations to maximize how much oil they can pump from existing wells.

It’s an awkward look for companies that have pledged to cut their own emissions. Microsoft has vowed to remove more carbon from the atmosphere than it emits by 2030, while Amazon has committed to eliminating greenhouse gases from its operations by 2040.

Both companies justify their oil industry contracts by pledging to accelerate a transition from dirty oil to sources that emit little or no carbon dioxide. And each is quick to provide examples of how they’re helping the oil industry move to a greener future. Microsoft and Chevron are working on a project to convert agricultural waste into fuel; Amazon Web Services software helps Marathon Petroleum Corp. identify and stamp out methane leaks. At the same time, Microsoft and Amazon say making oil companies more efficient is part of their sustainability work, helping their clients avoid unnecessary emissions, including those associated with antiquated data centers and older, error-prone software. 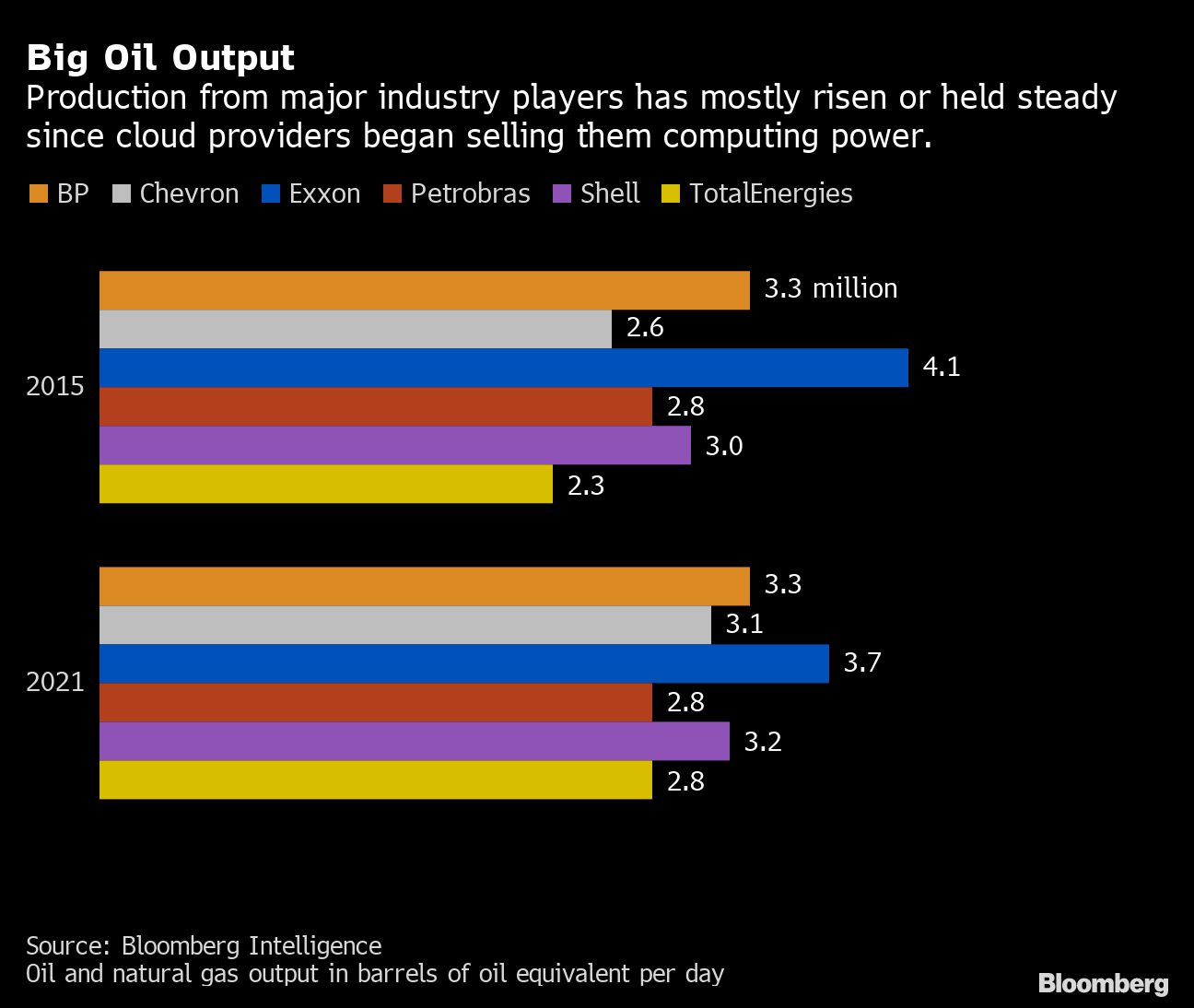 But neither company provided evidence that these projects are succeeding, or that they offset the environmental damage caused by increased oil and gas production from their biggest clients. AWS energy chief Arno van den Haak said his company is helping oil industry customers meet emissions reduction targets but didn’t have any figures to back up that assertion. “There’s not a single solution or a single goal,” he said. A Microsoft spokesperson said the company doesn’t have access to customer data but that energy partners have “shared some achievements that we’ve been proud to have taken part in.”

Such pronouncements infuriate critics who say the cloud providers’ oil industry contracts are prolonging the fossil-fuel age, tarnishing their green credentials and risking climate catastrophe. David Carter, an engineer who quit Microsoft last year partly because the company continued to work with the oil industry, argues that “if you do anything more efficiently, it gets done more.” Rob Day, a co-founder of Spring Lane Capital, a sustainability focused private-equity firm, credits the cloud providers for massive investments in solar and wind projects to power their operations. “On the flip side,” he said, “it’s not good enough. They’re making oil and gas drilling operations more profitable. Full stop.”

The criticism hasn’t prompted Microsoft and Amazon to pull back from the oil sector, but Alphabet Inc.’s Google, the third-ranked cloud player, seems to have been slowed down by employee activism.

The tech giants began courting oil companies several years ago, eager for business from a lucrative but technologically backward industry. At first, Amazon, Microsoft and Google struggled to sell the benefits of their mammoth computing power. Oil executives were leery of putting data on the cloud and potentially exposing valuable trade secrets such as well-test data.

But the sector was rife with inefficiencies. Darryl Willis, Microsoft’s vice president for energy, estimates that 90% of the geological and operational information oil and gas companies collected was going unused, sitting dormant in spreadsheets or files. Meanwhile, the mathematical models used for decades to assess how much oil a given well can produce were generating little more than educated guesses.

“Ninety-nine percent of what goes into these models is fiction,” said Jonathan Carter, who ran technology for the exploration unit of EON SE, the European energy firm, from 2012 to 2016. “It’s the dirty little secret we shove under the carpet in the oil industry because we make so much money.”

If there is one thing cloud providers do well, it’s crunch massive amounts of data fast. Carter, who now teaches uncertainty and risk quantification at Coventry University, says that before EON started working with AWS, it took the energy company weeks to conduct a few dozen simulations on an oil reservoir. Using AWS software, he says, EON could run 60,000 simulations in a matter of days, helping the company more accurately pinpoint where to drill. (EON says it has since divested its oil and gas exploration business and is investing in “climate-friendly customer solutions.”)

Cloud tools can help model and minimize how much carbon drillers generate, said Rajeev Sonthalia, a president for oil services company Schlumberger Ltd. But that same data-crunching tech is also useful in trimming the time it takes to get oil and natural gas to market. “As long as you keep cutting the cost of production, you access more barrels,” Sonthalia said. “It becomes a growth vehicle.”

Chevron has purchased as many as 400 HoloLens headsets from Microsoft and regularly uses the augmented-reality technology for a variety of tasks, including site surveys and safety assessments. The Remote Assist program lets office-based experts guide on-site workers through inspections, repair jobs and more. In investor reports, Chevron has said it helped design versions of the HoloLens headsets. In a statement, the company said that, among other benefits, its digital investment strategy will improve reliability and lead to “higher returns and lower carbon.” 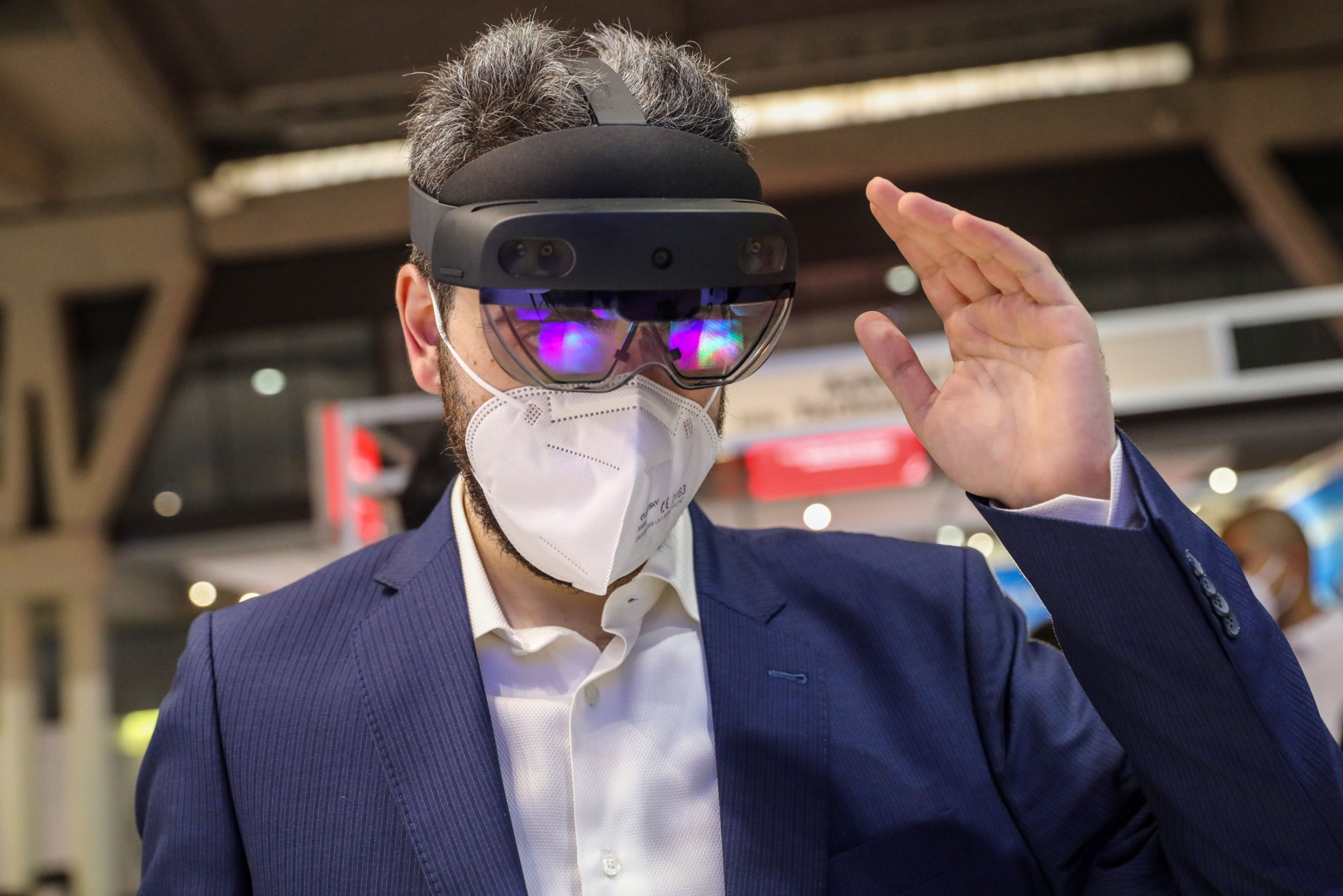 Halliburton Co. and Woodside Energy Group Ltd. are among several oil companies using AWS server farms to sift through troves of seismic data that would have been unaffordable if using mainframe computers, enabling them to map out potential oil and gas finds. Microsoft engineers collaborated on the opening of a Chevron project in Kazakhstan’s Tengiz oil field. One software engineer sent to the site recalled working on complex research tasks, such as computer vision models for 3D maps of the terrain. The engineer, who requested anonymity to discuss a private matter, considered Microsoft’s vows to push the energy industry toward sustainability as “just marketing-speak.”

Peter Bernard, who runs Datagration Solutions Inc., spends his days helping oil drillers upload and manage data on servers operated by Microsoft and Amazon. He says drillers see the cloud as a way to modernize their operations and survive boom-bust undulations. “They make a lot of money from our industry,” Bernard said of the cloud-service companies. “They’re going to continue to make a whole lot of money from our industry. But it’s not popular to talk about.”

Nowhere is that more true than inside the cloud companies themselves. Microsoft staff have long objected to their employer's oil and gas deals—even passing around figures showing that the extra production enabled by the company at Chevron’s Kazakhstan project increased emissions to 5000% of Microsoft's pledged carbon removal targets. A Microsoft representative didn’t comment on the project but said the company has outlined a strategy to move partners to net-zero emissions. Amazon employees also have protested AWS’s contracts with oil companies.

Microsoft’s Willis says the notion that the oil industry can quickly transition from oil to cleaner forms of energy is naive. “We don’t have the luxury of turning off one and turning on the other,” he says. “Energy is a thing that people love to hate, but no one is willing to live without.” Willis also says sharper machine analysis could better predict the best places to drill, removing the need to wastefully plunge into the earth. “If you didn’t have to drill those wells, that’s less emissions,” he said. “So it’s a big opportunity to help the industry.”

Still, optics are optics, and Microsoft and Amazon have both changed how they describe their work with the oil industry. AWS has removed blurbs about “digital oil fields” and drawings of derricks from its website, swapping in bromides about clean energy and an e-book titled, “Pathways and Principles for Energy Transformation.” Microsoft’s promotional materials have ditched pictures of oil fields for windmills.

After its own employee backlash, Google in 2020 pledged to stop selling machine learning tools for oil exploration—effectively ceding the sector to its rivals. Google is “quite vocally staying away from oil and gas,” Schlumberger’s Sonthalia said.

But he believes Amazon and Microsoft will deepen their relationship with the industry and estimates that spending on cloud services will rise to as much as 75% of oil company IT budgets in five years’ time, up from about 10% to 15% now. Next month, Schlumberger plans to host a Digital Forum in Luzern, Switzerland, devoted to the ways tech can “deliver high performance and sustainability in energy.” One session will focus on the latest oil-field production technology. Microsoft Chief Executive Officer Satya Nadella is a keynote speaker.