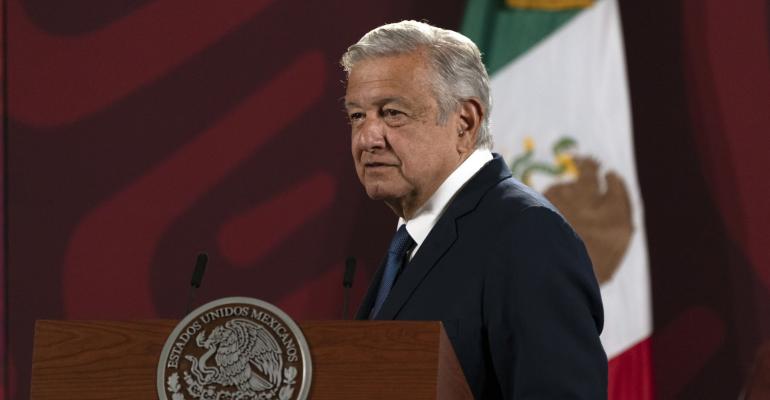 AMLO to Ask Biden for Energy, Semiconductor Support at Summit

Mexico wants US help to secure funding from development banks for an ambitious plan to build several state-owned solar parks in border state Sonora, said the official, who asked not to be identified while discussing plans that aren’t public. Lopez Obrador, known as AMLO, will also look to discuss selling Mexican clean energy north of the border, especially in California, the person said.

Mexico will also pitch working together to attract semiconductor firms to North America, the official said. Lopez Obrador’s administration hopes to persuade the US to jointly approach companies that are looking to relocate to the region with the suggestion that a new factory built in a state like Arizona could by supplied with some parts and processes developed in Mexico, the person said.

The talks will happen on the sidelines of a “Three Amigos” summit held by Lopez Obrador, Biden and Canada’s Justin Trudeau on Monday and Tuesday, where the leaders will discuss topics including climate change, regional competitiveness, migration, diversity and security.

Lopez Obrador and Trudeau will meet separately Wednesday, with Mexico aiming for a strategic relaunch of the relationship, built on strong Canadian investment in the country last year and an energy infrastructure partnership announced between Mexico’s state utility and Canada’s TC Energy Corp., the official said.

Mexico doesn’t expect to discuss new measures on migration, after announcing a new deal with the US on Thursday, the official said. Biden plans to visit the southwest border in El Paso, Texas, on Sunday, before traveling to Mexico City.

Trade disputes between the three countries will likely be mentioned but not discussed in detail, the person said.