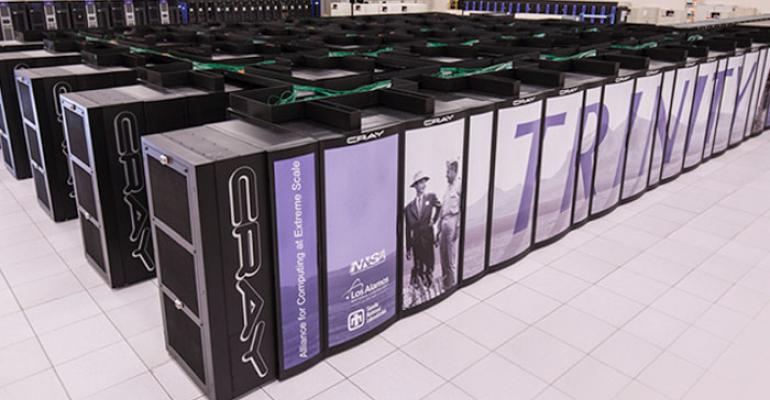 What HPE’s Acquisition of Cray Means for the Supercomputer Industry

HPE will integrate Cray’s supercomputer technology into its product portfolio and build an HPC-as-a-service and AI cloud services on HPE GreenLake.

With HPE’s acquisition of Cray, the strong just got stronger.

HPE’s planned purchase of Cray for $1.3 billion, announced on May 17, is a good, strategic move because it gives the company access to Cray’s innovative, high-end high performance computing technology and expands its access to customers in government and meteorological organizations, as well as the academic, manufacturing, and oil and gas markets, Gartner analyst Chirag Dekate told Data Center Knowledge.

“It’s synergistic. Because of this acquisition, HPE has access to one of the only differentiated stacks in the market and can now compete more aggressively in those five vertical markets,” said Dekate, a Gartner senior director who focuses on AI infrastructure, HPC and emerging compute technologies.

HPE is already the HPC server market leader, but by adding Cray into the fold, HPE strengthens its position against its two chief rivals, Dell EMC and IBM, Steve Conway, vice president of Hyperion Research, told us. The overall market for HPC hardware, software, and services is lucrative and expected to grow from $28 billion in revenue in 2018 to $39 billion by 2023.

In 2018, HPE ranked first in HPC server sales with 34.8% market share, followed by Dell EMC with 20.8% and IBM with 7.1% of the market. All other HPC players, including Lenovo, Atos, Inspur, and Sugon, have single-digit market share, including Cray with 2.3%.

“HPE starts in a strong position, but it has never been in the high-end of the market for the biggest, most powerful computers, and now Cray gets HPE into the high-end,” Conway said.

In its May 17 announcement, HPE executives said it will integrate Cray’s technology into its existing HPC portfolio, which includes HPE Apollo and SGI hardware. It also plans to build a future HPC-as-a-service, and artificial intelligence and machine learning cloud services, on HPE GreenLake.

With the acquisition, HPE will get Cray’s current generation XC and CS supercomputers and the next-generation Shasta supercomputer that features a new high-speed interconnect, code-named Slingshot. Cray’s products also include high-performance storage, a full HPC system software stack, and data analytics and AI solutions that are fully integrated.

Most HPC hardware vendors today sell commoditized cluster stacks comprising of Infiniband or Ethernet-based networking, said Gartner’s Dekate. But IBM and HPE are the only HPC vendors that can differentiate themselves: IBM with its Power9 processors, and now HPE with Cray’s Slingshot and ClusterStor HPC storage hardware.

“Cray gives HPE a unique, technological edge,” he said. “Slingshot provides HPE with an extremely high-bandwidth network for HPC and AI workloads. It enables new network topologies that are required for extreme-scale HPC and AI.”

“As a result, HPE now boasts a portfolio that can address HPC requirements of diverse scales, from value-optimized entry-level systems to extreme-scale HPC platforms,” Dekate said.

Why Cray Made the Deal

Cray was successful as an independent company, but under HPE it will no longer have to to worry about the cyclical nature of sales to the federal government, said Dekate. In 2018 the company reported total revenue of $456 million, but suffered a net loss of $72 million, and the last time the company was profitable was in 2016, when it reported revenue of $629.8 million and a net income of $10.6 million.

“Cray was impressively successful for a small company, but it’s more difficult as a standalone company against the bigger companies,” Hyperion's Conway said.

The company was also trying to make further inroads into the enterprise market, and HPE has experience and enterprise customers at a time when many businesses are recognizing the need to invest in HPC for AI, data analytics, and other business operations, such as marketing and ERP.

Will HPE-Cray Pairing Be Successful?

IDC Research Director Peter Rutten told Data Center Knowledge that the acquisition is a positive move for HPE, whose customers will benefit because the HPC market (which IDC calls Massively Parallel Computing) is poised to take off, particularly as enterprises increasingly adopt HPC.

“For a lot of enterprises this is a new type of compute, but they have to start embracing it because workloads increasingly require MPC," he explained. "You can’t compete anymore without doing AI, big data analytics, and increasingly, simulation and modeling. They don’t necessarily want to purchase the hardware and put all that together. It’s complex. So if you can get it with a cloud-like consumption model as HPE GreenLake offers, then you turn it into an OpEx investment.”

HPE’s deal to acquire Cray is expected to close during the first quarter of HPE’s 2020 fiscal year. Conway said that as with any merger or acquisition, HPE’s success will depend on how well it integrates Cray management, its 1,300 employees, and its technology, and pointed to HPE's purchase of Silicon Graphics in 2016.

“HPE’s treatment of SGI is a good sign they know how to do this and they know how to integrate,” he said. “They took some former SGI people and made them high-level executives for HPC at HPE, and today they are still selling SGI products.”