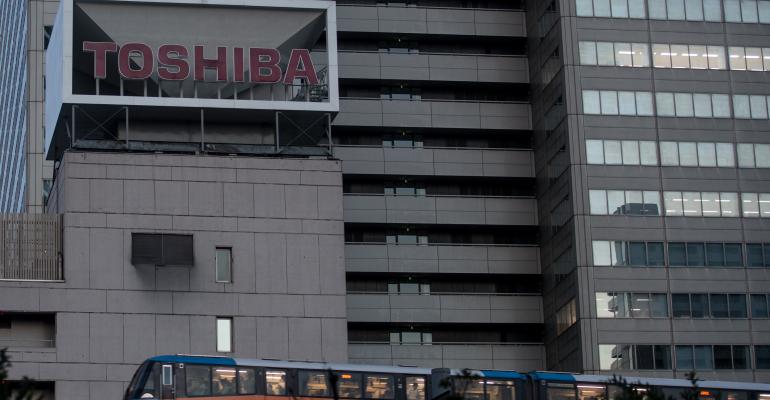 “You can just plug it into a server and run it at room temperature.”

Japan’s Toshiba Corp. says it has the technology to make such rapid-fire calculations a reality -- not quite quantum computing, but perhaps the next best thing. The claim is being met with a mix of intrigue and skepticism at financial firms in Tokyo and around the world.

Toshiba’s “Simulated Bifurcation Algorithm” is designed to harness the principles behind quantum computers without requiring the use of such machines, which currently have limited applications and can cost millions of dollars to build and keep near absolute zero temperature. Toshiba says its technology, which may also have uses outside finance, runs on PCs made from off-the-shelf components.

“You can just plug it into a server and run it at room temperature,” Kosuke Tatsumura, a senior research scientist at Toshiba’s Computer & Network Systems Laboratory, said in an interview. The Tokyo-based conglomerate, while best known for its consumer electronics and nuclear reactors, has long conducted research into advanced technologies.

Toshiba has said it needs a partner to adopt the algorithm for real-world use, and financial firms have taken notice as they grapple for an edge in markets increasingly dominated by machines. Banks, brokerages and asset managers have all been experimenting with quantum computing, although viable applications are generally considered to be some time away.

Why Quantum Computers Will Be Super Awesome, Someday: QuickTake

Toshiba said its system is capable of calculating arbitrage opportunities for currencies in microseconds. The company has hired financial professionals to work on the project and aims to complete a real-world trial by March 2021.

“Finance is the most familiar application,” Toshiba Chief Executive Officer Nobuaki Kurumatani said in an interview. “But there are so many uses. This is a technology with real potential.”

Toshiba’s algorithm seems to outperform rival approaches on mathematical benchmarks, but how it will perform on real-world problems is anyone’s guess. Access to the company’s backtesting in currency trading and portfolio optimization isn’t publicly available and adopting the technology to a new problem would likely require rebuilding the algorithm from scratch.

“There is a lot of talk about applications of quantum computing in finance, but it’s not very clear where it would be all that necessary,” said Takanobu Mizuta, a fund manager and senior researcher at Sparx Group Co. Optimizing a portfolio is not something that needs to be done in microseconds and calculations involved in high-frequency trading, where speed counts, are not very complicated, Mizuta said.

Toshiba may choose to use the algorithm for areas outside finance. Other applications could include things like plotting complex shipping and logistics routes and developing new drugs with molecular precision, according to the company.

The idea first arose in 2015, when senior research scientist Hayato Goto was exploring how the qualities of some complex systems can suddenly change with additional input, a phenomenon he describes as bifurcation. But it took him two years, he said, to realize the discovery could be used to craft algorithms that can efficiently sift through a huge number of possibilities -- like a quantum computer without the onerous requirements to run one.

Goto partnered with Tatsumura, whose semiconductor expertise was crucial in making the calculations work on multiple processors in parallel.

“We will see some ideas for specific applications of quantum computing coming out over the next five years,” said Masayuki Ohzeki, an associate professor at Tohoku University whose research focuses on the technology. “But real implementation will depend on when there is a good match between improvement in performance and techniques that simplify the calculations.”

Toshiba revealed its Simulated Bifurcation Algorithm in April, initially garnering little attention outside the scientific community. In October, the company announced that its model had identified potential arbitrage opportunities in currency trading in just 30 microseconds -- fast enough, it claimed, to give it a 90% chance of making profitable trades. That triggered inquiries from financial institutions in Japan and abroad, Toshiba said.

Investment banks are already eyeing quantum computing as an opportunity and a threat. Goldman Sachs Group Inc. has been building an in-house research team and late last year joined forces with startup WC Ware to speed up the search for a “quantum advantage.” Japan’s Nomura Holdings Inc. has partnered with Ohzeki’s lab at Tohoku University to explore applications in asset management using a machine made by Canada’s D-Wave Systems Inc.

“Right now, what you can do with it is still hypothetical,” said Kazuyuki Takeda, a general manager at Mizuho-DL Financial Technology Co., a research arm of one of Japan’s biggest financial groups. “It will take quite a bit of time before we have practical uses of quantum computing. At least 10 years or so.”

Alphabet Inc.’s Google claimed in October that its quantum computer -- built on a custom processor with bespoke cryogenic cooling -- could perform a task in 200 seconds that would take today’s fastest supercomputer 10,000 years. Researchers at IBM have countered, saying that their supercomputer can match Google’s Sycamore processor “in a matter of days.” But that cluster of machines occupies an area the size of two basketball courts inside the Oak Ridge National Laboratory. In either case, the cost of quantum-like computational capability appears to still be prohibitively high for most applications.

In the meantime, Toshiba is hoping it will succeed in commercializing its new algorithms -- whether in finance or elsewhere -- by delivering a computational edge with existing technology.

“We give ourselves about a one-year lead for the stuff that we release publicly,” Goto said. “The more cutting-edge knowledge we have internally gives us confidence that we won’t be easily caught up with.”