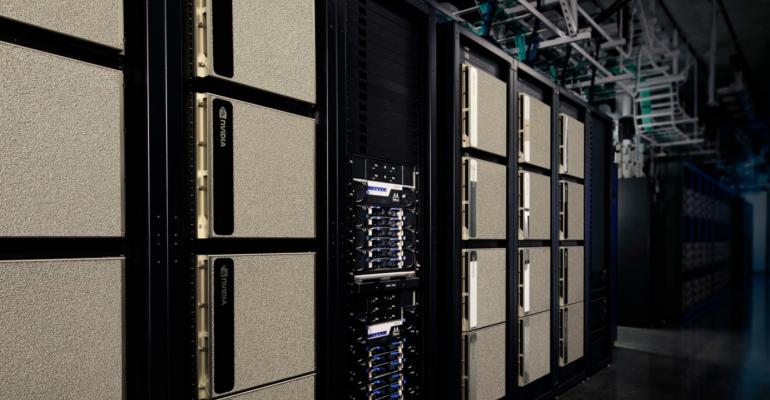 Kicking off a new challenge to Intel’s dominance in large-scale computing, Nvidia announced that all the software used to accelerate processing using its GPUs will soon support Arm chips. The GPU maker made the announcement as the group of academics that puts out the biannual Top500 list of the world’s fastest supercomputers released its latest ranking.

The stack of software Nvidia is making available to the “ecosystem” of companies and organizations building Arm hardware and writing software for the chip architecture the British company Arm Holdings licenses to others is called CUDA. The libraries, frameworks, and developer tools are used to accelerate “more than 600 HPC applications and all AI frameworks,” according to Nvidia, which said the entire stack will support Arm by the end of the year.

The company has been working on this for two years, Ian Buck, VP and general manager of the Tesla Data Center Business at Nvidia, said on a call with reporters last week. “We’re almost there,” he said.

Many powerful companies have been working to create a viable alternative to Intel’s x86 architecture in mainstream enterprise computing. Nvidia’s expanded support for Arm now fuels a challenge to Intel’s dominance in the niche high-performance computing, or HPC, market.

Intel’s chips are in 95.6 percent of all systems on the latest Top500 list. Seven systems – including the two fastest ones – have IBM Power CPUs, three have AMD chips, and one is powered by Arm.

Nvidia dominates the fastest supercomputers that use accelerator processors to free up CPU power. Of 133 such systems on Top500, 125 use Nvidia GPUs. Its new support for Arm opens the door for more GPU-accelerated Arm supercomputers to replace Intel-powered systems on the list.

A big reason Nvidia sees a bright future for Arm in the HPC market is the architecture’s energy efficiency. Used primarily in mobile devices, Arm chips are said to be economical in the way they use energy to compute. As the ability of x86 chips to increase the amount of processing power per watt with each new generation starts to diminish, the broader computing industryis starting to look at alternative CPU architectures to ensure that computing speeds and energy efficiency continue improving.

“Arm has been an interesting conversation in HPC, and data center more broadly,” Buck said. “Certainly, we’ve seen a lot of interest in Arm, but recently there’s been a significant uptick.”

Arm is the likely chip architecture of choice for the European Processor Initiative, which was started recently by a consortium of European organizations to develop an exascale supercomputer mainly out of European components. “It’s clear that Arm has a bright future in Europe,” Buck said.

Arm is also the CPU of choice for exascale development in Japan, he added.

The Arm system on the Top500 list is Astra, the Hewlett Packard Enterprise-built supercomputer at the US Department of Energy’s Sandia National Laboratories in Livermore, California. Capable of 1.76 petaflops, it’s number 156 on the list.

‘A Petaflop Club for Supercomputers’

The latest, 53rd, edition of Top500 marks the first time all 500 systems on the list are capable of at least 1 petaflop, or one quadrillion floating point operations per second. The slowest system on the list, the Internet Company N D2 system built by Lenovo for China’s Network Company, clocked in at 1.022 petaflops, making Top500 a “petaflop club for supercomputers,” according to the organization.

The Sunway TaihuLight at the National Supercomputing Center in Wuxi, China, remained in the third position with 93.0 petaflops, while Tianhe-2A, also known as Milky Way-2A, held on to the fourth place. The former is powered by Chinese Sunway chips and the latter by Intel Xeon processors.

The fifth supercomputer on the list is 23.5-petaflops Frontera, the only new system in the top 10. It’s an Intel-powered Dell system installed at the University of Texas’s Texas Advanced Computing Center.

Here are the details of the world’s 10 fastest supercomputers, according to the June 2019 Top500 list (full list here): 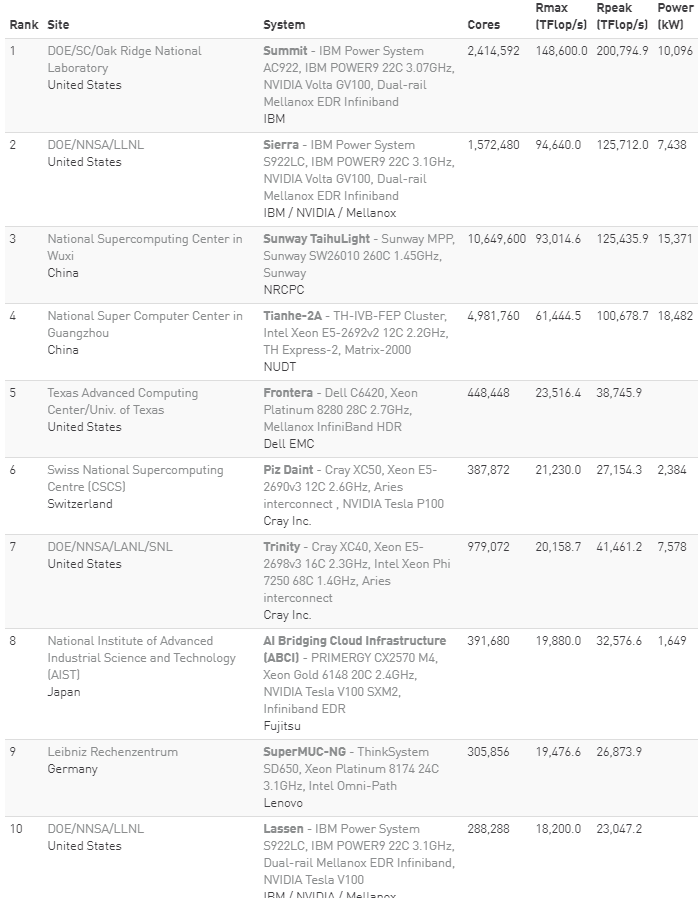