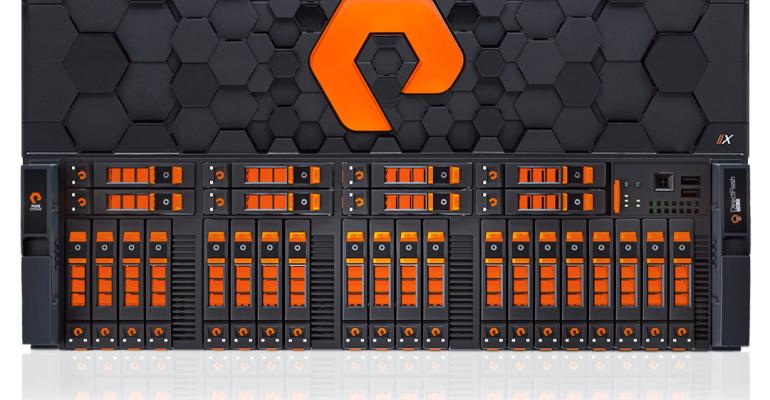 The pioneer in all-flash storage arrays has introduced a new generation of data center storage gear that supports the NVMe protocol, which significantly speeds up application performance.

Pure Storage, based in Mountain View, California, also rolled out a new pay-as-you-go pricing model for its on-premises storage gear and released a new entry-level AI converged-infrastructure appliance that makes it faster and easier for organizations to deploy data analytics.

The company, which competes against the likes of Dell EMC, Hitachi, IBM, Hewlett Packard Enterprise, and NetApp in the all-flash storage market, made the series of announcements at its Pure Accelerate conference in San Francisco Wednesday.

Historically, storage hardware has used the SATA and SAS protocols, but they are designed for disk storage and resulted in performance bottlenecks when used for flash storage, said Scott Sinclair, a senior analyst with Enterprise Strategy Group.  NVMe, however, eliminates those performance issues because it’s designed for Flash.

“This year and the next couple years will all be about NVMe. It’s a huge step forward,” Sinclair said. “It’s more than faster application performance. If you are an enterprise with tens of thousands of employees and run a lot of applications, it allows you to run a whole bunch of apps on the same infrastructure, which saves money. And if you are doing big database queries and looking for insight, something that may take four hours can maybe now take 30 minutes. So instead of running one query, you can run eight in that time and get more insight out of your data.”

“We believe with this fast networking that we can basically bring them into one big pool of shared storage,” Kixmoeller said.

Competing storage hardware vendors have all been racing to ship their NVMe products. But Pure executives say they have one big advantage over their rivals: pricing.

Kixmoeller said customers will not be charged a price premium for the new NVMe-based products. “Our goal is to not have a premium on NVMe,” he said. “At the same price a competitor might sell a last-generation Flash array, you can go with our NVMe products for the same cost. It becomes a no-brainer for customers to go all-in with NVMe.”

Pay As You Go Flash

Here’s how it works: Pure ships an IT organization a storage array to install on-premises. It requires a one-year contract and a modest capacity commitment, Kixmoeller said. The customer pays based on the amount of capacity they consume, charged per gigabyte. “It flexes up and down as you go,” he said.

Previously, in April, the two companies released AIRI, which stands for AI-Ready Infrastructure. It features compute power from the NVIDIA DGX-1 supercomputer, storage from Pure’s FlashBlade hardware, and networking switches from Arista Networks.

On Wednesday, Pure released the AIRI Mini. While the original AIRI is targeted at enterprises and hyperscale companies with large data science teams, the Mini is built for organizations that are just getting started with data analytics and have small data science teams, said Matt Burr, Pure’s general manager for FlashBlade.

The company also said that the AIRI and AIRI Mini are now available with Cisco Nexus 9000 Series switches.

Overall, Sinclair, of Enterprise Strategy, gave Pure Storage’s announcements a thumbs up. When the company initially entered the market, it wanted to provide the marketplace with all-flash storage and help drive costs down over time. It did that successfully, and now it’s doing it with the NVMe products, he said.

“It shows them continuing to be a leader in flash storage technology,” Sinclair said.

Furthermore, the AIRI Mini’s lower cost makes data analytics more accessible for companies who are just starting to test or implement it, while the pay-as-you-go model for Pure’s equipment allows organizations to take advantage of the popular cloud subscription model for on-premises equipment, he said.

“With the adoption of public cloud, more IT organizations and IT leaders have said, we would like to apply pay-by-consumption to on-premise infrastructure as well,” he said.