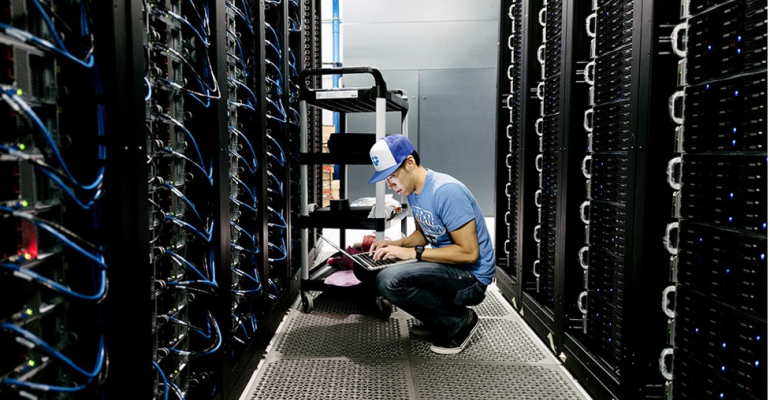 How Dropbox Re-architected Its Cloud to Use Higher-Density Storage

Dropbox is revamping its cloud storage infrastructure to take advantage of higher-capacity storage technology, which it expects will reduce its data center footprint and cut costs.

It took almost three years for the team to optimize hardware and redesign its software to make it possible, Rami Aljamal, Dropbox’s head of hardware, supply chain, and capacity engineering, said in an interview with Data Center Knowledge.

“It was a challenge, but we want to help others and show this is doable, that this is how we did it,” he said.

The company plans to open source the software it wrote to take advantage of this technology to help others use SMR drives as a primary storage medium in their data centers.

Dropbox, which migrated its users’ data from Amazon Web Services to its own in-house cloud infrastructure called Magic Pocket in 2016, has traditionally used perpendicular magnetic recording (PMR) hard drives, where data is stored on the disk randomly. SMR drives, in contrast, store data sequentially. They can store more data by overlapping tracks, much like a roofer installing shingles on a roof.

“It’s a new disk technology that gives us more space per disk, which is important,” Aljamal said.

The company, which previously deployed 8TB PMR drives, has started installing Western Digital’s 14TB Ultrastar Hs14 SMR drives. Dropbox is installing hundreds of petabytes of SMR drives, claiming that it’s the first company to test and deploy SMR technology at such large scale. SMR drives will make up 25 percent of Dropbox’s storage capacity by 2019 and will make up an even larger percentage in the coming years, Aljamal said.

“We are a fast-growing company that owns a lot of storage. It’s a lot more efficient, a lot more economical, and we can take that value back and invest it into our users with better products and more features,” he explained.

Dropbox’s infrastructure team also didn’t want to be tied to PMR technology, so they ensured that Magic Pocket will work with both PMR and SMR drives. “That flexibility into the supply chain is important,” Aljamal said.

Bringing SMR Up to Speed

SMR adoption has been limited, used mostly for archiving rather than primary storage. That’s because SMR drives have been managed by firmware sitting on the drives themselves, resulting in extremely slow write performance, he explained.

A PMR drive could write to disk at 100Mbps, while a drive-managed SMR drive would do the same at about 5Mbps to 10Mbps, because the data was written sequentially on overlapping tracks.

Writing to a drive-managed SMR disk is like replacing a single shingle in the middle of a roof, John Rydning, IDC’s research VP for hard disk drives and semiconductors, said. “You have to peel up a lot of shingles to change that shingle on the disk.”

Dropbox fixed this problem by managing SMR drives at the host level, optimizing its hardware and redesigning software that runs its internal cloud storage infrastructure.

For example, the engineers beefed up memory and CPUs and improved speeds on its networking equipment, according to a company blog post. They also wrote software and built a caching layer using solid state drives, or SSDs, to stage the writes before they are flushed to the SMR drives, Aljamal said.

“Having the writes managed by the firmware created a big performance implication, so we moved it up the stack in our software,” he said.

As a result, SMR speed is now equal to PMR speed, he said. “There is no performance compromise or reliability compromise.”

The software it wrote to manage reads and writes to SMR disks is what Dropbox plans to open source to help other cloud companies adopt SMR technology. Dropbox has talked to several other cloud companies, Aljamal said, and they have a lot of interest in learning about how it’s done it.

“The more adoption of this technology, the better it is for everyone,” he said. “We want everyone to use it and help push the industry forward through innovation.” Inside a Dropbox data center

Rydning, the IDC analyst, said Dropbox’s efforts to open source its software could speed SMR adoption, but it depends on how closely other companies’ software resembles Dropbox’s software.

“The question is how compatible is Dropbox’s design with what cloud service providers are using in their overall software stacks,” Rydning said. “Whatever other cloud providers have developed may or may not work. Some may look at this and say, ‘This is a godsend. This is great.’ Others may look at it and say, ‘It’s interesting, but it may not work for us.’”

Many cloud companies are working on solutions to eventually use host-managed SMR drives more broadly because they are adding storage capacity at a fast place, and the more capacity each hard drive has, the more they can store within a single data center’s footprint, Rydning said.

“It’s not just re-engineering the software. It’s also the design of the server and storage arrays. They all have to work in concert together to use SMR,” he said. “It is a good challenge, but I believe most cloud companies will get there because they have a good incentive to use SMR technology.”