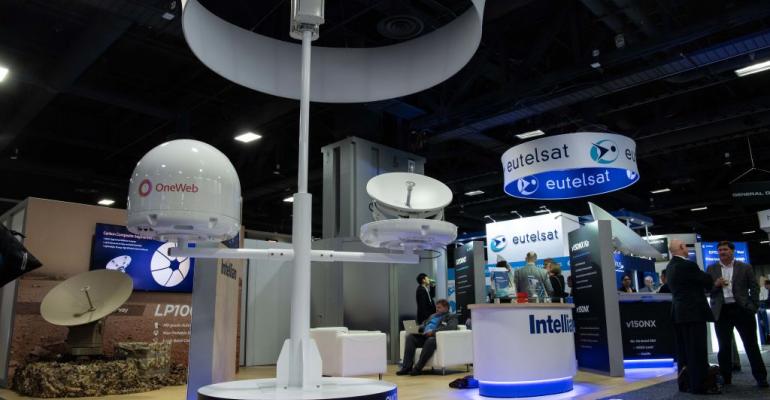 NICHOLAS KAMM/AFP/Getty Images
A ground antenna made by Intellian for the OneWeb space internet provider seen at Satellite2019 in Washington, DC.
Business>Startups

Gets six satellites broadcasting at the right frequencies for 90 days to meet UN's ‘use-it-or-lose-it’ spectrum conditions.

The startup backed by Softbank Corp. is racing against billionaires Elon Musk and Jeff Bezos to install constellations of small satellites so they can offer 4G-like broadband to places that are too costly to reach using terrestrial networks.

By getting six of the washing machine-sized satellites broadcasting at the right frequencies for 90 days, OneWeb has met ‘use-it-or-lose-it’ spectrum conditions set by the United Nations’ International Telecommunication Union, the company said by email.

Musk’s Space Exploration Technologies Corp. and Bezos’s Project Kuiper are likely to need the same spectrum. OneWeb says that being the first to file its claim and have it validated will mean signals from other operators must not interfere with its own, under rules that oblige latecomers to preserve the quality of services offered by an incumbent.

“That could mean a longer road to the finish line for others than it is for us,” said Ruth Pritchard-Kelly, OneWeb’s vice president of regulation.

An ITU spokeswoman said the Geneva-based body had not yet received frequency claims for the OneWeb or SpaceX projects.

OneWeb has raised $3.4 billion from shareholders including Softbank, Airbus SE, Richard Branson’s Virgin Corp. and Qualcomm Inc. and plans to launch about 30 of the satellites per month from December to create an initial constellation of 648. Because they are thousands of kilometers closer to Earth than traditional models, they promise much lower transmission delays than existing satellite broadband services.

Musk’s SpaceX is also moving fast, sending dozens of satellites into orbit for its Starlink project and preparing for more launches this year after winning U.S. government approval for about 12,000 satellites. Project Kuiper is yet to launch any of its satellites.