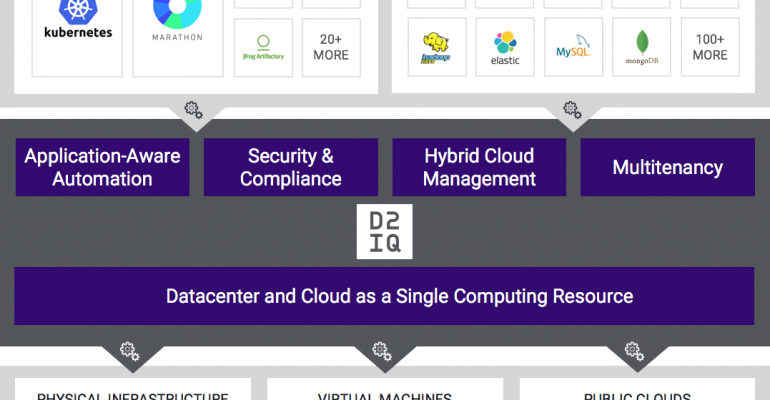 The open source company expands beyond its traditional core and into highly competitive waters.

The San Francisco-based startup Mesosphere no longer wants to be associated solely with Apache Mesos, the open source software project for managing server clusters upon which the company was built. It announced this week that it's changed its name to D2IQ and unveiled new technology, professional services, training, and support offerings for Kubernetes, as well as Cassandra, Kafka, Spark and more.

The name change is something of a late-in-the-game acknowledgement that Kubernetes has won in the cloud-native arena. While Mesos has capabilities that Kubernetes doesn't (it can run non-containerized stateful workloads, for example), today's DevOps-centered pipelines have standardized around containers and Kubernetes, making other container management tools and software deployment methods also-rans.

The company formerly known as Mesosphere had been trying to get aboard the crowded Kubernetes bandwagon for some time now. In March 2018 the company began offering Kubernetes fully integrated into its flagship Mesos-based DC/OS (Data Center Operating System) platform after offering it in beta for six months.

"Mesosphere doesn't represent the evolution of our strategy and the services we have offered our customers for some time," CEO Mike Fey said in a blog post explaining the change. "Thus, we felt the need to expand our identity. Even as we are significantly expanding our offerings for Kubernetes and other services such as Kafka, Jupyter and more, we are not walking away from 'Mesosphere' as a concept or a brand."

According to Fey, the jargonized new name means "Day 2 IQ," with Day 2 being a DevOps term that refers to the operations part of the software development lifecycle and with IQ equating to "smart."

D2IQ is holding onto the words "sphere" and "mesosphere" in its expanded product line, which centers around "solution spheres" that include technology, services, training, and support for "core technology practices," which so far consists of moves further into the realms of containers and Big Data. The company has introduced three "spheres" along with a promise that more were on the way.

The initial offerings are Ksphere, for Kubernetes deployments using Konvoy, which is D2IQ's implementation of Kubernetes; Datasphere, for building and maintaining data analytics, data science, and data-driven application environments at scale; and Mesosphere, which is where the company continues offering its traditional DC/OS-based solutions.

In addition, the company announced a "significant expansion" to other areas, including professional services and training.

"These include a robust suite of solutions to support an organization's cloud native initiatives regardless of whether they are in the initial scoping and planning stage or post-production support of their cloud native stack," the company said.

In other words, like everyone else in the space these days, Mesosphere/D2IQ wants to be your hybrid cloud enabling company.

D2IQ is moving into highly competitive waters on both of its new fronts: Kubernetes and Big Data.

The already crowded Kubernetes arena last week became much more competitive with IBM's wholesale adoption of the container application platform OpenShift and its big Kubernetes push in the wake of its takeover of Red Hat.

Companies in the Big Data space have been reeling from competition with the public cloud giants. Cloudera and Hortonworks recently merged under pressure from public cloud competition, and MapR was just purchased by HPE after putting itself on the auction block with warnings that it was in danger of shutting its doors.

Monday's announcement of D2IQ comes only six months after Fey took the CEO position, replacing co-founder Florian Leibert, who had been CEO since Mesosphere's founding in 2013. It also comes just three weeks after Mesosphere announced it had hired six new executives, primarily to bring depth in the areas of finance and marketing.