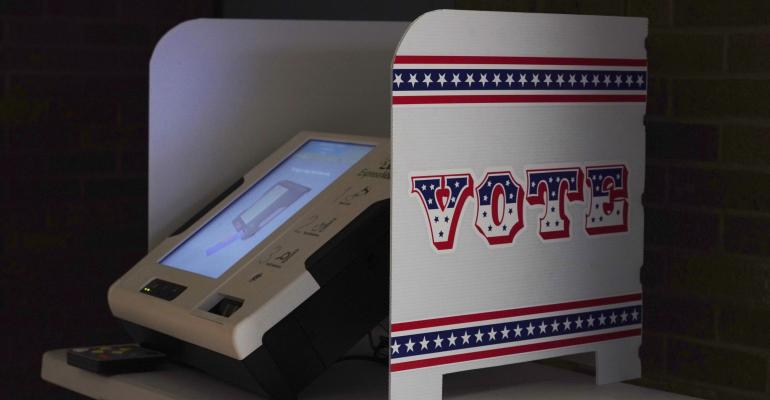 US Brings Back Cyber Team to Combat Possible Election Meddling

The effort comes amid warnings from U.S. officials that Russia could seek to sway voters during the midterms.

(Bloomberg) -- The U.S. has reassembled an election security team to safeguard the 2022 midterm vote, with officials citing fears that Russia could seek to conduct new influence operations aiming to undermine democracy.

“The band is already back together, it’s formed,” General Paul Nakasone, who leads the National Security Agency and U.S. Cyber Command, told a Vanderbilt University summit on modern conflict this week.

The election security team is comprised of military and civil personnel from both of Nakasone’s agencies, who will liaise with the FBI, the Cybersecurity and Infrastructure Security Agency and U.S. National Guard units at the local and state level, among others.

“We’re less than 200 days before our nation goes to vote for midterm elections, and I assure you that we are ready and we will be ready going forward,” he said.

The effort comes amid warnings from U.S. officials that Russia could seek to sway voters during the midterms, which are viewed as a critical referendum on the Biden administration. Pollsters predict the Democratic Party stands to lose seats in both the House, where it has a slim majority, and potentially in the Senate, where it is already neck-and-neck with the Republican Party.

An ongoing war in Ukraine has also fueled concerns of Russia waging retaliatory cyberattacks against the U.S. for imposing sanctions.

The U.S. first set up a Russia small group to protect the 2018 midterms in the wake of interference in the 2016 election, which included hacking and leaking Democratic Party emails and a social media campaign that favored then candidate Donald Trump’s election. The team was renamed the election security group in a bid to counter an expanded array of nation-state threats in time for the 2020 presidential vote.

China decided against influence operations in pursuit of stable relations with the U.S., according to the report.

The new election security group, which convened at the end of 2021, is jointly led by Brigadier General Victor Macias and NSA senior executive Anna Horrigan, a 20-year veteran of the intelligence community, according to Claudia Borovina, a spokesperson for the group.

The mission of the team, which reports directly to Nakasone, is to scour for insights, defend against foreign adversaries and “when necessary impose costs,” Borovina added.

In 2018, U.S. Cyber Command took offline Russia’s Internet Research Agency, which the U.S. intelligence community describes as a Kremlin-linked troll farm, in one of the few offensive cyberattacks the U.S. government has admitted to carrying out.

Major General William J. Hartman, who leads the national cyber mission force responsible for protecting the U.S. from foreign threats and who is Macias’s commander, told Bloomberg in a roundtable interview that he expects to see Russian influence operations “increase” at the 2022 midterms given its invasion of Ukraine.

“I expect that there will be a fair amount of domestically generated information that the Russians will freely amplify,” he said.

The U.S. intelligence community said in the same 2021 declassified report that the Internet Research Agency reformed after 2018 as Lakhta Internet Research and ran short-lived troll farms in Mexico, Ghana and Nigeria to influence subsets of U.S. voters in the 2020 election. Hartman said he now expects that group to generate and spread information operations to undermine the midterms.

“We see them active in different places right now,” Hartman said of the group, adding the aim of Russian troll farms and disinformation platforms linked to Moscow’s intelligence services was to create “churn” in the U.S. domestic system.

“It’s good for Russia and it’s bad for us if the Russians create doubt in our democratic process,” Hartman said. “Ultimately, that’s what I think the Russians will be focused on.”

Hartman said any attempt to physically tamper with U.S. election infrastructure – rather than seek to sway voter opinions – would likely cross a red line for the U.S., without explaining what those consequences might be.

A report from the U.S. intelligence community earlier this year predicted Russia would pursue tactics including trying to strengthen ties to U.S. individuals in the media and politics “in hopes of developing vectors for future influence operations” and look for new ways to circumvent efforts by major technology companies to curb disinformation.

Nakasone told the summit the U.S. has previously warned adversaries in advance that it would take action if they sought to influence elections.